Ever ybody likes to debate eur o par ity—yes, no, maybe—and there is plenty to take into consideration, including the risk that something evil happens to the dollar so that the euro is the unintended beneficiary. But the euro has two big factors working against it, the monetary policy divergence that has the German 10 year yield at a lousy 0.25% and now, the threat of terrorism that puts the maintenance of the Establishment, aka Merkel, in question. Merkel faces a high hurdle in next year's election for having taken the humanitarian approach, only to see the rescued dog bite. Just as with Brexit, popular sentiment against immigrants in general and Muslim asylum-seekers in particular can easily rule over all over considerations.

Even before the latest terrorist attacks, capital outflows from the eurozone are the biggest so far this year than any other time in 14 years. The WSJ reports "Eurozone investors bought €497.5 billion ($516.5 billion) of financial assets, such as stocks and bonds, outside the bloc in that period. Global investors, meanwhile, sold or let mature €31.3 billion of eurozone assets during the year. Together, that adds up to a net outflow of €528.8 billion, the most since the single currency was introduced in 1999." See the chart. 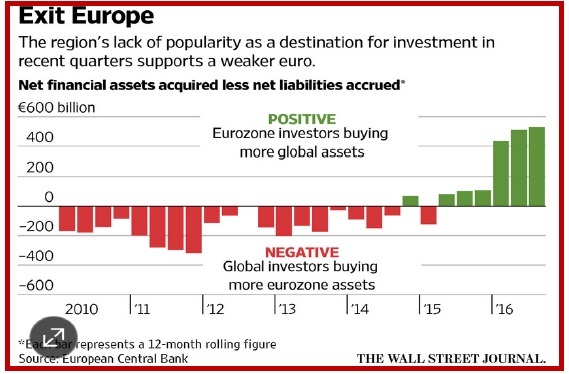 The falling euro and capital outflows become a self-reinforcing cycle. The WSJ names TD Securities, Morgan Stanley, Goldman Sachs and Deutsche Bank as among those forecasting dollar parity and worse next year—and a little ahead of schedule, too, due to the Fed's dot-plot predicting three hikes instead of two.

Deutsche Bank analyst Saravelos noted last Friday that the giant differential gap (2.31% this morning) is the biggest in 25 years and "so large that the dollar will likely continue rallying even if the rate differential stops widening. The last time this happened for more than a few months was in 1979 and 1997; the dollar rallied by 30% and 20%, respectively."

We like economic history but we must note that when you try to create a correlation of the yield differential and the dollar/mark or dollar/euro over a long period, the correlation fails a lot of the time. In fact, the time it works the best is during a crisis.

And two other points: the real relative yield, subtracting inflation, fails to deliver a useful currency forecast. Second, on the chart shown here, clearly the currency move we have right now is an overshoot. We like to think that FX overshoots more than any other asset class. We don't have any hard data on comparative overshooting, but the academic literature on FX features overshooting as a central theme. Danke is one of the doubters of so much overshooting. It has a forecast of 1.02 over the next month. We say this is more like it. Parity is terribly hard to get because it's such a magic number. 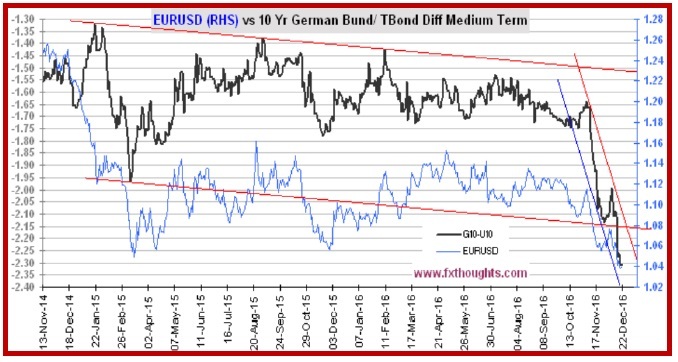 So, while we can appreciate the fundamentals favoring the dollar and the evidence of the euro being out of favor so far this year, we are wary of projecting the trend out into the future indefinitely. Trends never move in a straight line. A shock or series of shocks can derail a trend, and fast. Remember the Chinainspired crisis last January. We think political events will get shrugged off by financial markets, as recent history advises us to accept, but then, we have never had quite this set of circumstances before, chiefly the erratic and almost certainly unqualified Trump.

Having said that, fund manager Dalio thinks we will get a new period of irrational exuberance in the stock market and in overall sentiment because of expected Trump policy changes. Most of Trump's promises are impossible (25 million new factory jobs) or implausible ($1 trillion in new infrastructure by the private sector). But never mind. We call it "irrational" for a reason.

At a guess, we may have an offset to capital outflow from Europe in the form of inflows from China. Bloomberg notes that the yuan is tanking fast. "Traders have turned increasingly negative amid tighter liquidity, sending bets for further losses soaring. The gap between forward contracts wagering on the offshore yuan a year from now versus its current level is heading for a record monthly jump, just as the extra cost for options to sell the currency against the dollar hit a six-month high relative to prices for contracts to buy." Expectations for further depreciation are growing by leaps and bounds, due to the self-reinforcing capital outflows, the US rate outlook and tightening liquidity, perhaps the most this year in over two decades. Not to mention the 45% Trump tariff. We should not forget last January. See the chart of the Shanghai in the Chart Package. We may think we have a good grip on divergence and other determinatives, but China has the potential to shake it all up.

Tidbit: We have long known ther e is a big pr oblem in the Eur opean bank sector . The ECB knows it, too, which is why it took over supervision last year. Not only do we have the Monte dei Paschi scandal that seems likely to lead to a bailout later this week, Spanish banks just got fined for depriving mortgage holders of benefits from falling rates by use of an illegal floor. And the NYT has a story today on a Trump Junior failed property deal in which Deutsche Bank took a giant haircut. Can the banking sector be the source of a new euro crisis? We have faith in Draghi and Company, but keep your eye peeled.

Tidbit 2: A total of 13 top officials in Flint, Michigan ar e being char ged, at last, with the cr ime of allowing lead poisoning in city water. The sage starts with the governor overriding the local election and replacing the mayor and town council with "emergency management" appointees. Those managers changed the source of city water to the Flint River, to save money, without the necessary treatment to prevent lead poisoning. The officials also used new bond money to finance the new pipeline instead of the stated purpose, a pond cleanup. The whole thing points to bad governance, including by the EPA so beloved by liberals.

Tidbit 3: In the US, the Census Bur eau just r eleased a slew of new data, with thr ee sur pr ises: first, the US population grew as the slowest pace since the Great Depression (1936-37). Northeast states are losing population to the West, with New York State and several others actually shrinking. And the "Census Bureau revised downward its estimates of immigration for each year since 2010 by an average of 10%. For this year, it estimated that 999,000 immigrants arrived, down 4% from the prior year."

Politics: Ger man police deter mined the Pakistani r efugee they had ar r ested for the Ber lin tr uck crash was not the right guy and they let him go. Meanwhile, ISIS claimed responsibility, albeit 24 hours after the event when the usual claim comes in less than 12 hours, so this one lacks credibility. Never mind—the probability is very low that the attack was by anyone other than a non-German and probably a refugee. The FT reports the police have a new suspect—a Tunisian.

Merkel thus faces a high hurdle in next year's election for having taken the humanitarian approach, only to see the rescued dog bite. Just as with Brexit, popular sentiment against immigrants in general and Muslim asylum-seekers in particular can easily rule over all over considerations.