It almost never fails; when the masses are shaking in their boots the stock market is often putting in a bottom. We must never forget the sadistic nature of markets. Weak hands are flushed out and the resulting prices, although temporary, are generally good opportunities to get into the long side of the market. Of course, it takes a quick trigger finger and a certain amount of fortitude to step in to catch the falling knife.

The stock market bulls aren't completely out of the woods, there will be some resistance between 2940 and 2960. Nevertheless, aside from some back and filling, we believe the odds are in favor of new all-time highs. Specifically, we see the potential for 3,100 to 3,130.

For those that are looking at this market as being overpriced, keep in mind we have been trading in the 2,800 to 2,900 area since early 2018. Thus, the market hasn't made much progress in almost two years. Further, PE ratios have come down and expectations have been tempered. This should put the bulls in control of stocks and the bears with the upper hand in Treasuries. 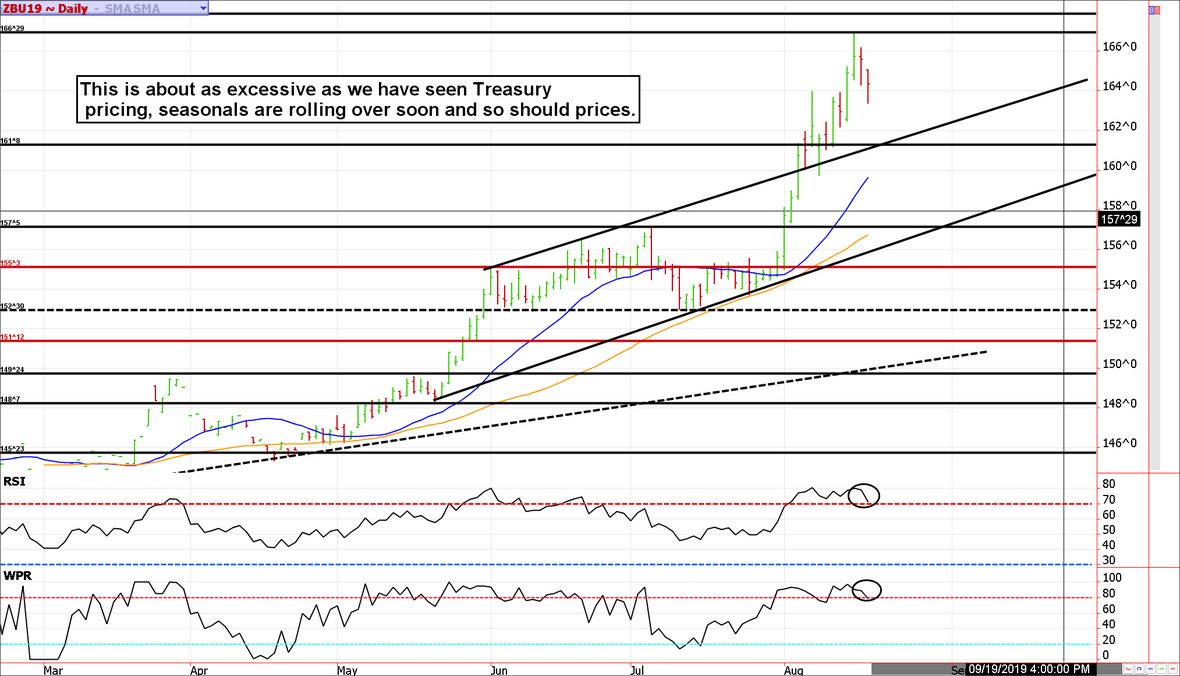 Stats compiled over the previous five years suggest the December 10-year note futures contract tops out in late August. When looking at data over the last 15 years, we see a similar pattern (but with less follow-through selling). In any case, there is a confluence of technical, seasonal, and fundamental resistance overhead. In short, although the short-run will be messy the odds of the Treasury market sustaining recent gains in the intermediate time frame is slim.

Further, if the S&P 500 breaks above its pivot price of 2960, look for Treasuries to experience swift selling pressure. The high-150s would be a likely downside target for the 30-year bond if the market goes into a correction.

We've turned bearish and are looking for a retracement into the mid-to-high-150s in the ZB or the mid-127 area in the ZN. 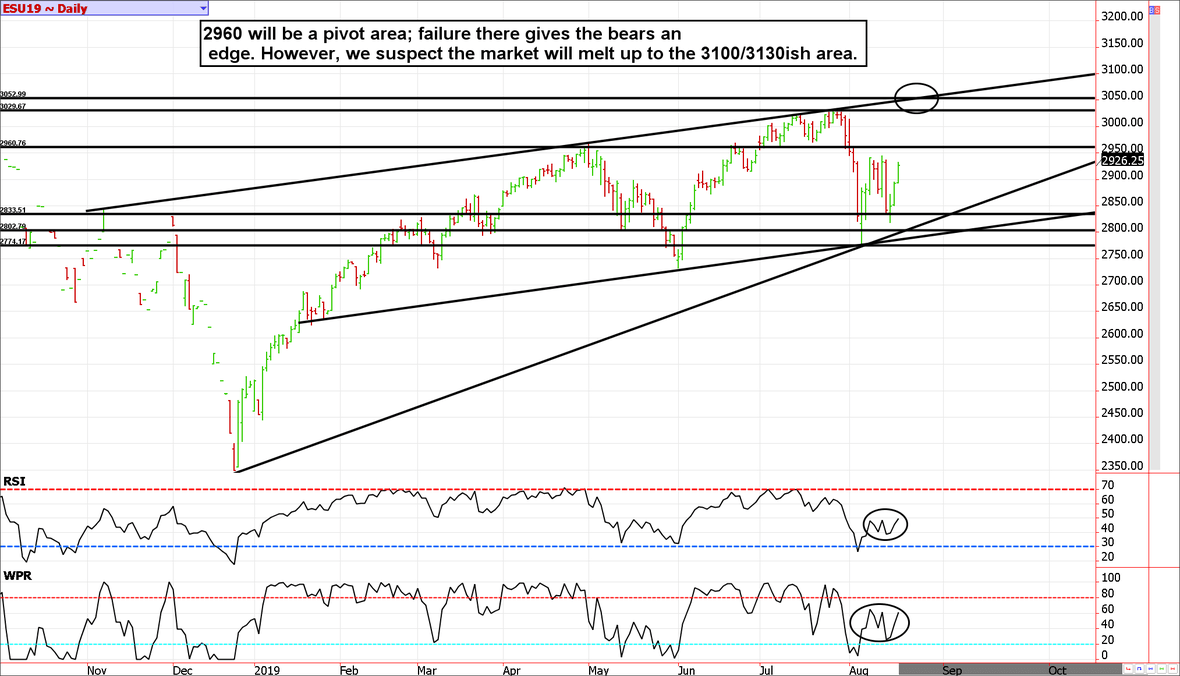 Last week we were talking about 2860 being the pivot price, this week it is 2960. We acknowledge that markets fluctuate and rarely go in one direction, but the overall projection should be new all-time highs. Look for some head fakes and digesting between 2940 and 2960, but don't expect the world to fall apart any time soon. The bad news is probably behind us.

2960 will act as the pivot area, a break above leads the market to all-time-highs.

E-mini S&P Futures Day Trading Ideas
These are counter-trend entry ideas, the more distant the level the more reliable but the less likely to get filled

July 12 - Exit short 127 call in the ZN at a moderate profit (which mostly offsets the losses on previously established hedges).

August 1 - Exit short call spread in silver to lock in a profit of about $400 before transaction costs.

There is substantial risk of loss in trading futures and options.

** These recommendations are a solicitation for entering into derivatives transactions. All known news and events have already been factored into the price of the underlying derivatives discussed. From time to time persons affiliated with Zaner, or its associated companies, may have positions in recommended and other derivatives. Past performance is not indicative of future results. The information and data in this report were obtained from sources considered reliable. Their accuracy or completeness is not guaranteed. Any decision to purchase or sell as a result of the opinions expressed in this report will be the full responsibility of the person authorizing such transaction. Seasonal tendencies are a composite of some of the more consistent commodity futures seasonals that have occurred over the past 15 or more years. There are usually underlying, fundamental circumstances that occur annually that tend to cause the futures markets to react in similar directional manner during a certain calendar year. While seasonal trends may potentially impact supply and demand in certain commodities, seasonal aspects of supply and demand have been factored into futures & options market pricing. Even if a seasonal tendency occurs in the future, it may not result in a profitable transaction as fees and the timing of the entry and liquidation may impact on the results. No representation is being made that any account has in the past, or will in the future, achieve profits using these recommendations. No representation is being made that price patterns will recur in the future.