So, QE ended (so far in Canada, but the Fed will follow suit) and the termination plunged gold prices in Canadian dollars. Will this repeat globally?

Finally! Yesterday (October 27, 2021), one central bank ended its quantitative easing program after gradually reducing the pace of asset purchases earlier this year. Don’t panic though - it wasn’t the Fed, nor the ECB, nor the Bank of Japan. It was the Bank of Canada. As we can read in the monetary policy statement:

In light of the progress made in the economic recovery, the Governing Council has decided to end quantitative easing and keep its overall holdings of Government of Canada bonds roughly constant.

Of course, the central bank didn’t say a word about a reduction of the size of its balance sheet. This is how the dovish bias works: central banks never return to the pre-crisis levels of interest rates or balance sheet. Anyway, I would like to focus on the fact that the central bank of Canada admitted that it underestimated the persistence of inflation, which could remain elevated next year:

The recent increase in CPI inflation was anticipated in July, but the main forces pushing up prices – higher energy prices and pandemic-related supply bottlenecks – now appear to be stronger and more persistent than expected.

We remain committed to holding the policy interest rate at the effective lower bound until economic slack is absorbed so that the 2% inflation target is sustainably achieved. In the Bank’s projection, this happens sometime in the middle quarters of 2022.

The direct consequences of the Bank of Canada ending QE should be limited, as the BoC’s actions are not too meaningful for the global financial markets. However, yesterday’s decision is emblematic of the current shift among central banks from monetary easing into monetary tightening. Investors should be thus prepared for more persistent inflation and for a hawkish response of central banks.

Interestingly, while the BoC has just completed its asset purchases program, the Fed is only going to start tapering its own quantitative easing program. It means that the US central bank is tardy and behind the curve (especially that inflation in Canada is lower than across the border). So, its reaction will have to be stronger in the future. The market expects the first hike in the federal funds rate to happen in June 2022, so also in the middle quarters of 2022, despite the Fed’s one-year lag behind the Bank of Canada.

Gold may struggle until the Fed’s tightening cycle starts. You have been warned!

What does the end of Canadian quantitative easing imply for the gold market? Well, the direct impact on gold prices denominated in greenbacks should be minimal. However, the decision to stop QE exerted a huge impact on the price of gold denominated in the Canadian dollar. As the chart below shows, the price plunged yesterday from about 2228 CAD to C$2204 CAD within minutes. 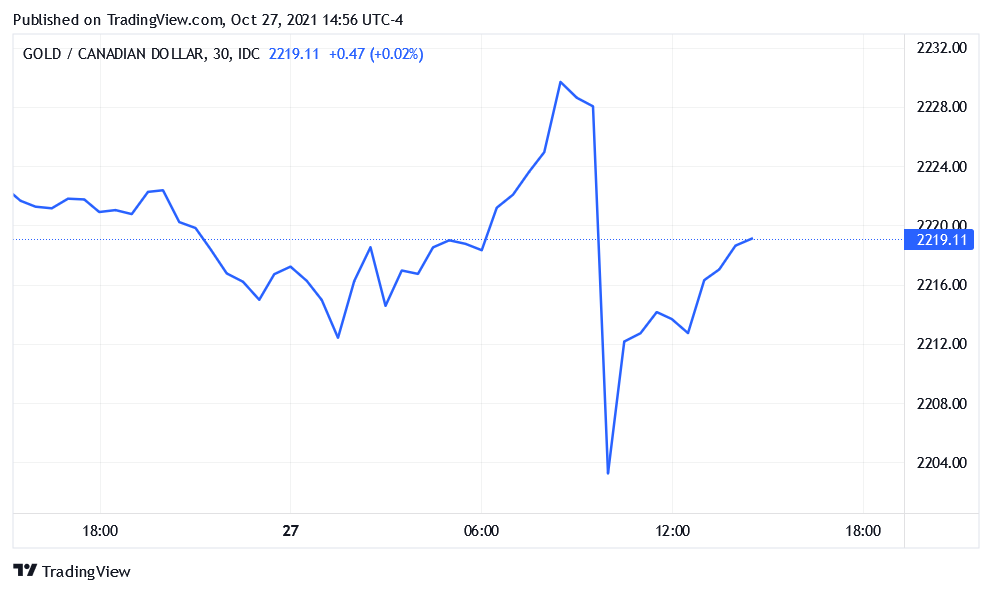 This drop may be a harbinger of what may happen in the international gold market when the Fed tightens its own monetary policy. Of course, the announcement of tapering at the November FOMC meeting was widely expected. However, please remember that the message of tapering could be accompanied by other hawkish signals as well. So, although gold has been moving upward recently (see the chart below), its struggles could continue for a while. 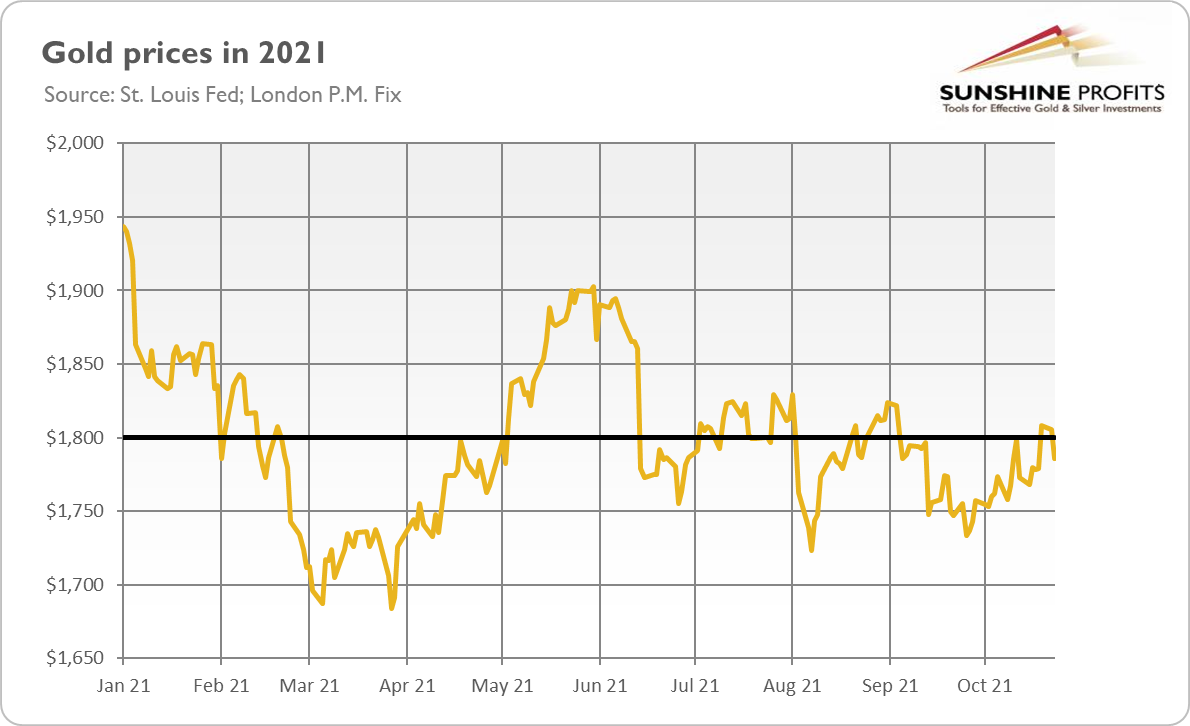 The silver lining is that the drop in the gold price in CAD – although abrupt – wasn’t too deep overall and reversed quickly. To be clear, a 1% drop is relatively large, but it’s not a total disaster, especially given the prominence of the event. It seems that inflation worries currently provide support for gold prices.