Ahead of the employment reports later this week (starting with ADP tomorrow), today we get motor vehicle sales. We know the used car market is flooded as car rental agencies like the bankrupt Hertz unload their fleets, but are responding to screaming TV ads for all kinds of cost cuts on new cars?  We already saw vehicle sales down to 8.60 million in April from 11.40 million in March. Forecasts for May are for 11.1 million, and CoxAuto says the relatively lower incentives this year around Memorial Day implies a nice surge in sales. We have doubts, if only because car companies and banks are extending leases for six months, delaying the new car purchase decision. Leases account for about 30% of new auto purchase, according to Statistica. We are keeping our Subaru to March.

Another bit of grim news is yesterday’s release of data on commercial property defaults and delinquencies. We care about this because the Commercial Mortgage Backed Securities market is about $1.3 trillion and the assets are devilishly hard to value from the outside. The FT reports unpaid loans tripled in May and “The delinquency rate on loans underpinning commercial mortgage-backed securities rose from 2.3 per cent in April to 7.4 per cent in May,” with another 8.6% in the 30-day grace period. By June, all the grace periods will be exhausted. Lodging (hotels, malls) are the most at risk. “More than 19 per cent of the lodging loans wrapped up in the CMBS market became delinquent in May, according to Trepp, up from 2.7 per cent in April. A further 15.6 per cent of loans were behind on payments, but less than 30 days overdue. In the retail category, the equivalent figures were 3.7 per cent in April and 10.3 per cent in May. Another 13.4 per cent of loans are now in their grace periods.” Some bonds valued at over 94¢ in early March are now 56¢.

It's only the beginning of the end. According to the Congressional Budget Office, it will take the US almost a decade to recover from the pandemic—in Q4 2029. Government spending so far can only mitigate. Q4 this year will be a 5.6% contraction from the year before. The PMIs from around the world, including the US, do seem to show the bottom is in, but unemployment is at historic highs and therefore consumer demand cannot be expected to work its usual magic. The Markit chief economist said “Whether growth can achieve any serious momentum remains highly uncertain, however, as demand looks set to remain subdued by social-distancing measures, high unemployment and falling corporate profits for some time to come.”

The CBO uses the “swoosh” symbol to depict the recovery, but as we said before, it’s probably a series of swooshes and it’s dangerous to see all the data as becoming less-bad with every release. 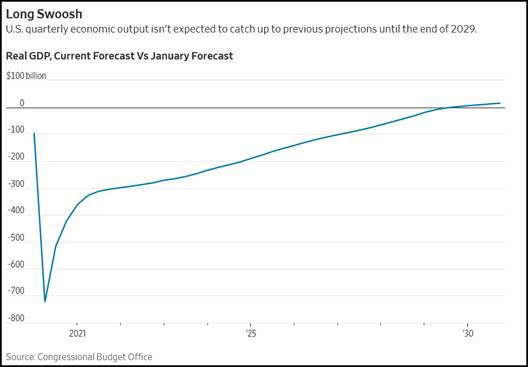 For the more immediate future, GDP contracted 5% in the first quarter and is likely to be worse in Q2. The Atlanta Fed NowCast for Q2 yesterday steepened the curve from 51.2% on Friday to 52.8%, based pretty much of the ISM report. We get another NowCast on Thursday. 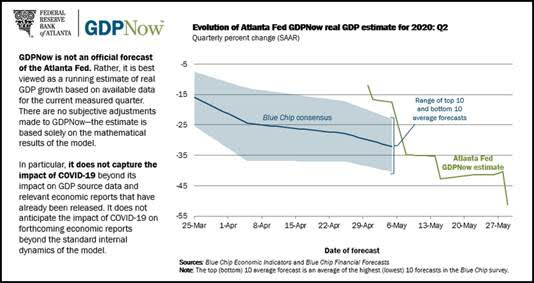 The ability of traders and investors to brush off really bad data because it’s less-bad than before—that is, thinking the worst is behind us—is puzzling. Granted, no one has a crystal ball, but it still seems irrational that equity markets persist in rising while everything points to falling demand, deflation, and supposedly of interest to the equity gang, falling earnings. You can’t help thinking of Keynes’ comment that the market can stay irrational longer than you can stay solvent.

While the stock market is our proxy for perception of risk, and FX is happy to unload a too-big inventory of dollars, we continue to worry that the threshold for a crisis can’t be pushed out indefinitely.

Political Tidbit: The press has its hair on fire over Trump saying he will set the US Army against the US people. The protests all around the country are accompanied, as usual, by looting and property destruction, which is counter-productive to the intent of the protests and very badly managed by the police. The protests this time are the worst since the King assassination riots in April 1968. Then-president LB Johnson used Marines and Army soldiers to guard the White House, the last time a president used US military against a mob until Trump.

But Trump is doing it very badly. His speech to the governors was incoherent and frightening. He said he was putting the Chairman of the Joint Chiefs “in charge” but not in charge of what. He also had Defense Secy Esper speak (Esper is a former defense contractor lobbyist). Esper said "I think the sooner that you mass and dominate the battlespace, the quicker this dissipates and we can get back to the right normal. We need to dominate the battlespace."

Two key words—dominate and battlespace. The very concept of battlespace means the US military against an enemy, and the enemy is the citizens.  Even law-and-order types are horrified. Can Trump put the US military against the citizens? Well, yes. The Posse Comitatus Act (1878) forbids the use of US troops for domestic purposes (originally to end using troops to police state elections after the Civil War), but is has exceptions. As we saw during the formation of the Homeland Security apparatus, the feds examined those exceptions very carefully.  Exceptions include state governors using the National Guard—and “Pursuant  to  the  presidential  power  to  quell  domestic  violence, federal  troops  are  expressly  exempt  from  the  prohibitions  of the Posse  Comitatus  Act,  and  this  exemption  applies  equally  to active-duty military and federalized National Guard troops.” We don’t know if that exception is correct—nobody else is quoting it, and it comes from far-righty Rand.

Then there is the Insurrection Act of 1807, which gives the president the power to use the military within the United States in special circumstances, including to suppress “civil disorder, insurrection and rebellion.”

Trump is seemingly overwhelmed by both the pandemic and the protests, and might actually understand that his usual lashing out is dangerous, hence the vagueness and incoherence. His number one goal is reelection, so everything going forward needs to be seen in that light. A strong military response might appeal to the law-and-order base, but repel those white suburban women whose majority he got last time. The military response certainly repels younger people, who don’t remember Kent State but are getting the same message this time. We might even say Kent State cemented a liberal generation that started with  Carter in 1976.