Market Update: Stocks rallied again yesterday after a volatile overnight session. Markets first tanked on reports that China was set to cut its visit short in the U.S. Then rallied again once reports surfaced that a currency pact could be part of a trade deal with China. The S&P 500 (IVV) finished higher by 0.71% on the day. Oil was also higher, closing up 1.83%. Copper was strong, rallying 1.77%. Bonds, gold, and the U.S. dollar were all weaker. 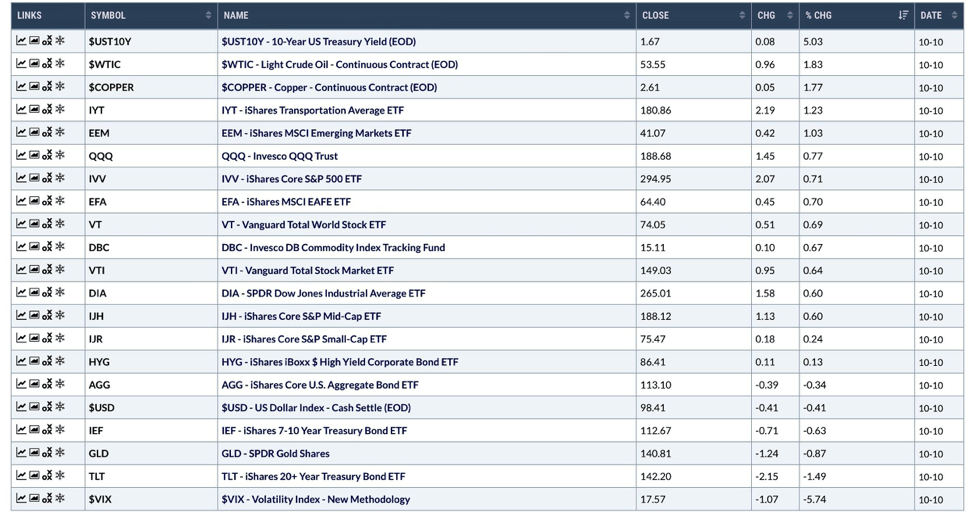 Economic Data: The consumer price index was reported yesterday and is up 1.76% year-over-year. The consumer price index peaked at close to 3% in mid-2018 and has slowed considerably since then. Growth and inflation are still slowing on a year-over-year basis and have been for the better part of the last year. Despite the news media's focus on trade wars, the economy has been experiencing a classic late cycle slowdown. 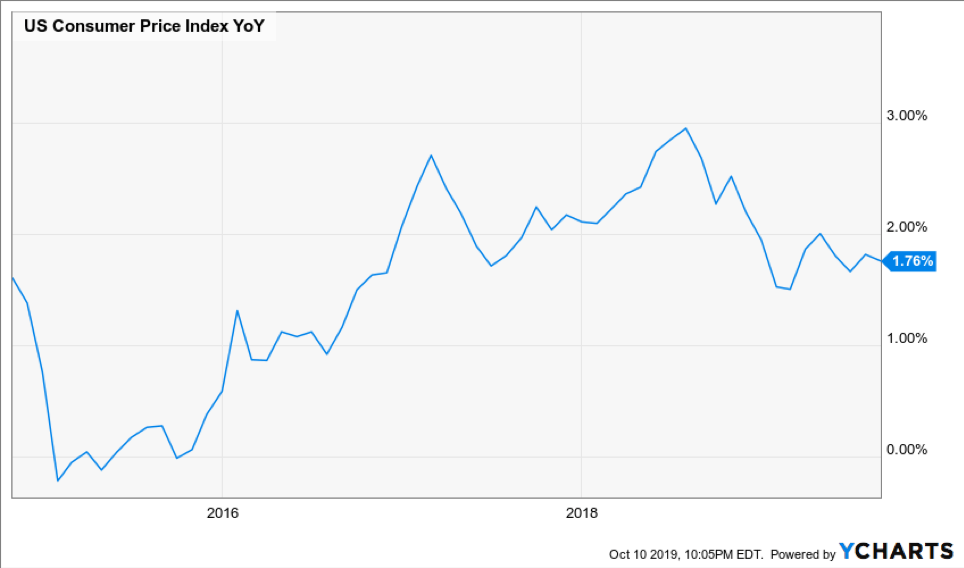 Copper: Copper rallied yesterday and has successfully held support recently. If copper can stay above key support between 2.50-2.60, it might have a shot at a rally back to the falling 200-day moving average. Currently, copper remains in a negative trend. Any positive developments from copper could suggest an acceleration in global economic growth, so we will be watching this industrial metal closely.

Crude Oil: West Texas Intermediate Crude oil moved higher by almost 2% yesterday. Crude oil is currently below its 200-day moving average and at the top end of its support range of 50-52.5. Oil needs to successfully hold support here and break back above its 200-day moving average to indicate a change in trend. A global economic recovery brought about by fiscal and monetary stimulus could cause a temporary boost in inflation expectations. This just might be the trick to take oil higher. We will have to wait and see.

Consumer Discretionary vs. Consumer Staples: Discretionary rallied against staples yesterday, demonstrating a more risk-on posture from market participants. However, the trend remains in favor of staples and defensive exposures. The ratio is still below its 200-day moving average and has made a series of higher highs and higher lows since peaking in mid-2018. A breakdown below the December lows would be a negative development and indication of further downside in equities markets. A breakout above the 200-day moving average would see discretionary back in favor and imply further upside in risk assets.

Chart of the Day: The chart of the day comes courtesy of Crescat Capital. It features the relationship between the year-over-year percentage change in job openings (white) and nominal GDP (red). There is an obvious correlation between the two data sets. The Job openings data is implying that nominal GDP should continue lower on a rate of change basis. 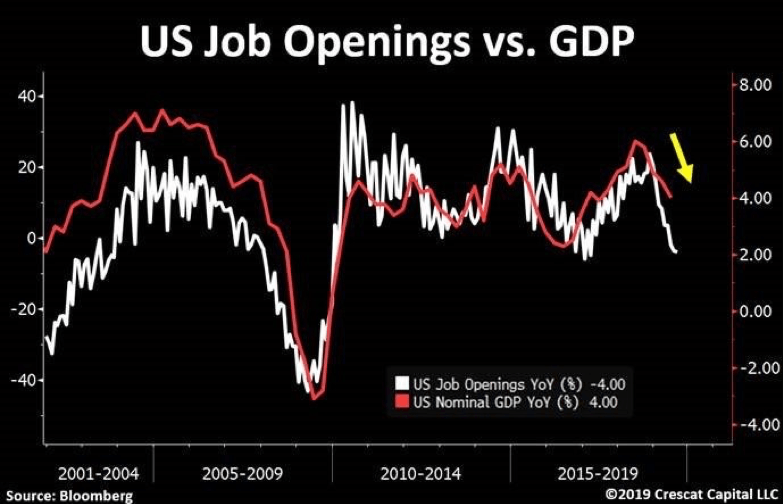 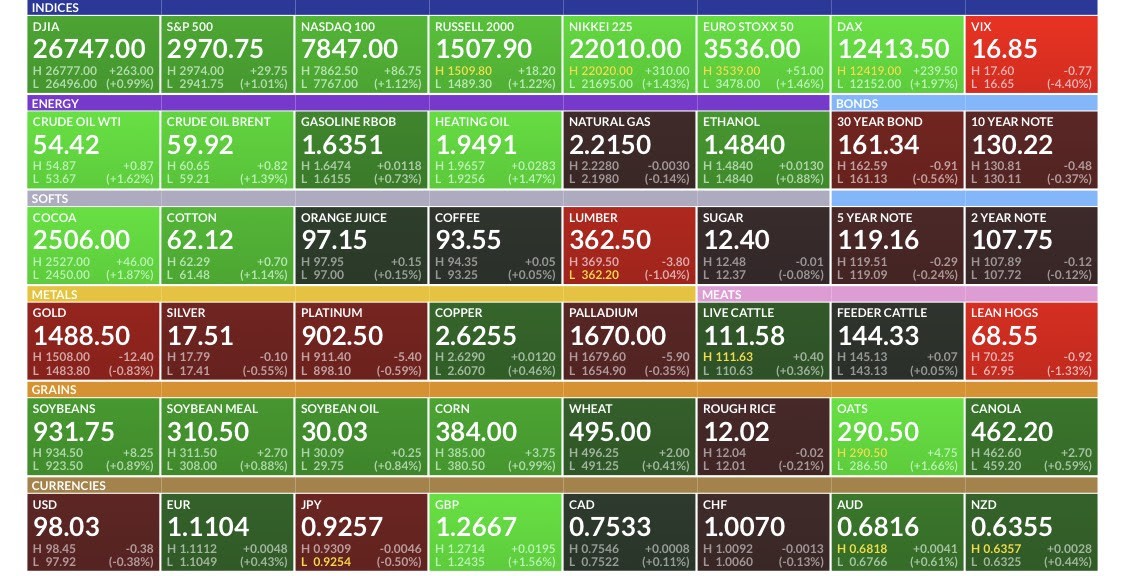 Iran said missiles struck one of its tankers in the Red Sea. The incident caused a jump in crude prices and an oil spill. Iran's NITC initially said the missiles probably came from the direction of Saudi but later withdrew the claim. The market has been entirely too complacent given that we're one security incident away from a war, said Helima Croft, chief commodities strategist at RBC.

President Trump meets with Chinese Vice Premier Liu He at 2:45 p.m. ET. High-level talks are progressing into a second day and there's optimism over the prospects for a partial deal that may lead to a temporary truce. But some analysts are skeptical a currency pact will be part of it as that would invite a stronger yuan, which China wants to avoid. Have a look at our trade war timeline.

The Nobel Peace Prize went to Ethiopian Prime Minister Abiy Ahmed. He was honored for his efforts to achieve peace and international cooperation, and in particular for his decisive initiative to resolve the border conflict with Eritrea. It's the second successive year the prize has gone to an African—last year Congolese doctor Denis Mukwege was the joint winner for his work against sexual violence.

PG&E restored power to more than half the 738,000 customers affected by its blackout but faced growing anger for orchestrating it in the first place. Governor Gavin Newsom, who previously called the move "appropriate," took a harsher tone: This isn't a climate change story but one of greed and neglect. What's life like in a mass blackout? Dark shops, spotty phones and rotting fish.

Oil jumped after the attack. U.S. equity-index futures rallied with European and Asian stocks amid growing hopes of a trade deal. Shares in Hong Kong surged as protesters debate a halt to vandalism. Treasuries, the yen and gold were little changed.

The Australian dollar remains among the weakest, and at risk of breaking below a multi-decade low of 0.6670. Waiting for Australian data to be out later this week.

Gold prices at inflexion point, now at the mercy of the Fed, Wall Street and US elections

Gold has been consolidating with a large speculative build up in the 1560s and the largest divergence between large speculators and commercials since Jan-March 2018, signalling that the market could be at an inflexion point.