In two weeks, Tom Brady vs. Patrick Mahomes will battle in the Super Bowl as the old guard vs. the new era. What's happening in the market right now is no different.

Think of Tom Brady as the hedge funds. As old Wall Street. As the suits. Think of Patrick Mahomes as the Reddit/Robinhood investor. The young renegade who could change the face of football or the stock market as we know it.

What's happened so far in 2021 is more significant than "stonks." What's happened is deeper than GameStop (GME) and AMC (AMC) surging by an astounding 1914.55% and 890.05%, respectively, year-to-date, thanks to these small- time investors.

We can make all the goofy stonk memes and laugh about how two has-been companies have suddenly become the new Bitcoin all we want.

But what happened is the potential changing of the guard of who the market-makers are.

I've been talking about a tug of war between good news and bad news and overvalued stocks (and "stonks") for weeks. But we have a new tug of war between the suits at Wall Street hedge funds and Reddit/Robinhood traders. The parallels between Brady vs. Mahomes are palpable.

The suits, aka the Tom Bradys, have been controlling the market for decades, manipulating it at their will.

But recently, a Reddit group called "WallStreetBets," i.e., the Patrick Mahomes traders, caught on to their game. This group made a joke about how poor GameStop's prospects were and how hilarious it was that hedge funds were shorting it en masse. So they banded together, bought enough shares of the stock to send it soaring, then forced the hedge funds to cover their shorts by buying it up some more!

WallStreetBets succeeded so much that they ended up closing a hedge fund's entire GameStop position !

Mahomes beat Brady in a blowout. 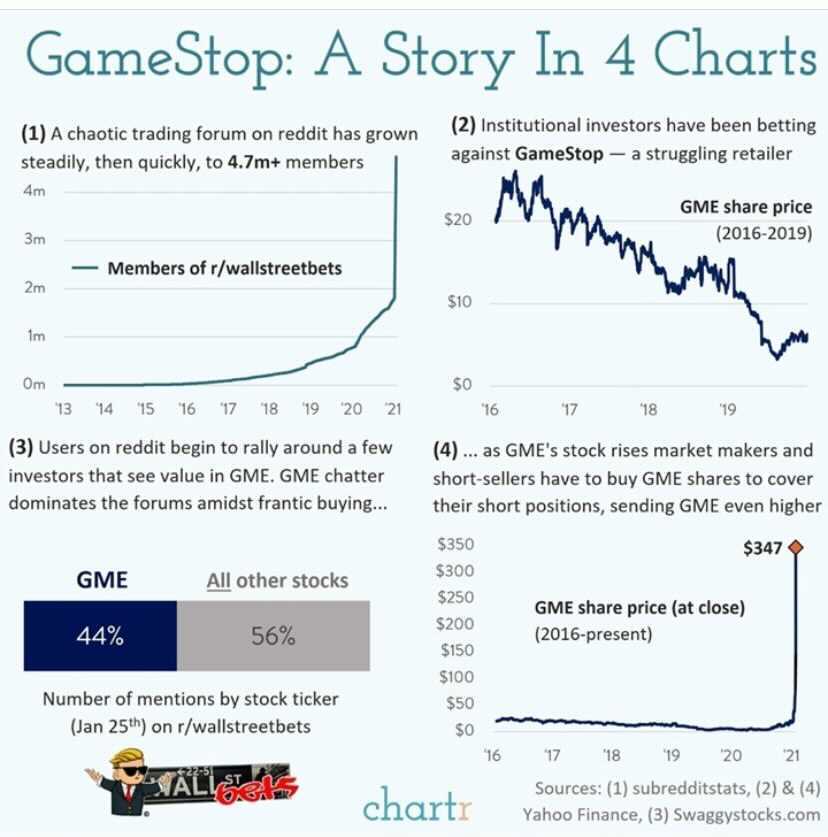 Granted, what happened on Thursday (Jan. 28) when Robinhood and other trading platforms halted all trading of GME, AMC, and other "stonks" of the like is disturbing. People are complaining about censorship on social media, and this is no different. It's a war against the little guy.

But what does this show you? The power is in your hands now.

The suits are officially quaking in their fancy shoes and had to resort to drastic moves like this. These multi-billion dollar hedge funds probably called Robinhood in tears saying to stop the trades. Hedge-fund manager Leon Cooperman said as much when he appeared on CNBC Thursday with a sob story. It's quite similar to someone prominent who demanded to "stop the count" and "stop the steal" a few months ago.

Don't let this deter you from chasing your goals.

Now would I buy these stocks? No. It's not my style and not my philosophy. I think it's detached from reality and a dot- com bust all over again.

GameStop, AMC, Blackberry (BB), and Bed Bath and Beyond (BBBY) had predictable crashes on Thursday (Jan. 28) (partially thanks to the brokerages). Complacency is the most significant near-term risk to stocks by far, and I have been warning about this for weeks. But I tip my hat to all those who profited.

My goal for these updates is to educate you, give you ideas, and help you manage money like I did when I was pressing the buy and sell buttons for $600+ million in assets. I left that career to pursue one where I could help people who needed help, instead of the ultra-high net worth.

With that said, I still think we are long overdue for a correction since we haven't seen one since last March. The manic moves of the past week excite me but concern me greatly.

Corrections are healthy for markets and more common than most realize. Only twice in the last 38 years have we had years WITHOUT a correction (1995 and 2017).

A correction could also be an excellent buying opportunity for what should be a great second half of the year.

Therefore, to sum it up:

While there is long-term optimism, there are short-term concerns. A short-term correction between now and Q1 2021 is possible. I don't think that a decline above ~20%, leading to a bear market will happen.

Hopefully, you find my insights enlightening. I welcome your thoughts and questions, and wish you the best of luck.

We're all in this together!

The S&P 500 Recovered After a Needed Breather This Week 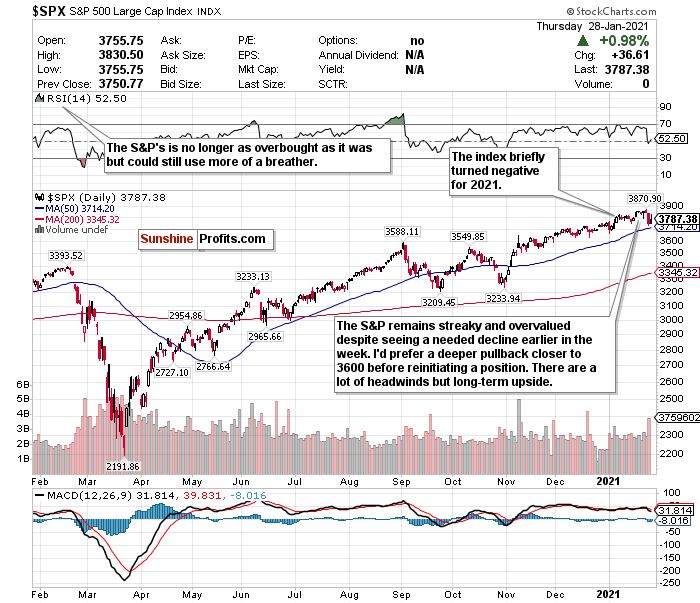 The S&P briefly turned negative for 2021 after seeing its worst sell-off in nearly three months on Wednesday (Jan. 27). It saw a reliable recovery Thursday (Jan. 28) and is now up roughly 2.40% for the year.

However, it's down nearly 1.75% week-to-date. It's a much needed cool-off period of the S&P, and I feel that there could be more dips to come. The S&P remains around the 3800-level and has not been moved by what has been a week full of quality earnings. Remember- when the market usually gets what it expects, it's usually a reason to sell more than buy. While they are largely beating estimates, earnings are not beating them to the point of exciting investors.

I also remain concerned about the S&P's valuations. Although its RSI is not overbought and in hold territory, I'm still worried about the S&P's forward P/E ratio, which is the highest it's been since the dot-com bust.

Ned Davis Research also noted that the trailing P/E ratio of the median U.S. stock has never been higher in history, and fewer than ⅓ of S&P 500 stocks are trading under the long-term average 15 P/E.

What intrigues me about this index is that it seems to go on multiple day win streaks and lose streaks. After seeing a similar sell-off to what it saw on Wednesday (Jan. 27) three weeks ago, it went on a four-day win streak and broke past 3800. It went on a three-day losing streak this week before seeing its recovery Thursday (Jan. 28).

I like this decline in the S&P, and if Friday's (Jan. 29) futures hold-up, it could mean the S&P's second losing week in three. I would like to see a more profound drop to around 3600 or below before making a BUY call for the long-term.

There is a legitimate upside for the second half of 2021, but I would prefer to maximize it from a lower level. Discount shopping can be fun in the long-term.

A short-term correction could inevitably occur by the end of Q1 2021, but for now, I am sticking with the S&P as a HOLD.

For an ETF that attempts to directly correlate with the performance of the S&P, the SPDR S&P ETF (SPY) is a good option.