Interrupted supply, a recovery in demand, cheap money and lots and lots of debt. Sounds like a recipe for stagflation, and this is certainly the theme of many commentators. But it is a view which we believe has absolutely no substance. Here's why.

Stagflation is a combination of very weak or potentially even negative economic growth, coupled with rapidly and persistently rising prices. It was last seen in developed markets in the 1970s in conjunction with rising oil prices thanks to an OPEC-driven crude shortage and the accommodative stance of central banks.

At the time, it was regarded as a terrible outcome. Households saw the value of their savings reduced by high inflation  - though this was typically measured in high single or low double digits – and not the hyperinflation of the 1930s. Using the United States as a benchmark (their experience was echoed in Europe), inflation hit peaks of about 12.5% in 1974 and then 15% in 1980.

What is most notable about growth in this period is that it was not particularly weak by today’s standards. Though the eventual tightening that followed high inflation did lead to recessions in 1975 and between 1980 and 1982, as accommodation was eventually followed by restraint. The inter-recessionary periods saw strong growth, often in excess of 6%. Smoothing the business cycle with 12-quarter moving averages, growth was clearly more volatile than it has been in recent years, but it was still closer to 3% on average outside the recessions than the modern-day equivalent, which is closer to 2.0%. 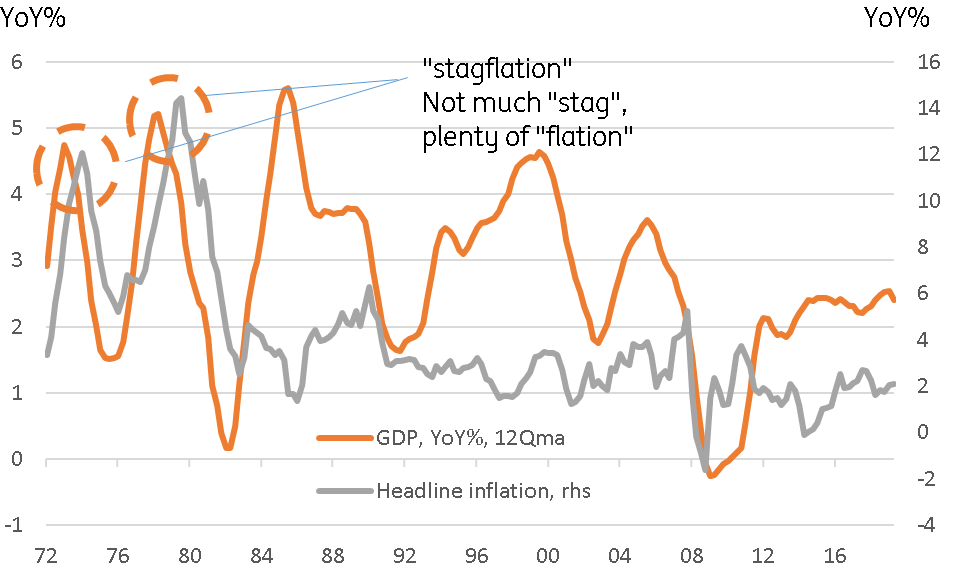 A little inflation would be great, if we could get it

You might argue therefore that a bit of 70s style stagflation might be a decent trade-off for what we have now. Growth will eventually recover from the Covid-19 outbreak and associated lockdowns, and with plentiful bottlenecks in supply, some price spikes are highly probable when this happens. What is needed then for stagflation is for wages to increase, leading to an upward spiral in prices, as firms raise prices again to maintain margins. It has even been suggested by some that letting inflation rise to 4% for a decade or so, could undo much of the debt build-up that is taking place during this pandemic.

And yes, a bit of higher inflation would certainly help deflate away this debt if it could be created. We might also note the recent pick up from very low levels of benchmark prices of crude oil at the behest of OPEC supply constraints. All the ingredients seem to be falling into place, don’t they?

But just as a cake will not miraculously spring from a bowl of flour, sugar and eggs without some means to bake it, stagflation requires a mechanism to allow wages to push higher in the face of rising prices and embed them into accelerating prices.  At its heart, stagflation requires a wage-cost push spiral to happen. For most of the world, the mechanisms that once allowed this to occur simply do not exist anymore and will probably never do so again.

No mechanism = no stagflation - simple

There is no single factor here that is critical, but the following are all reasons why that wage-cost push mechanism is no longer in play, and unlikely to return in our lifetimes.

Could we see some bounce back in inflation from a reversal of globalisation? Prior to the pandemic, globalisation would also have been another factor in the list above.

And yes, post-Covid-19, some rethink of supply chains is likely. But we are probably talking about more redundancy being built into them, rather than an outright return to autarky. So the degree of the shift may be quite minor.

That said, we would certainly concede that the disinflationary impetus from ongoing globalisation might lessen or even reverse for a time. But on its own, it’s not enough, and we would still be missing the mechanism that takes rising prices, say due to a supply bottleneck, and then embeds them in faster wages growth, resulting in a squeeze in margins, and a further increase in prices and so on.

This deglobalisation/supply chain story is, in our view, about the only conceivable scenario in which we might see prices rising for long enough, and on a broad enough front to become embedded in price-setting behaviour. And even then, it is hard to see this affecting wage setting, so ultimately, its main effect will be to weigh on real purchasing power and activity. More likely, pockets of higher inflation will spring up where supply constraints are greatest but be dominated by the much weaker demand environment elsewhere.

Indeed, the persistence of large output gaps in much of the developed world following the global financial crisis could be another reason to downplay inflation risks following the pandemic. That said, the link between inflation and economic activity seems particularly weak, and unless the impact is asymmetric (which is a plausible and interesting thesis, but one that is beyond the scope of this article), then for balance, we probably shouldn’t make too much of this as an additional argument for inflation remaining low. We don't believe it's a necessary condition in any case.

Stagflation - not quite the horror story that is suggested

Stagflation, despite the bad name it got in the 1970s, enabled my parents and many others to buy a house they couldn’t really afford and to pay down its mortgage. Because even though they were paying high mortgage interest rates, they also saw their wages rise at percentages that meant that their stock of debt to incomes ratio quickly dwindled. Before long, that left more money for other things. At least, until the 1980s, where monetarism and wage restraint (often through the public sector) came into vogue, delivering recession as it cured the earlier inflation excesses.

So when I read yet another article warning of the dangers of stagflation, (for FT subscribers, this from Stephen Roach is a good example) I’d like to remind the authors that in the current environment, with debt ratios hitting previously unimaginable highs, it could be an outcome to grab with both hands, not to recoil from in horror.

And like the article that suggested running inflation at 4%, just like those that suggest central banks run economies “a little hot,” the key unanswered question is a blisteringly simple one, “how?”

These same central banks have presided over economies with unprecedentedly tight labour markets, running monetary policy in a more accommodative way than at any time in history. And still, they have mostly not even managed to get inflation to reach the mid-point of their inflation targets except for temporary oil-price induced flurries in the headline rate. Let’s be very clear, if they couldn’t get inflation to 2% then, they certainly aren’t going to be able to achieve 3% or 4% now.

Without the mechanisms to embed rising prices into a wage-cost-push inflation spiral, and with monetary policy impotent to create demand-pull inflation, this higher inflation, whether accompanied by low growth or not, simply isn’t going to happen. And all the navel-gazing and quasi-academic consternation about inflation expectations becoming “unanchored” count for nothing if inflation just cannot gain a toe hold in the modern economy.

High debt is a problem, stagflation is not the obvious answer

I do tend to agree with some of the comments by those writing such articles that getting debt to “disappear “will be an important pre-requisite for re-invigorating growth following this pandemic. How to achieve this is a question that we have some years to debate. But it is unlikely to be by deflating it away.

Read the original article: Stagflation is not the logical consequence of this pandemic

The USD/JPY pair moved sideways around 107.80 for the majority of the day but lost its traction during the American session. As of writing, the pair was down 0.1% on the day at 107.58.