GDP growth in 3Q19 could be 0.5% QoQ, which would be slightly weaker than the BBVA Research growth forecast for the year as a whole (2.3% YoY). The available figures indicate some signs of weakness in domestic demand, while external demand may grow again despite the international picture remaining turbulent. Finally, the slowdown in employment consolidated, while price changes reinforce evidence of a lack of inflationary pressures.

With almost 50% of 3Q data available, the MICA-BBVA model1 shows that GDP growth for the quarter could be 0.5% QoQ (see Figure 1); this would be at the lower end of the forecasting range presented at the beginning of the quarter (between 0.5% and 0.7% QoQ). This estimate reinforces the downward trend that, following the surprise decrease observed in 2Q (0.5% QoQ versus a forecast of between 0.6% and 0.7% QoQ), is threatening to undermine the BBVA Research forecast for 2019 (2.3% YoY).2 As a result, expectations of an economic slowdown are growing, in an environment subject to several significant risks.

For 3Q19, consumer spending and expectation indicators, along with labor market figures, point to the stabilization of private consumption at a moderate growth rate, although slightly above those observed in the first semester (see Figure 2). For their part, the budget execution data suggest that public consumption could maintain the growth rate observed in the first half of the year. 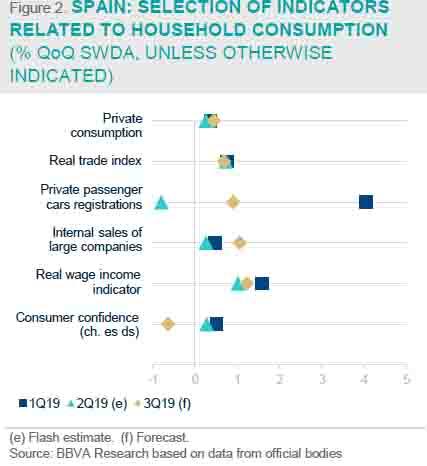 With regard to investment, the partial indicators suggest that investment in machinery and equipment could stagnate or increase very moderately after the fall observed last quarter, while residential investment could grow, albeit more weakly than during the first half of the year (see Figures 3 and 4). 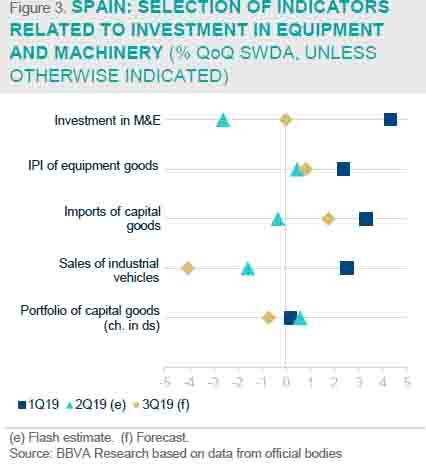 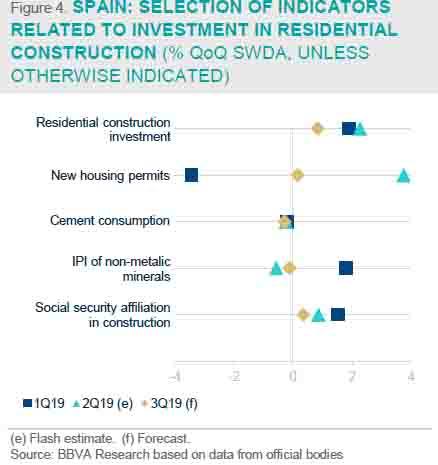 External demand may grow again, but uncertainty remains due to the international situation

The available figures suggest that, after regaining traction in the second quarter of the year, exports of goods could maintain a slightly positive trend during the third quarter (see Figure 5). In contrast, doubts about the evolution of sales of services abroad in the short term are higher, following the new setback observed at the close of the first half. It should be noted that the performance of the tourism sector during the summer period was again not very dynamic compared to that observed in recent years (see Figure 5). 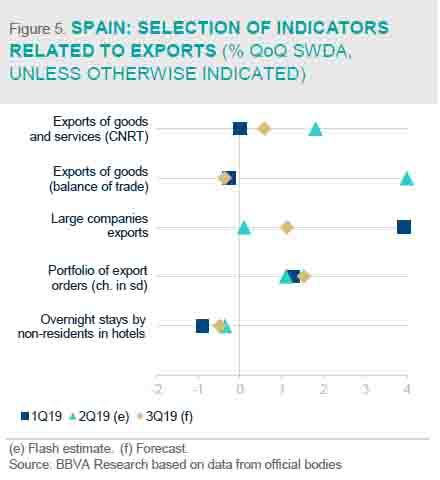 The sluggishness of the labor market continues BBVA Research forecasts indicate that the number of Social Security registrations will have increased by around 24,000 people in August, 3,000 more than in July, but 14,000 less than the average for the first half. After increasing in June and July, unemployment fell slightly in August (-4,000 people SWDA) (see Figure 6). If this lack of traction continues in September, 3Q19 could close with a slowdown in the rate of job creation from 0.1pp to 0.5% QoQ SWDA and with a near stagnation in registered unemployment, breaking the downward trend seen since 2Q13.

No sign of inflationary pressures from demand Headline inflation fell slightly last month (0.2pp to 0.3% YoY) as a result of downward pressure from the energy component. The core rate remained slightly below 1.0% YoY, a barrier that has not been broken since May 2018. The rise in headline inflation in August was 0.6pp lower than that registered in the EMU countries as a whole. BBVA Research forecasts indicate that the difference in the core component (which excludes energy and unprocessed foodstuffs) is practically zero.

Looking forward, headline inflation is expected to remain at low levels, while core inflation will probably stay slightly below 1.0% for the remainder of the year.