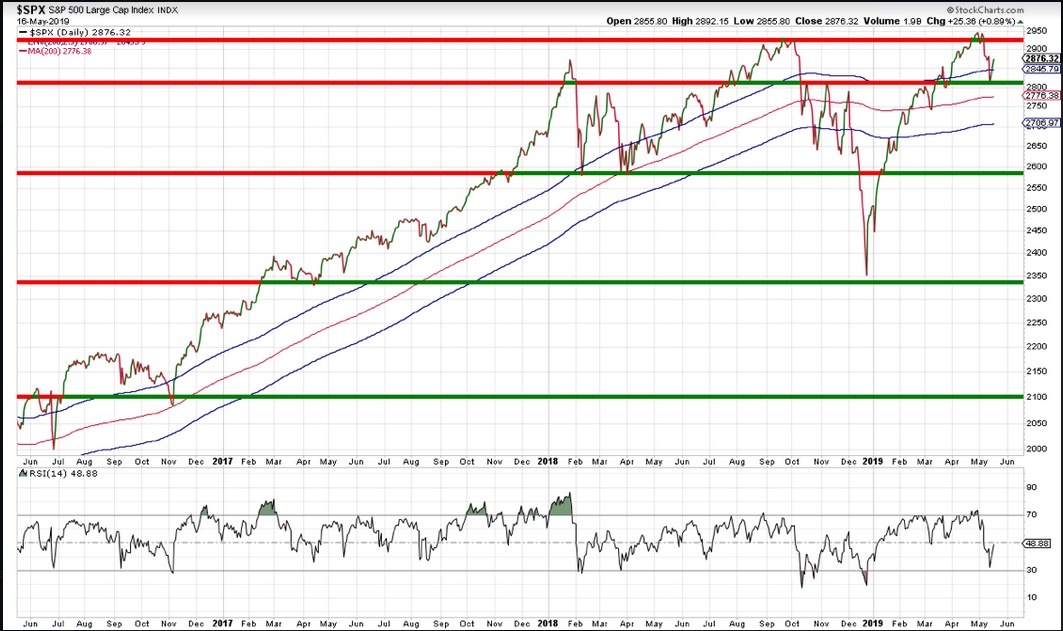 Economic Update: The Philly Fed manufacturing index came in at 16.60, up from 8.50 the month prior.  Housing starts were also better than expected, up 5.74% for the month. Housing starts were an encouraging sign due to the recent, bleak economic data that was released this month.  Housing is a leading indicator to the broader economy and strength is welcomed. 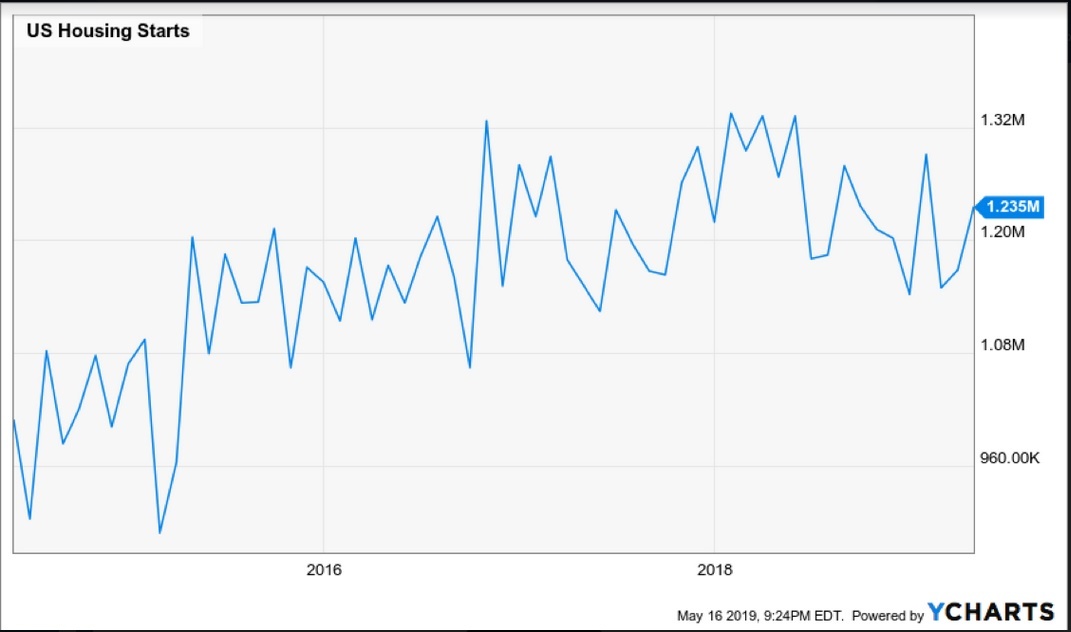 % of stocks above the 50 day: The recent drop in the S&P 500 took the index that tracks the percentage of stocks that are above the 50 day moving average down to 38%.  As of the close yesterday, over 50% of the stocks in the S&P 500 are above the 50 day moving average. This measure of short-term breadth is still on a point and figure sell signal despite reversing back into a column of X’s, suggesting the percentage is moving up.  A continued improvement in this short-term measure would be bullish for the broader market as the indicator did not reach oversold levels when it bounced. 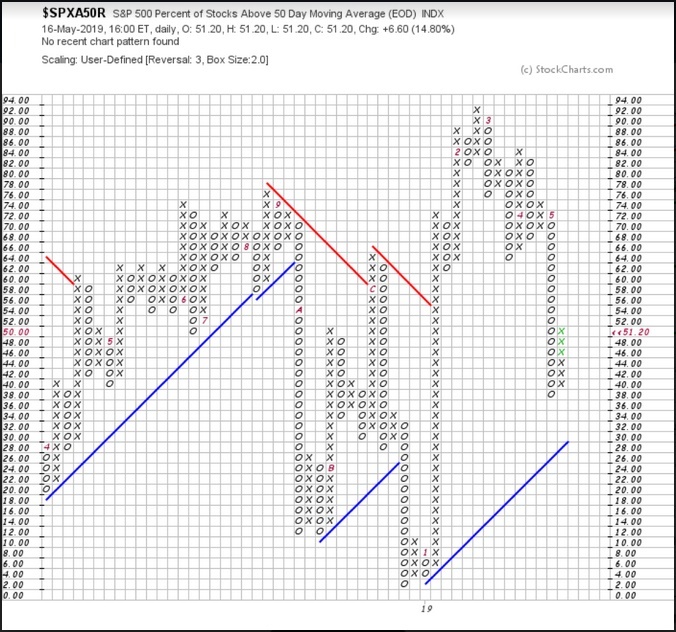 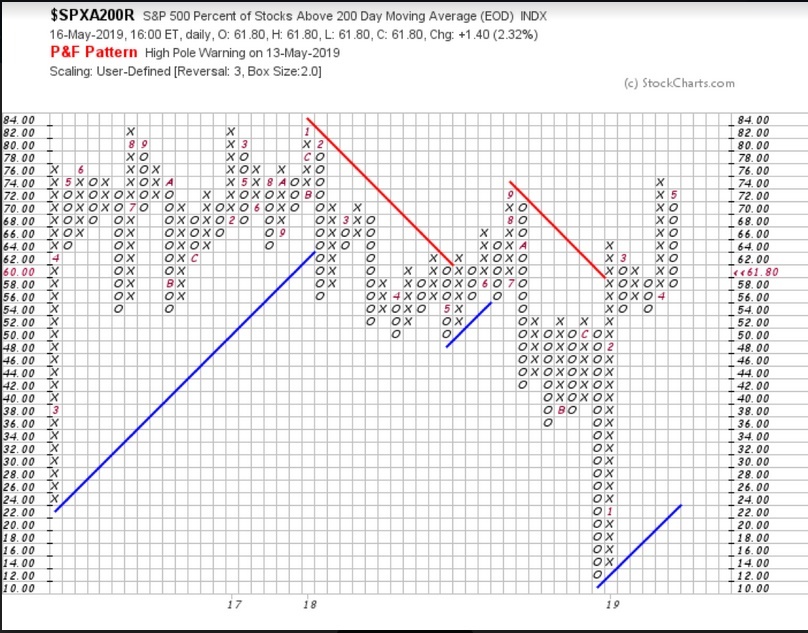 Bullish Percent Index: The percentage of stocks in the S&P 500 that are on point and figure buy signals has declined from over 78% to below 60% since the end of April. The chart is also in a column of O’s.  This measure of internal strength would turn bullish on a reversal back above 66%. Until then, this indicator is suggesting caution. 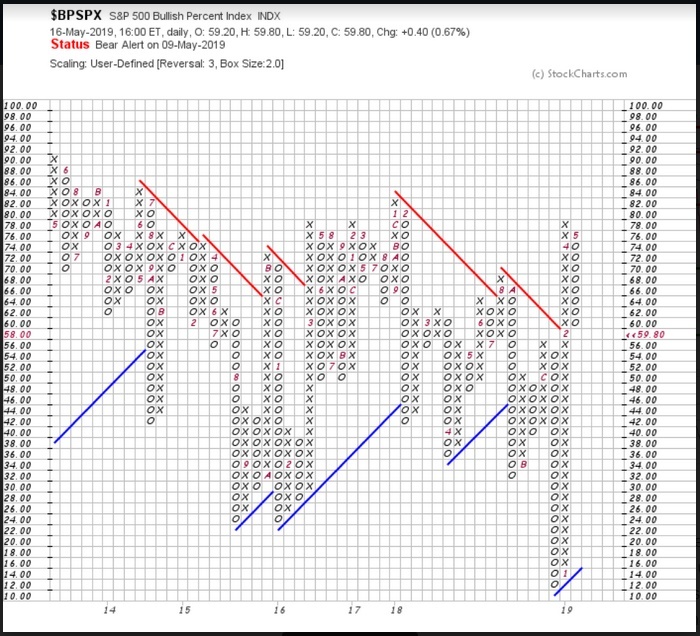 China isn't interested in continuing trade talks without evidence the U.S. is sincere, according to state media. Beijing is studying the impact of the tariffs and said stimulus will be stepped up to buttress the domestic economy. "If anyone thinks the Chinese side is just bluffing, that will be the most significant misjudgment" since the Korean War, the Taoran Notes blog, which was carried by state-run papers, said. Read on for the worst-case scenarios for China in the trade war. 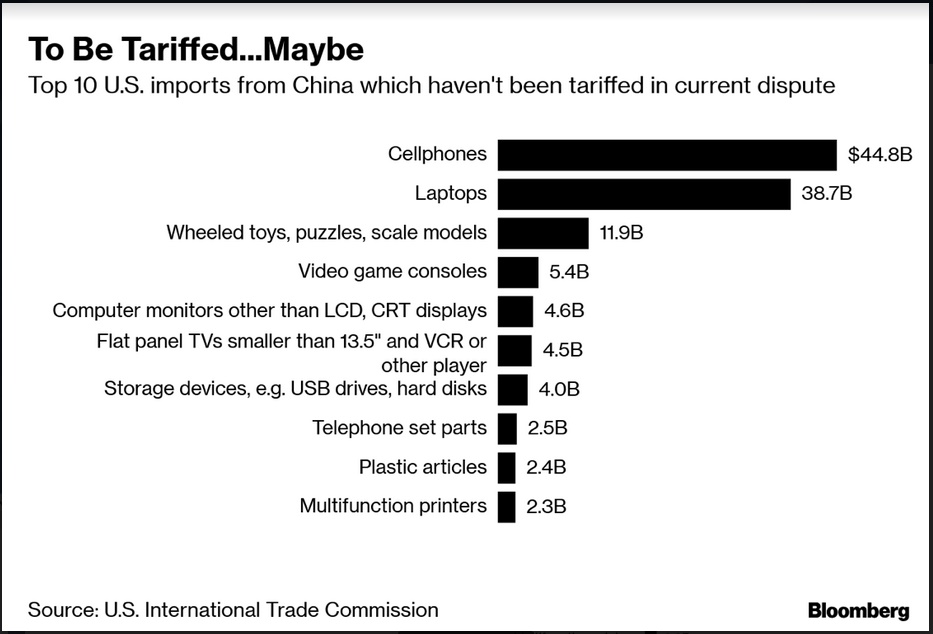 Deere cut its forecasts for the year on softening conditions in the agricultural sector. Second-quarter adjusted EPS missed while net sales beat. The company said ongoing concerns about export-market access, near-term demand for commodities such as soybeans, and a delayed planting season in much of North America caused farmers to become more cautious. At the same time, overall economic conditions remain positive.

In other earnings, Baidu's shares fell after its revenue view fell short and the company posted its first loss since listing in 2005. It's facing multiple headwinds on top of macro weakness, Citi said. Nvidia beat, but the shares pared some post-market gains after it said the server market outlook has worsened since the start of the quarter. Applied Materials' earnings also topped consensus, while Pinterest's forecast missed.

The confrontation between the White House and House Democrats escalated. Intelligence Committee head Adam Schiff railed at the DOJ for failing to hand over Mueller material and set a May 22 deadline, while Judiciary panel chief Jerrold Nadler accused President Trump of "unprecedented" defiance. Another bone of contention: Steven Mnuchin has until today to comply with a subpoena for Trump's tax returns.