At its July meeting, the ECB unveiled its fragmentation fighting apparatus: a set of tools aimed at preventing the excessive widening of sovereign spreads. We look at whether these tools can prevent them from blowing out further. We think they will, provided the ECB doesn’t hike aggressively and Italy doesn’t threaten to diverge from EU recommendations.

When asked about how it intends to tackle the widening of spreads, the European Central Bank continues to point to its first line defence, the flexible reinvestment of its pandemic emergency purchase programme (PEPP) holdings. Markets, however, doubt that it alone will be enough if investor confidence in peripheral government bonds is really put to the test.

The details on the instrument are scarce as the ECB appears to see some value in “constructive ambiguity”. Background reports have since suggested that the average monthly PEPP redemptions amount to €17bn, of which €12bn are in core countries. Other reports have said that the ECB has categorised countries into three groups: “donors”, “neutrals” and “receivers”. Redemptions coming from donor countries – Germany, France and the Netherlands were explicitly mentioned – could be used to support the markets of receivers, likely Italy, Spain, Portugal, and Greece.

At full speed, reinvestments could make up to 75% of recent peripheral bond purchases

In a month like July, PEPP would have more than €20bn at hand to spend on containing peripheral spreads

Even as the ECB has touted a high level of flexibility, the background reporting has told us that this falls short of allowing frontloading. The tool’s firepower would only become available on actual redemptions. We have estimated the PEPP’s redemption profile of donor/core country sovereign bonds and bills. In a month like July, it suggests that the PEPP would have more than €20bn at hand to spend on containing peripheral spreads, assuming a full redirection of redemptions is allowed. But then there are also stretches of several months – November this year through February 2023 where less than €10bn may be available. For comparison, when the pandemic hit in early 2020, we estimate that the ECB spent more than €20bn in each of the first four months on Italian sovereign bonds alone via public sector purchase programme (PSPP) and PEPP combined, keeping in mind that other measures also flanked the ECB’s buying support.

Note that on top of the above core redemption figures, the ECB could additionally support spreads by reaching further out the curve within its Italian portfolio. The PEPP portfolio contains Italian bills, which can provide additional near-term ammunition to manage spreads.

PEPP reinvestments are credible if they are used

Put into context, we estimated in an article published in July that, were they used to their full potential, reinvestment flow would be enough to roughly cover Italy’s and Spain’s general government deficit in 2H22 and 2023. However, under that best-case scenario, the peripheral bond purchases in the 12 months from July 2022 will only amount to 75% of the purchases in the 12 months, period, when PEPP purchases were already being tapered.

To conclude, PEPP reinvestment from core towards periphery bond markets could have a meaningful impact if used persistently and in full. As with any central bank endeavour, however, signalling is key. We are not convinced markets will attribute the high probability of this happening. Instead, we think they will think of intervention as a more ad hoc process occurring only when market conditions warrant it. This is understandable given that it would take the ECB’s bond portfolio further away from capital key distribution, but we think this is a price worth paying.

PEPP data are only reported on a bi-monthly basis, with the first batch relating to purchases in the months of June and July coming in early August, and the next one relating to purchases in August and September coming in early October. July purchases may give an early indication of how aggressive the ECB intends to be, but, since these will be lumped together with June, before the reinvestment policy started, it will be difficult to take a definitive signal from them.

TPI: There not to be used

It is clear from public comments from various ECB speakers that the Transmission Protection Instrument (TPI) is there not to be used. To recap, the ECB allows itself potentially unlimited sovereign purchases if unwarranted spread widening occurs, under heavy conditionality. The ECB may well conclude that these conditions are fulfilled for most sovereigns, including Italy, but some of the programme’s credibility hinges on how long the ECB can keep its support up if a government sets its country on a diverging course with the EU’s fiscal and reform recommendation.

This puts Italy squarely in the market’s crosshair. It is not within this article’s scope to put a probability on the long-term policy direction under a purported right-wing government but, the risk of divergence is something that markets are clearly pricing. This is visible when comparing how wide Italy’s spreads are relative to the level of core rates. For what it’s worth, we have sympathy with the view that it isn’t in the frontrunner’s interest to pick a fight with the EU on the campaign trail, as the election is theirs to lose, as it could undermine their positioning as a responsible governing party, and as it would cut both their access to significant EU funds, and cause a jump in borrowing costs.

Another potential limitation of the TPI’s firepower is the seemingly innocuous mention that the ECB will address its effect on the size of its bonds portfolio and on the amount of excess liquidity it creates. Our guess is that it should not prove a binding constraint for time and size-limited intervention but, should TPI activation result in material purchases, markets will rightly question whether the tool works at cross purposes with its overall objective of tightening policy. All this goes back to the long-term credibility of the tool and explains the ECB’s reluctance to use it.

The ECB’s secret weapon: Not hiking

Of course, one should remember that, first and foremost, the ECB has updated its fragmentation-fighting apparatus in order to deal with the unintended effects of policy tightening. After years of negative interest rates and asset purchases, changing policy direction was always going to cause some sovereign spreads to widen. Indeed, the increase in the cost of credit in excess of what is warranted by base rates is a key tenet of monetary tightening, in the eurozone and elsewhere. 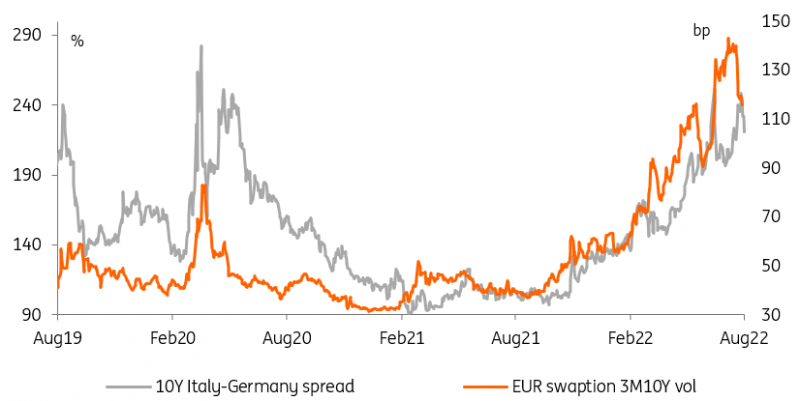 In that regard, markets converging to our long-held view that the ECB is only likely to hike rates modestly in this cycle, 100bp compared to the market discount of 300bp at some point in June, is helpful to peripheral bonds. If the relationship highlighted above between Bund yields and Italian spreads is anything to go by, spreads can be expected to continue tightening in the coming weeks. The same can be said if we’re right in expecting rates implied volatility to also return to more benign levels, although this may wait until liquidity conditions improve after the summer months.

Read the original analysis: Sovereign spreads: How big exactly is the ECB’s bazooka?