Silver prices, XAGUSD, are trading lower today, despite the increased likelihood that President-elect Biden will most likely control the US Senate and the house when he takes office later this month.

I don’t find the slide as a sign that silver prices have turned lower. Instead, I think it is a natural price correction to the gain we saw at the start of the year. Also, the silver price is higher by almost 25% from its December low.

Instead, I think a correction in silver prices serves as an opportunity for bullish traders to buy into the trend. As we will see below, there are bought fundamental and technical reasons for the silver price to trade higher.

First, any limitations or red tape introduced by the new president will most likely be countered with massive fiscal spending. Heading into the election, most analysts anticipated an injection of about 5% of US GDP. Also, President Biden is probably more pro-business than most people anticipate. So I don’t think any GDP contracting policies will be introduced in the first year. Instead, all the focus will be on getting the economy back on track. The US unemployment rate is at 6.7%, almost two times the unemployment rate before the COVID-19 crisis in January 2020.

With the former head of the US central bank, Janet Yellen, as the head of the US Treasury, it is likely that the US government will find many elaborated ways of supporting the economy.

Whilst, I don’t think we will see higher inflation anytime soon, there has been a clear link between monetary and fiscal stimulus, and gold and silver prices. Whenever there has been money printing, we have seen higher silver prices, as the Dollar softens, and as people buy silver as a hedge against inflation.

From a technical point of view, the outlook is also rosy. Silver was trading sideways between September 22 and December 22. Whilst, the pattern is not a perfect rectangle, we can still use the difference between the minimum and maximum price levels of the pattern, to derive a price target of $30.62. That is a potential return of 16.95% from the breakout point of $26.13. I think this pattern will remain in play as long as the price trades above the December 29 low of $25.83. Traders that are not interested in being too close to the price action will probably remain bullish above the December 22 low at 24.98.

What is your take on silver? Interact with Alex on twitter @AlexFX00. 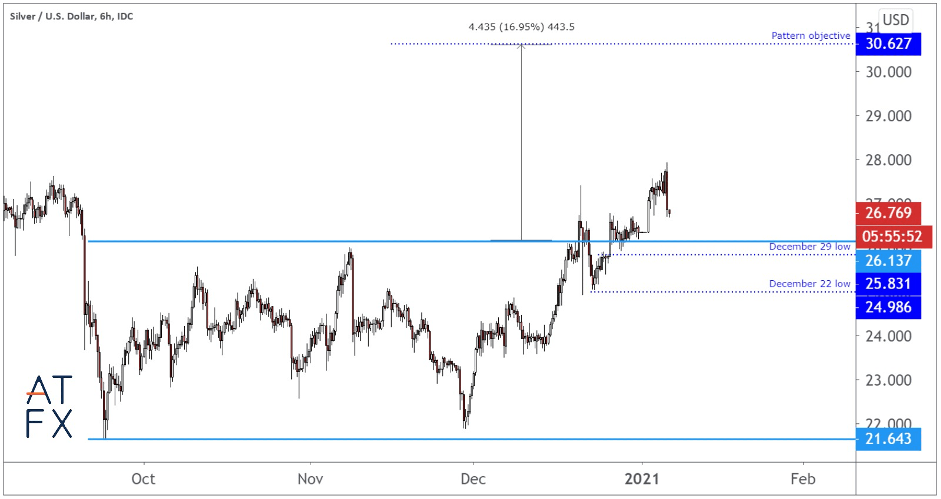