There are concerns in the US that “phase one” of a US/China trade agreement could be stalling. It is reported by sources close to the US negotiating team, that China have taken a very dim view of President Trump signing the Hong Kong bills into law. Traders made a move on Friday amidst low liquidity markets which has seen oil smash lower and pull gold higher. The coming days are now likely to be all about restoring any lost momentum of the talks, but also over how the two sides move on tariffs. Will the proposed 15th December tariff increases no longer be implemented? Can China persuade the US to roll back on previous tariffs? It would appear that unless the answer is yes, achieving “phase one” will be a real struggle. Market sentiment was hit on Friday, but over the weekend, some surprisingly positive China manufacturing PMI data has helped to boost risk appetite today. Both the official government data and the unofficial Caixin have the manufacturing sector in expansion in November. This covers a month during which confidence over “phase one” was growing. Subsequently, traders come into Monday looking at the glass half-full again. The key will be whether this data is reflected elsewhere, especially in the Eurozone and the US. Sterling remains mired in election uncertainty and continues to be the black sheep of the family.

Wall Street closed a shortened session weaker on Friday but coming back with a full complement today sees US futures ticking +0.2% higher. This more confident look to today’s trading has Asian markets positive, with the Nikkei +1.0% higher and Shanghai Composite +0.1%. European markets look a little muted but still positive today with the FTSE futures +0.1% and DAX futures +0.1%. In forex, there is a mixed to slightly risk positive look to markets. The China data seems to be benefitting NZD and AUD, whilst GBP is hit by election fluctuations. In commodities, the positive risk is unwinding some of Friday’s moves with gold and silver weaker, whilst oil is over +1% higher initially.

Chart of the Day – USD/CAD

The recovery of the US dollar against the Canadian Loonie in recent weeks has formed an uptrend, but spending the past week losing momentum runs the risk of turning corrective again. Throughout much of the past 12 months, USD/CAD has pivoted around 1.3300/1.3350, with trading over the past 5 months using this as a band of resistance. Throughout the past two weeks intraday rallies above 1.3300 have failed. This consolidation is now testing the support of a five week uptrend. Already we see the Stochastics turning lower, whilst the rise through the MACD lines is also threatening to top out (similar to the August rally failure perhaps?). A close below the uptrend (today at 1.3280) would suggest the bulls are running out of steam, whilst the support at 1.3250 is key near term (a breach of support on the hourly chart would complete a near term top) with a breach opening the next support at 1.3185. It looks to be that rallies into 1.3300/1.3350 are a struggle now. 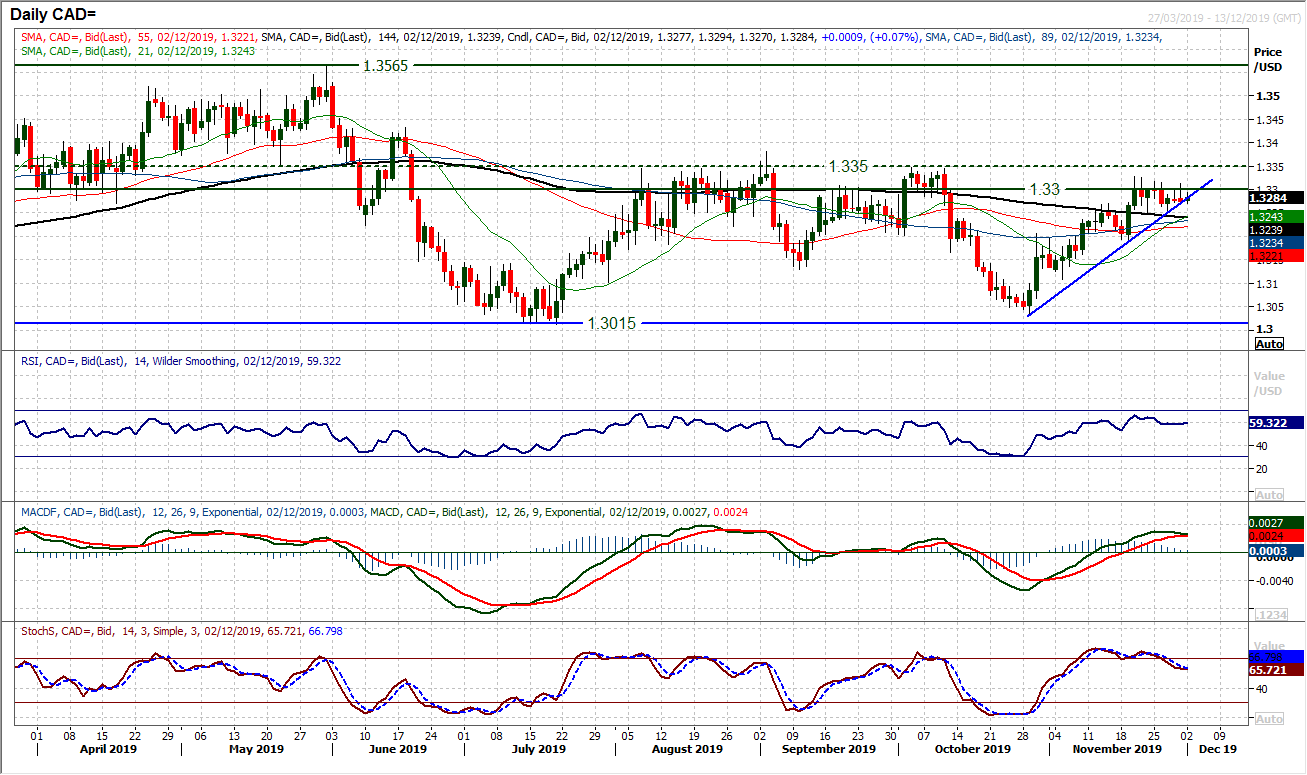 Our confidence in the positive outlook on WTI has been shaken once more, but is not yet broken. With Friday’s sharp negative session which saw the price fall by 4%, we have again seen a promising position scuppered. The key once more will be the bull reaction today, as previously there has been an almost instant positive reaction. For now we see the run of higher lows still intact, but this means that support at $54.75 is key. The momentum indicators are deteriorating now, but essentially this is still within a positive configuration. Depending upon news flow regarding the US/China dispute, we see that this may now turn into a choppy ranging outlook. The 50% Fibonacci retracement has often been a pivot in recent weeks (at $57.20) and could again act as a magnet. The longer the market trades below this the more of a negative bias that WTI takes on. 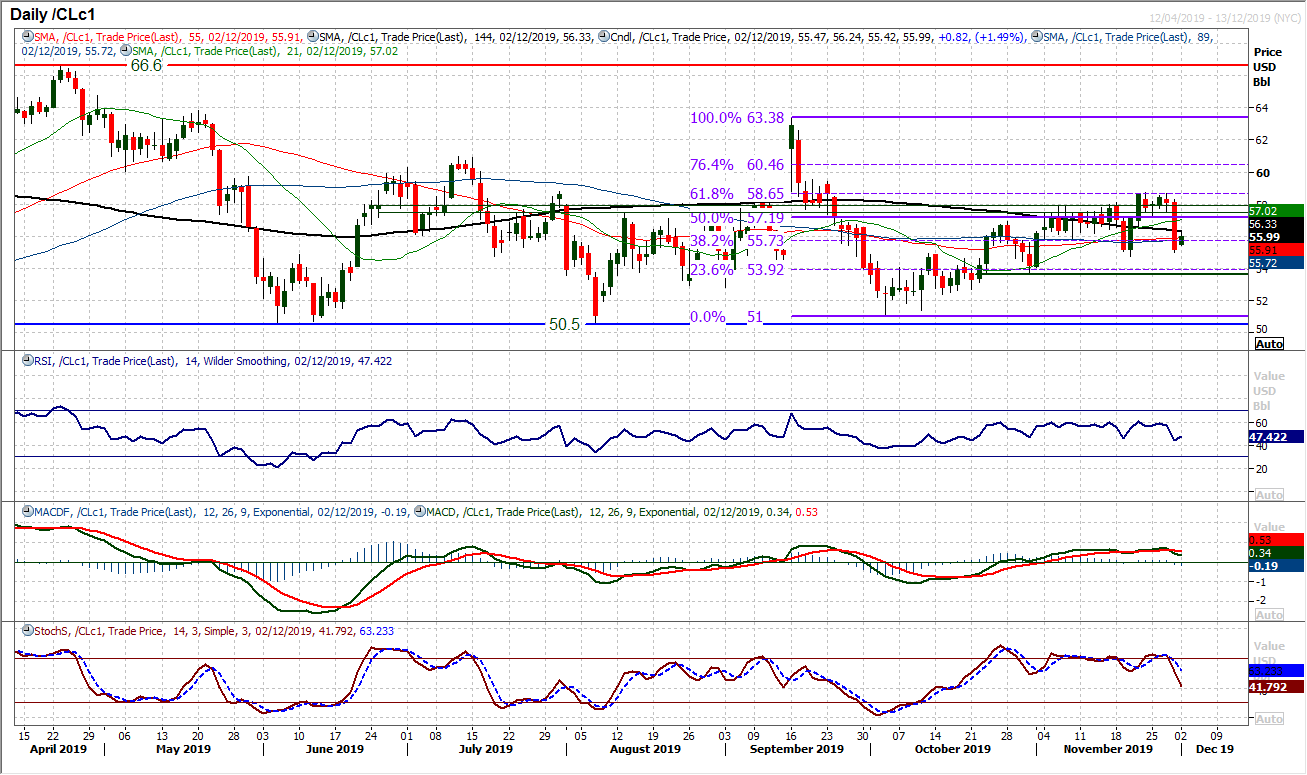 The immediate outlook for Wall Street is still set close to the progress of the US/China trade talks. Friday’s reaction lower on a slightly shorten session has again questioned the bull control, but with futures ticking back higher again today, this move looks to be ready to re-establish the bull control. On a technical basis, the uptrend of the past eight weeks is still supportive and comes in at 28,050 today. It looks to be that Friday’s move has helped to unwind the market and renew upside potential. Although daily indicators have rolled over, this is still well contained within a positive medium term outlook. It looks as though Friday’s low at 28,042 will take on a supportive role initially today as the bulls eye up Thursday’s all-time high of 28,175 again. 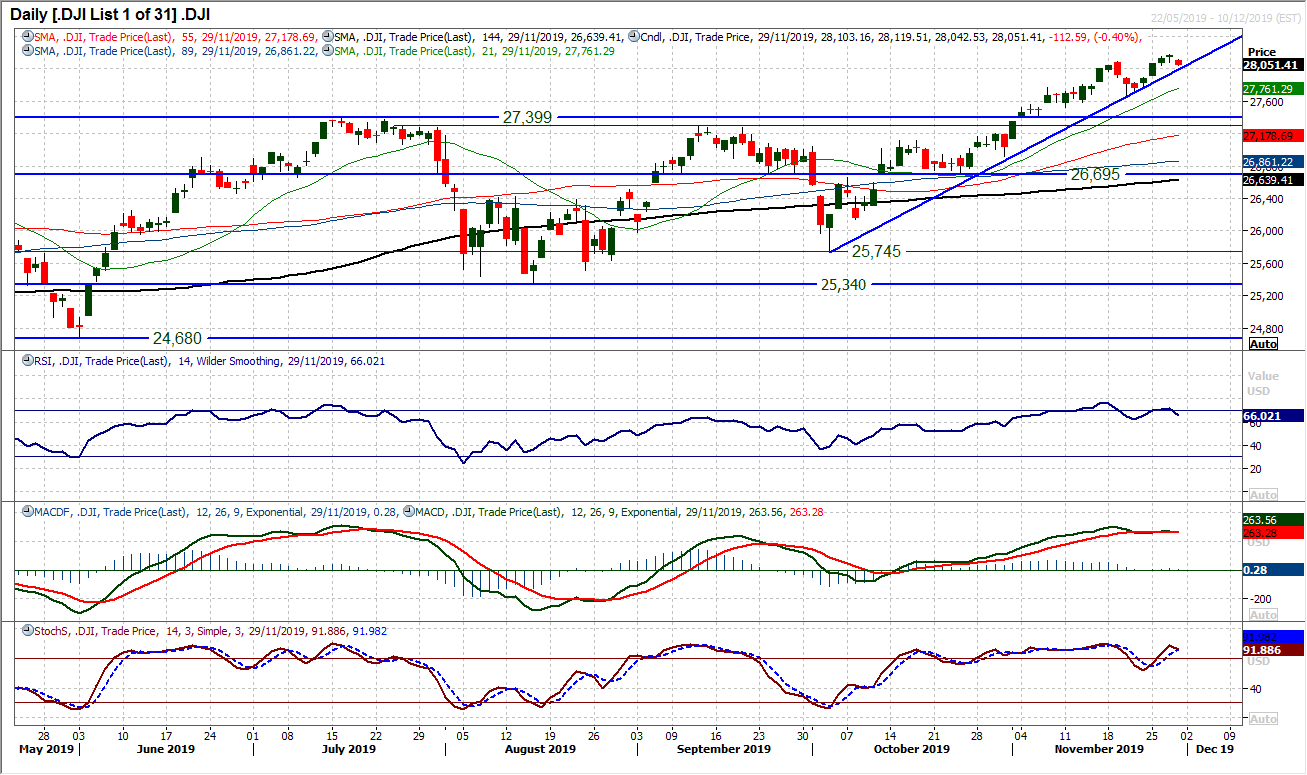