Intermediate trend:  2930 was exceeded by 20 points.  Rally top?  We need a congestion pattern to establish next count.

Last week, SPX reached a little beyond its projected target of 2930 and reversed sharply, closing near its low of the week.  IWM rallied as well, tried to close an open gap but failed; it also closed near the low of the week.  Next week’s action could be significant because more selling pressure is expected from a bottoming short-term cycle as well as from negative economic reports. 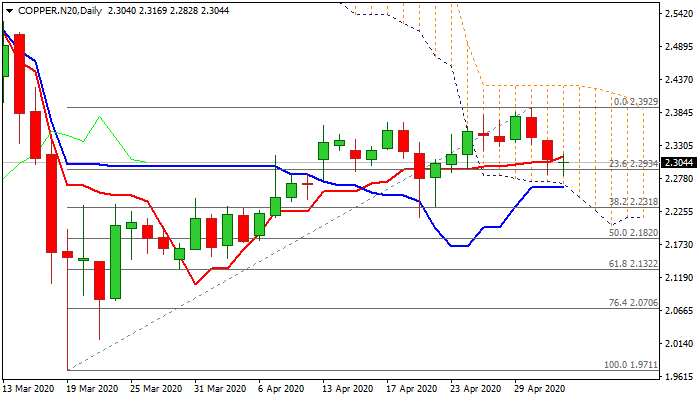 SPX surpassed its 2930 projection by 20 points before reversing and plunging 134 points in the next two days. The index closed near its low on Friday, suggesting that the decline is probably not over, especially since the cycle low is ideally due in the middle of next week.

This reversal most likely puts an end to the 763-point bear market rally from mid-March and signals the start of the next phase of the downtrend which started from 3393. It is possible that after additional selling into next week, we could rally into about mid-May before the next reversal.

So far, the decline in prices has only created a strong sell signal in the hourly indicators. But of the daily indicators, only the SRSI has turned negative while the A-Ds are close to doing the same. If there is enough additional weakness CCI will join the other two under the zero line and we will have a confirmed intermediate sell signal. 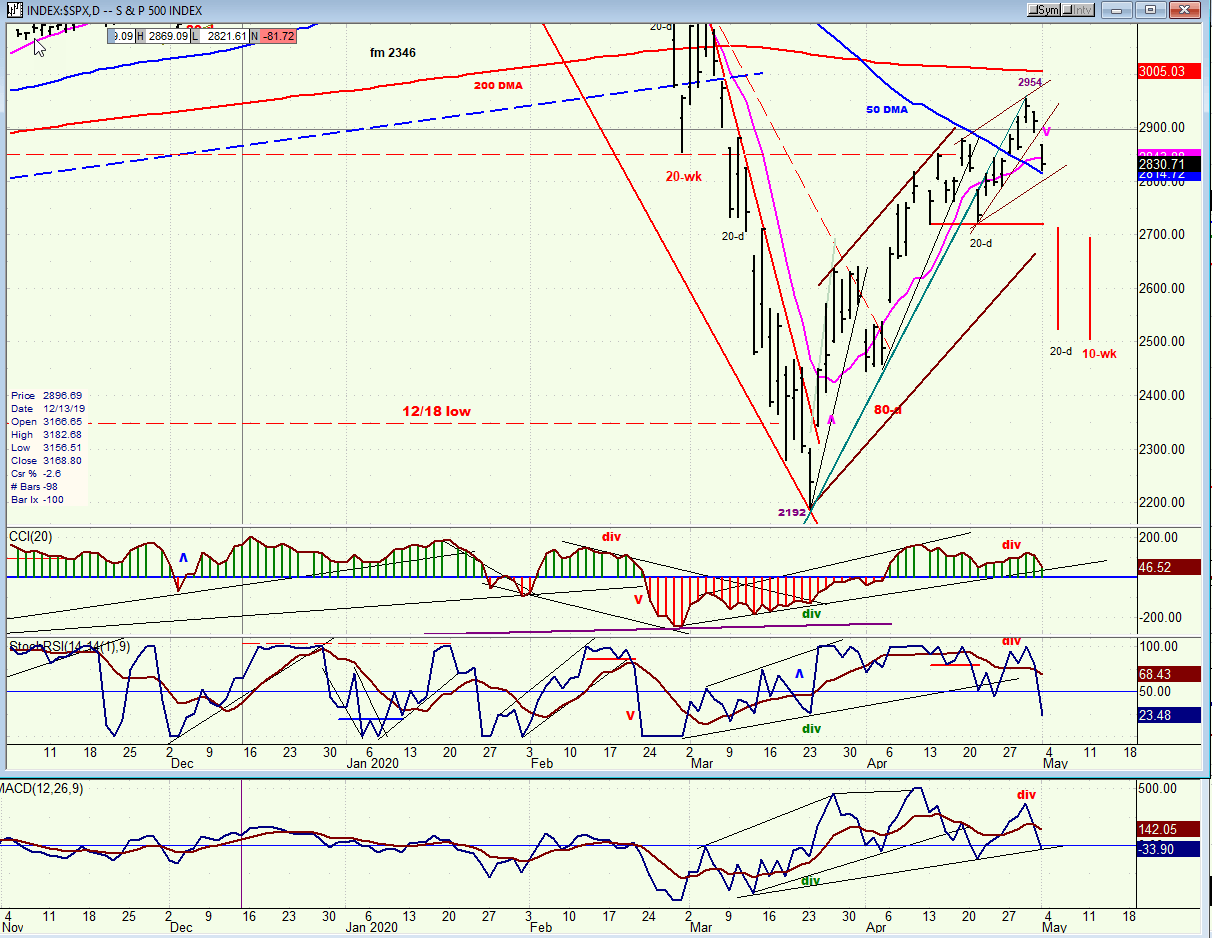 The decline from 2955 occurred without any significant bounce going into Friday’s close. I have marked on the chart the ideal time frame when the minor cycle should make its low, but a reversal could be short-lived.

Note that the decline took the index below the 50-hr MA in one fell swoop, thus creating a strong sell signal in all three oscillators. A return to bullishness would require that the oscillators move back to positive, usually with at least a trace of positive divergence making its appearance first. Since there is none, another two or three days down into the cycle low (and probably beyond) can reasonably be expected. 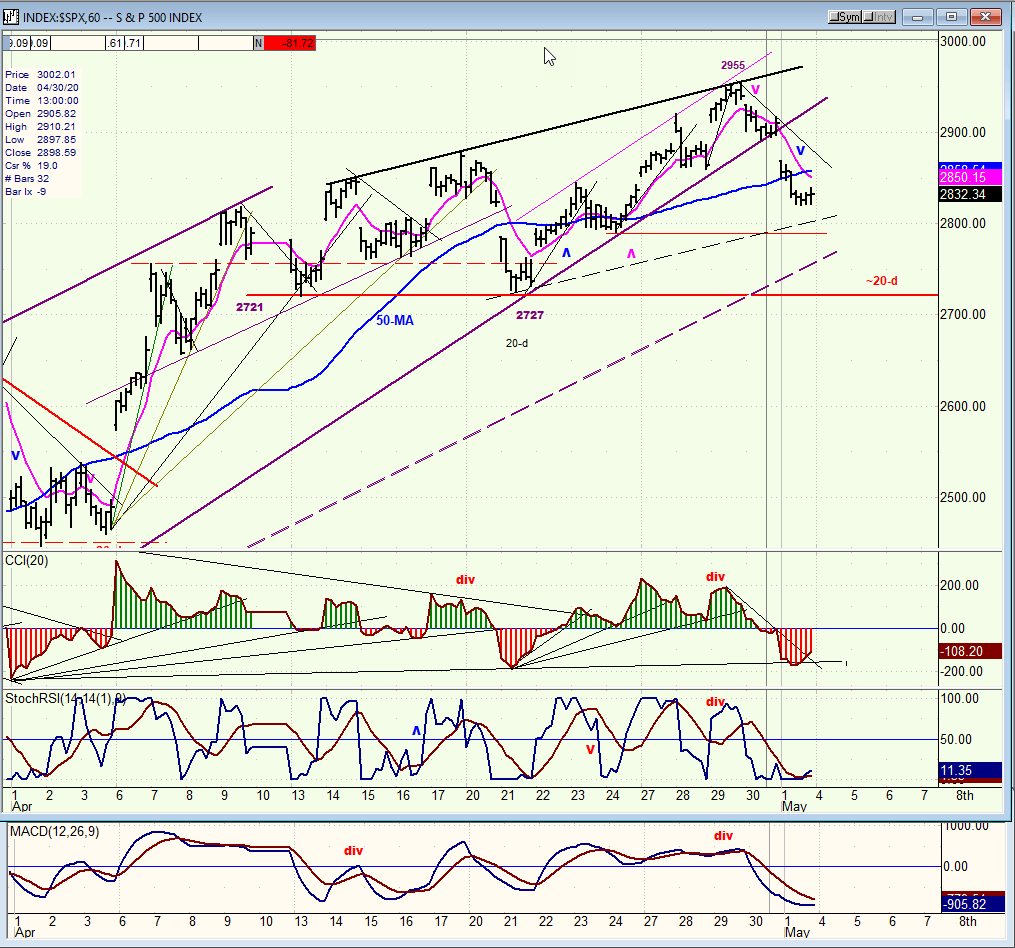 UUP has established a trading range above its 200-dma. Friday’s decline has taken it back down to it once again, and UUP must hold at this level or risk rolling over into the next 3-m low which does not come until the end of June. 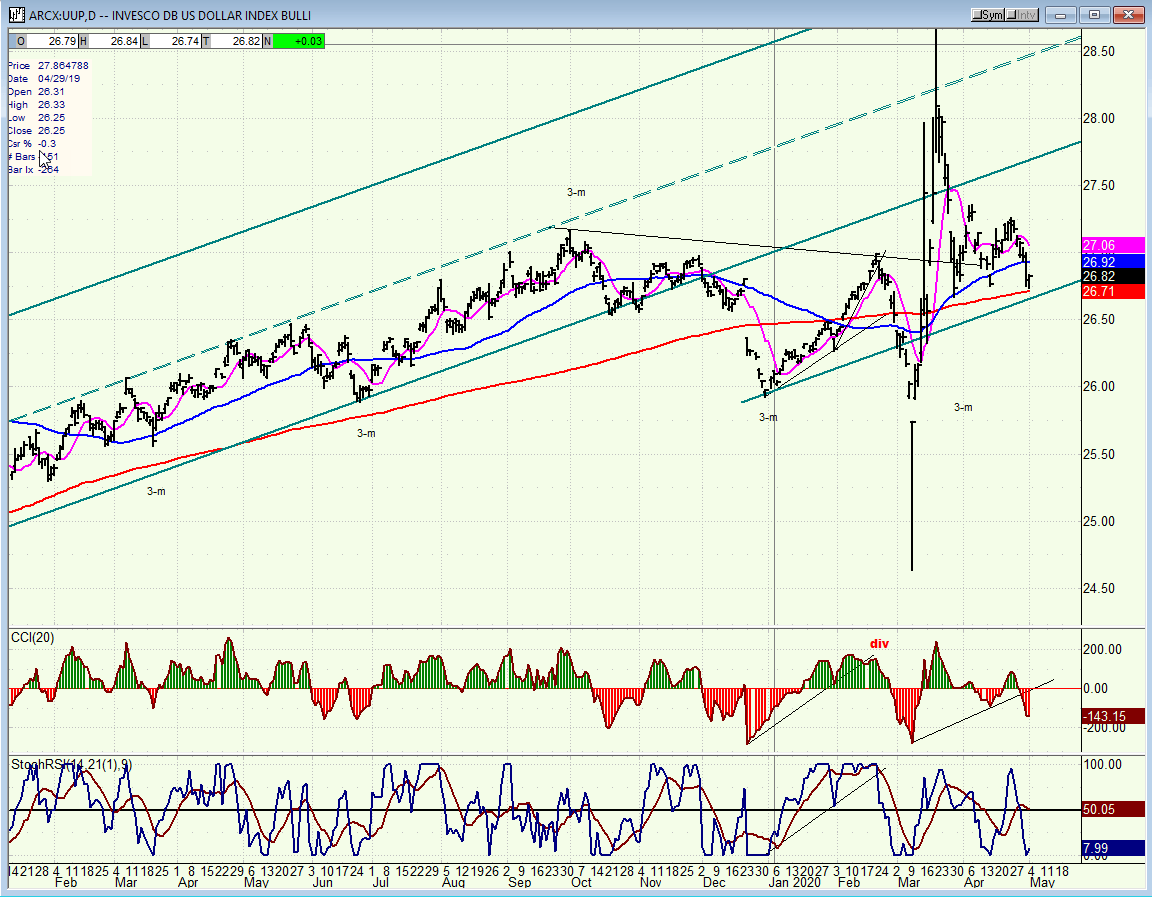 GDX needs to continue to rebound above 34, or risk correcting down to 28.50. 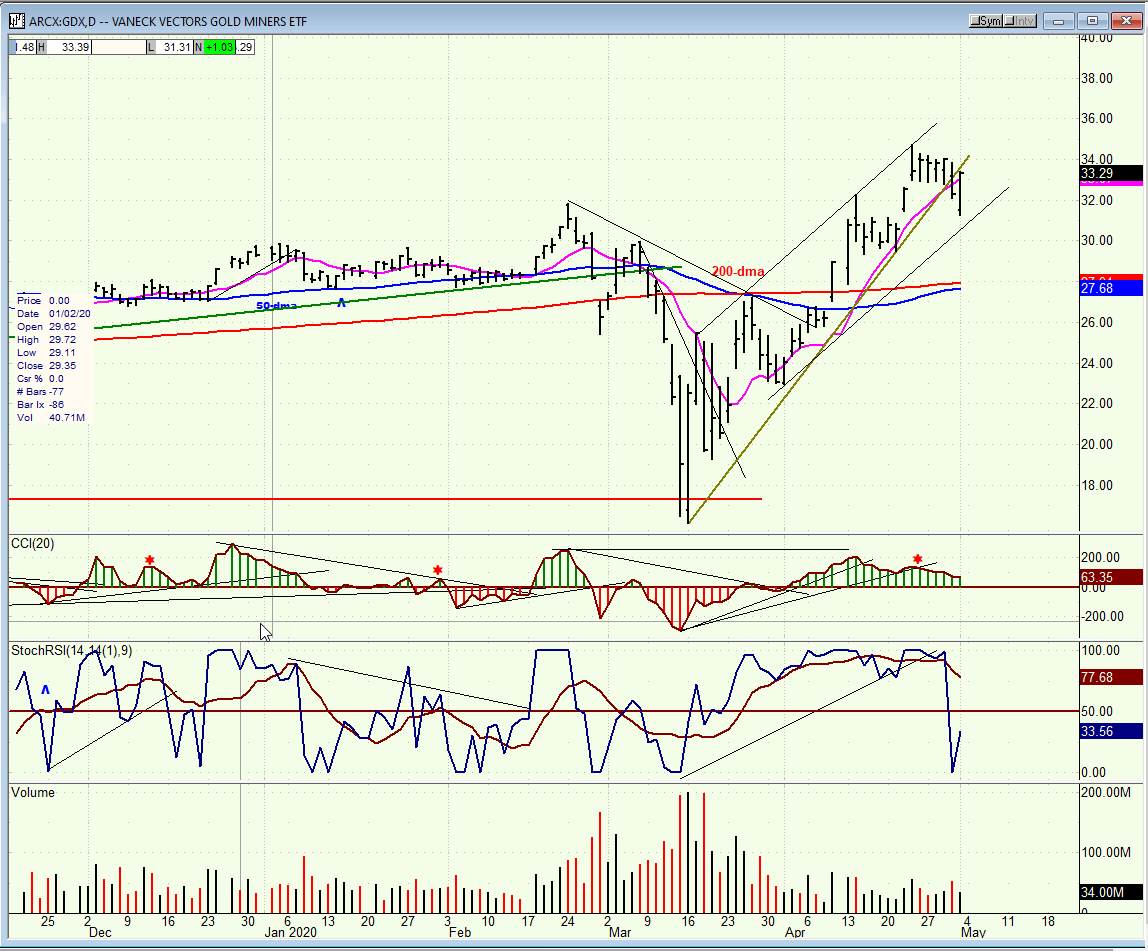 PAAS continues to model its trading after GDX. It’s in the same fix! 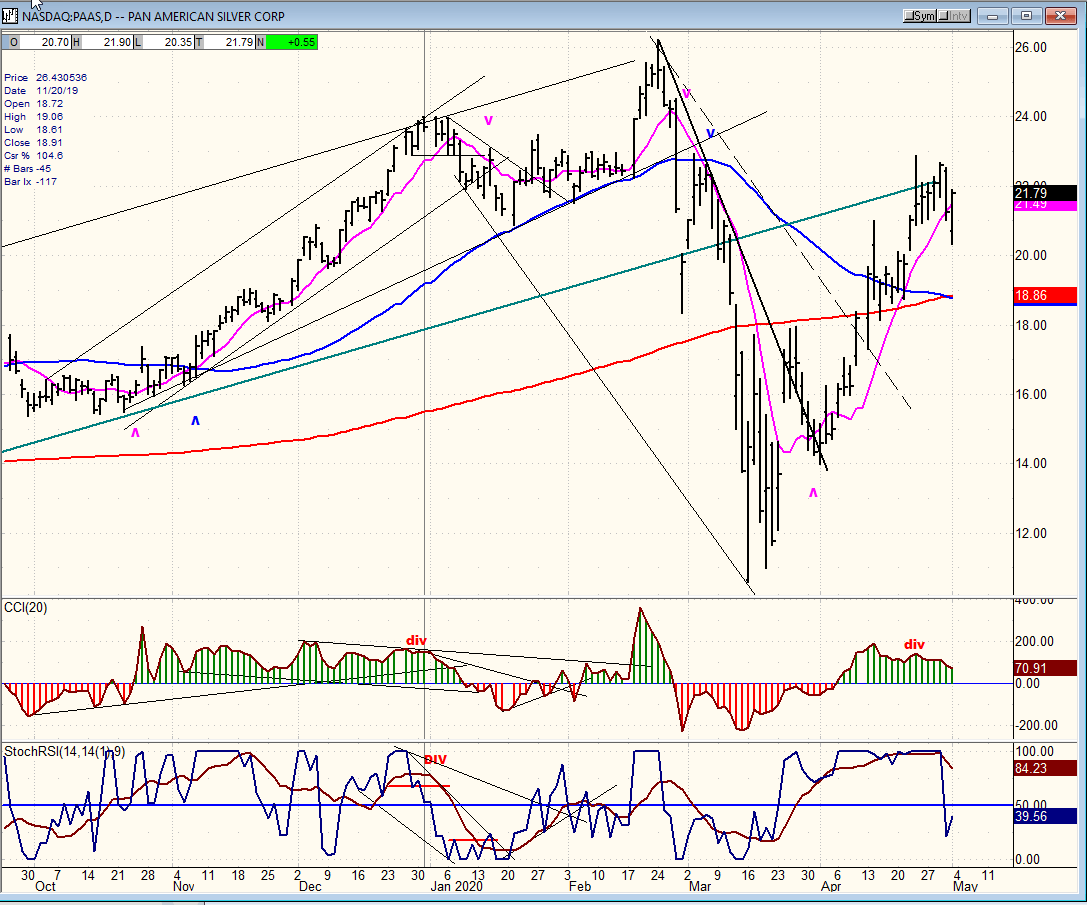 BNO may be starting a base between 6 and 8. 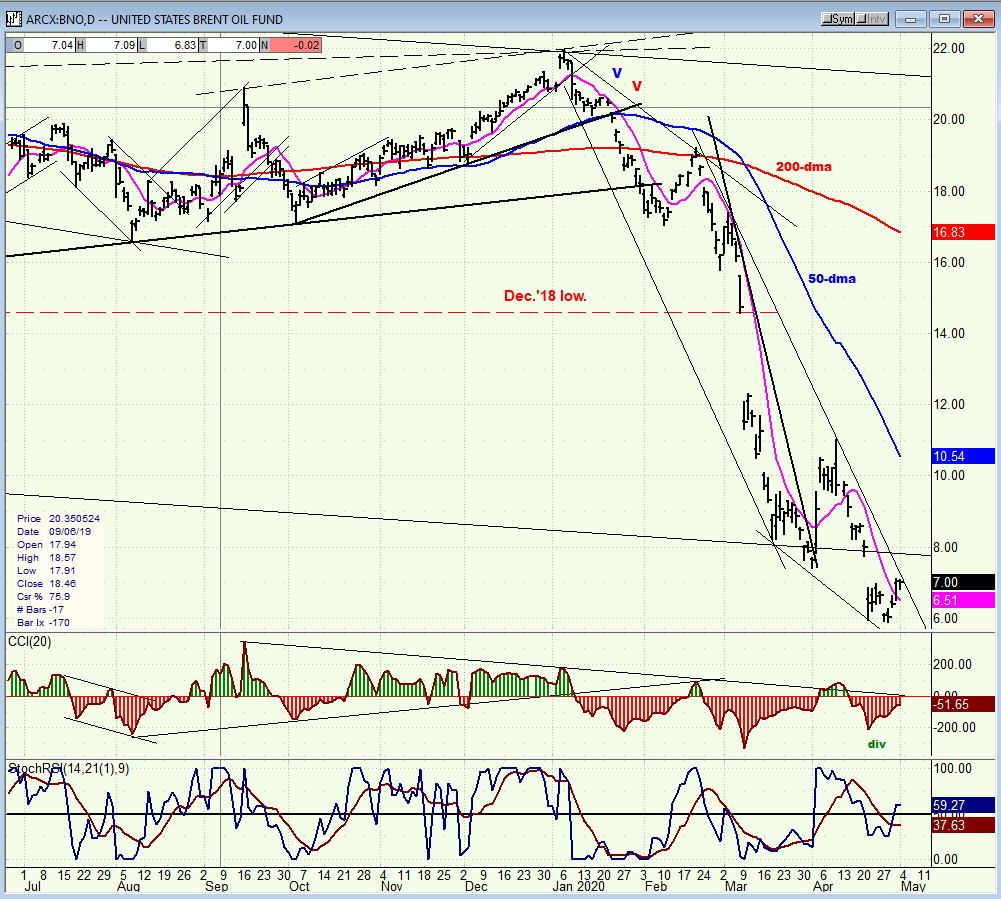 The ISM non-manufacturing PMI is due on Tuesday morning, and this could be a good time for a near-term cycle low. However, a rebound could be short-lived, since next Friday investors will have to face some extremely poor job numbers.