The Reserve Bank of Australia will announce its monetary policy decision on Tuesday, August 3. The central bank is expected to maintain the cash rate steady at 0.1% and the three-year target of 0.1% on government bonds. In its previous meeting, the RBA decided to reduce the pace of bond purchases starting September from A$ 5 billion per week to A$ 4 billion. Given the latest developments, market participants are expecting the RBA to revert such a decision.

Australia is battling against the pandemic. The country has extended its current local lockdowns, which started in June. That makes almost three months of reduced economic activity, and macroeconomic figures are reflecting so. At this point, speculative interest has pushed back a possible rate hike to early 2023.

One thing may require particular attention: inflation was much higher than anticipated, as the annual inflation rate jumped to 3.8% in the second quarter of the year, from 1.1% for the twelve months to March. Governor Philip Lowe & Co will likely attribute it to temporary factors.

The other main point is employment. The unemployment rate contracted to 4.9% in June, which somehow suggest that the country is getting closer to full employment. However, policymakers are focused on wages, which ticked higher in the first half of the year, but remain subdued. The annual growth rate is 1.5%. The RBA has noted that a rate hike will depend on the unemployment rate falling sufficiently to start pushing up wages.

Overall, market players are anticipating a dovish stance that should put the AUD under selling pressure. The AUD/USD pair is depressed, trading below the 0.7400 level. In July, the pair set a yearly low at 0.7288.

From a technical point of view, the AUD/USD pair is bearish. In the daily chart, the pair is developing below a bearish 20 SMA, which extends its decline below the longer ones, providing dynamic resistance at around 0.7405. Technical indicators aim higher but within negative levels, reflecting the current advance instead of suggesting further gains ahead.

An upbeat tone could push the pair above 0.7400, mainly if the broad dollar’s weakness persists. The next relevant resistance comes at 0.7440, and it seems unlikely that the pair could break beyond this last. 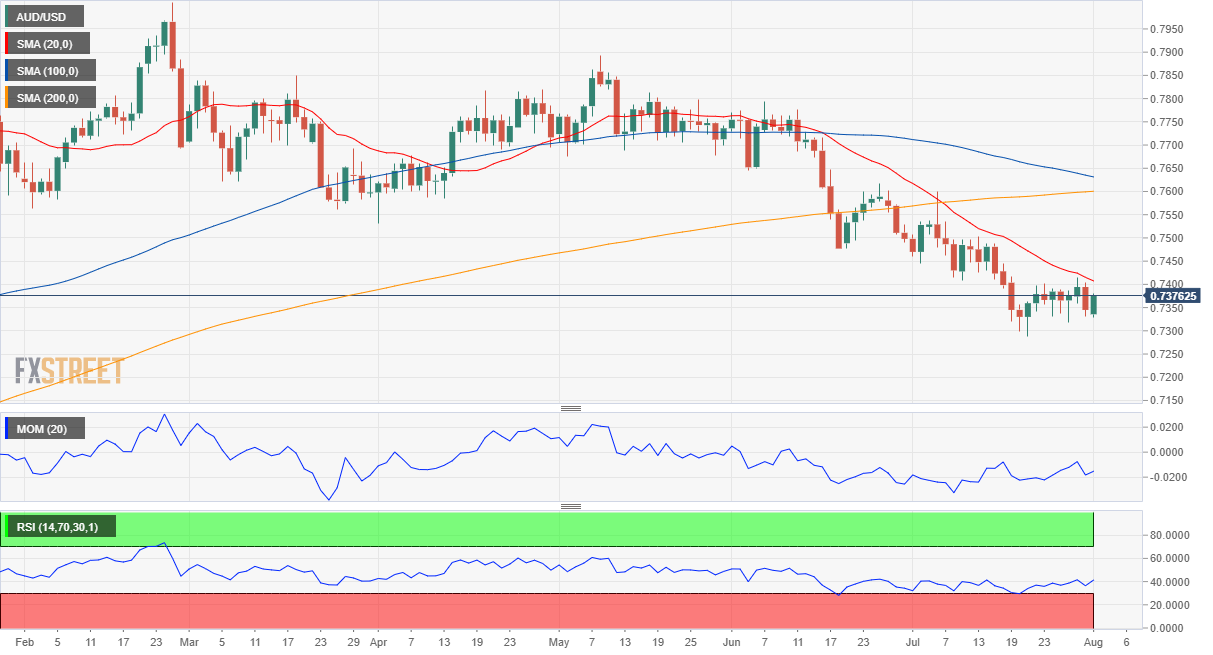