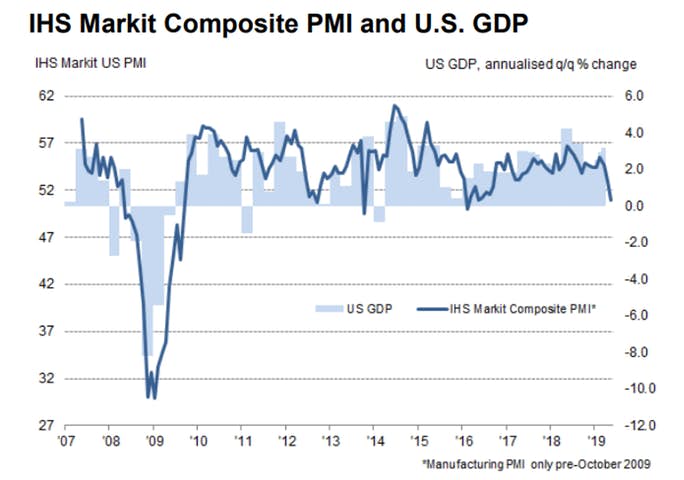 “Growth of business activity slowed sharply in May as trade war worries and increased uncertainty dealt a further blow to order book growth and business confidence.”

“A decline in the headline ‘flash’ PMI to its lowest for three years pushes the survey data down to a level historically consistent with GDP growing at an annualized rate of just 1.2% in May. Worse may be to come, as inflows of new business showed the smallest rise seen this side of the global financial crisis. Business confidence has meanwhile slumped to its lowest since at least 2012, causing firms to tighten their belts, notably in respect to hiring. Jobs growth in May was the weakest seen for over two years. ”

“The slowdown has been led by manufacturing, but shows increasing signs of spreading to services. The survey data have been consistent with falling manufacturing output since February, but suggest that the sector’s woes intensified in May to mean factories will therefore likely act as an increasing drag on the economy in the second quarter. Trade wars remained top of the list of concerns among manufacturers, alongside signs of slower sales and weaker economic growth both at home and in key export markets. ”

“However, an additional concern is the spreading of the malaise to the service sector, growth of which slumped in May to one of the weakest since the global financial crisis. With the service sector’s performance being a key gauge of the health of domestic demand, this broadening-out of the slowdown poses downside risks to the outlook.”

EUR/USD is trading above 1.1250, the highest since mid-March. The ECB added €600 billion in fresh stimulus, more than expected. The bank's move joins German stimulus and hopes for a recovery.