After completing an interesting bullish reversal pattern, NZD buyers are challenged with a firm resistance area around 7-week highs.

As we can see on the daily chart below, the Kiwi has been trading in a beautiful descending channel since February 2021. Following the latest rally, the NZD/USD now appears to have confirmed a bullish breakout and is likely to continue its recovery from 2021 low, around 0.6700, which is located at the lower edge of its descending channel.

Having broken above the previous top of 0.6855 indicates completion of the failure swing pattern that is supposed to encourage more buyers to rein the market.

Although, they need to overcome the firm resistance of 0.6886 before progressing higher. Following the breach of this hurdle, an accelerating upside bias can move the price towards the 0.6928-level.

If buyers become able to generate enough positive momentum, we can then look for a surge into the 200-day exponential moving average that is clustered between the 0.6955 and 0.6982 handles.

A sustained move over the 200-day EMA will indicate that bullish momentum is ramping up, with buyers targeting 0.7042 before reaching the upper band of the channel.

The RSI and the momentum oscillators imply that bullish sentiment is in the ascendant at the moment. The RSI just climbed out of the neutral zone above 55, and the momentum is pointing upward after crossing over the 100-threshold. At the same time, the MACD reflects that selling pressure is fading with the MACD bar shrinking in the negative territory above the signal line. 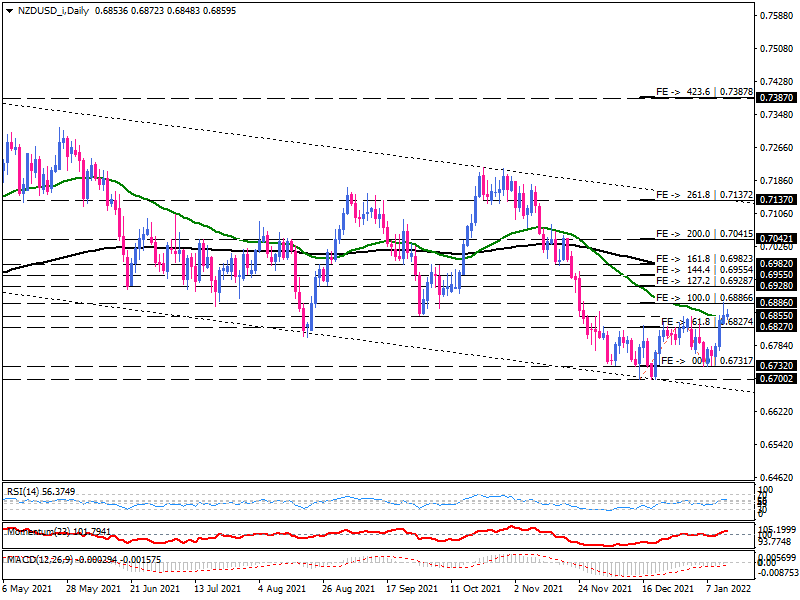 In the bearish scenario, if sellers regain control, the price will find initial support at the 0.6827-barrier that lies on the 61.8% Fibonacci extension level.

A successful breakthrough of this hurdle can send the pair to the swing bottom of 0.6732, which is expected to serve as support.

Trading forex and other financial instruments involve a high level of risk and may not be suitable for all investors or traders. Traders must carefully consider their trading objectives, financial situation, risk appetite, and level of experience before stepping into margin trading with Inveslo. There's a risk of losing more than the trader’s initial investment. The higher the leverage, the more the risk, which can go or against you. Traders are advised to be aware of the associated risks.