New Zealand’s (NZ) economy is expected to see a revival in the economic recovery or a missed technical recession in the first quarter of 2021 after witnessing a contraction in the final quarter of the last year.

Even though the impact of the pandemic overseas continues to threaten the economic growth outlook, a closer look reveals that the surge in commodities prices, the country’s rampant housing market and capacity constraints emerge as the factors affecting the economy’s performance.

The South Pacific nation’s GDP rate is expected to rebound by 0.5% QoQ in the three months to March vs. a 1% contraction seen in the fourth quarter of 2020. On an annualized basis, the economy is seen growing by 0.9% in Q1 vs. a -0.9% recorded in the previous quarter.

Despite New Zealand’s relative success in combating the coronavirus crisis, the economy is not out of the woods yet, with the recovery quite uneven and uncertain.

Further, the New Zealand Institute of Economic Research (NZIER) revealed that beyond the weaker starting point for GDP growth, the near-term growth outlook has been revised up.

Christina Leung, Principal Economist at NZIER, predicts a 1% expansion, adding that “we realize that is at the higher end of the range of forecasts out there, but many of the indicators of activity in sectors such as construction, wholesale and retail trade are pretty strong for the March quarter.

However, there are significant factors undermining the turnaround such as a slowdown in international tourism due to the closed borders, capacity constraints and supply bottlenecks.

“Biting capacity constraints (such as difficulty finding labor, global shipping delays and supply bottlenecks) have arguably become a larger constraint on activity than the demand and income shock, according to the ANZ economists.

In light of the mixed outlook, the RBNZ has predicted a 0.6% drop in GDP for the quarter. Therefore, a downside surprise to the GDP may have little to no impact on the central bank’s monetary policy outlook.

NZD/USD is bouncing off two-month lows on 0.7100 in the runup to the US Federal Reserve (Fed) showdown. The pullback can be seen as closing out of short positions ahead of the all-important FOMC monetary policy decision and the NZ Q1 GDP release, both slated for release on Wednesday.

If the Fed turns out to be explicitly hawkish, as widely expected, it could dent the overall market sentiment while lifting the US dollar’s demand. In such a case, the influence of the NZ GDP report on the kiwi could likely be limited, as the persisting risk trend and dollar’s moves could be the main market motors.

Only a big beat on the NZ GDP figures could help reverse the recent downtrend in the kiwi, with a test of the powerful resistance around 0.7190 inevitable. However, or a terrible report alongside likely hawkish hints from the Fed could knock off the rates back towards 0.7100 and 0.7045 support area. 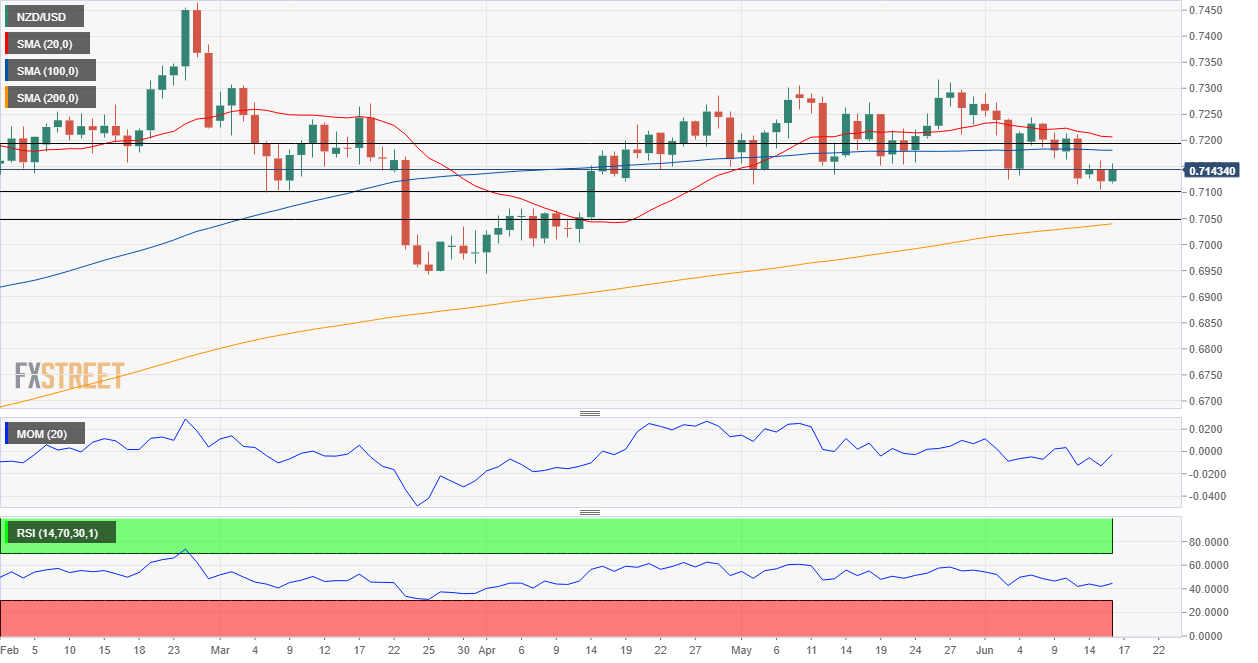