Global stocks declined sharply as investors started worrying about growth. In the United States, the Dow Jones, S&P 500, and Nasdaq 100 indices declined by more than 0.70%. Similarly, in Europe, the DAX and FTSE 100 indices declined by more than 1%. The decline contrasted with what happened in the bond market as the benchmark 10-year yield declined to 1.276%. This yield, which influences companies and consumer borrowing costs, declined to the lowest level since February. This price action came after the latest FOMC minutes that warned about uncertainty around the economic outlook. Also, in China, the government said that it would use timely cuts in banks’ reserve ratios.

The euro rose after the European Central Bank unveiled its first strategy change in more than two decades. The bank set a new 2% inflation target and hinted that it will tolerate moves above that level. The previous target was “close to, but below, 2%.” As a result, this was interpreted to mean that the bank will leave interest rates low for longer. The bank also unveiled new plans to deal with climate change. It will achieve that by tilting its asset purchases to low-carbon industries. The euro will react to a speech by Christine Lagarde, the European Central Bank president.

The EURUSD pair rose to 1.1836 after the latest ECB strategy release. On the four-hour chart, the pair has formed a descending channel. It is currently below the upper side of this channel. It is also slightly below the 25-day moving average while the signal and histogram of the MACD are below the neutral line. The DeMarker indicator has also moved from the oversold level of 0.033 to 0.64. Therefore, the pair will likely resume the downward trend as bears target the lower side of the channel at 1.1775. 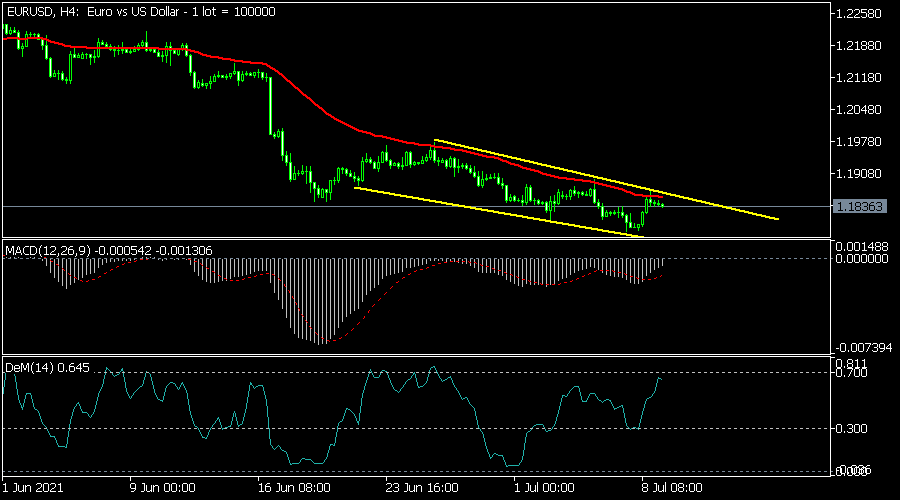 The AUDUSD pair declined to 0.7400, which was the lowest level since April. As it dropped, it moved below the important support level at 0.7440. It also declined below the 25-day and 15-day moving averages and is along the lower side of the Bollinger Bands. Oscillators like the Relative Strength Index (RSI) and MACD have also declined. Therefore, the pair will likely keep falling as bears target the next key support at 0.7350.

The Nasdaq 100 declined by more than 100 points on Thursday as the global sell-off accelerated. The index declined to $14,550, which was below the all-time high of $14,900. It is still above the short and longer-term moving averages while the MACD and Relative Strength Index (RSI) have declined. Therefore, the index will likely keep falling today and rebound next week.