Democrats are not slowing down - the social spending bill follows the infrastructure package. Will gold benefit, or will it get into deep water?

Will the American spending spree ever end? On Monday last week (November 15, 2021), President Biden signed a $1 trillion infrastructure package, and just a few days later, Biden’s social spending bill worth another $1.75 trillion passed the US House of Representatives. Apparently, $1 trillion was not enough! Apparently, we don’t already have too much money chasing too few goods. No, the economy needs even more money!

Yes, I can almost hear the lament of American families: “we need more money, we already bought everything possible, we already own three cars and a lot of other useless crap, but we need more! Please, the almighty government, give us some bucks, let your funds revive our land”. Luckily, the gracious Uncle Sam listened to the prayers of its poor citizens.

Given the above, one could think that the US economy is not already heavily indebted. Well, it’s the exact opposite. As the chart below shows, the American public debt is more than $27 trillion and 125% of GDP, but who cares except for a few boring economists? 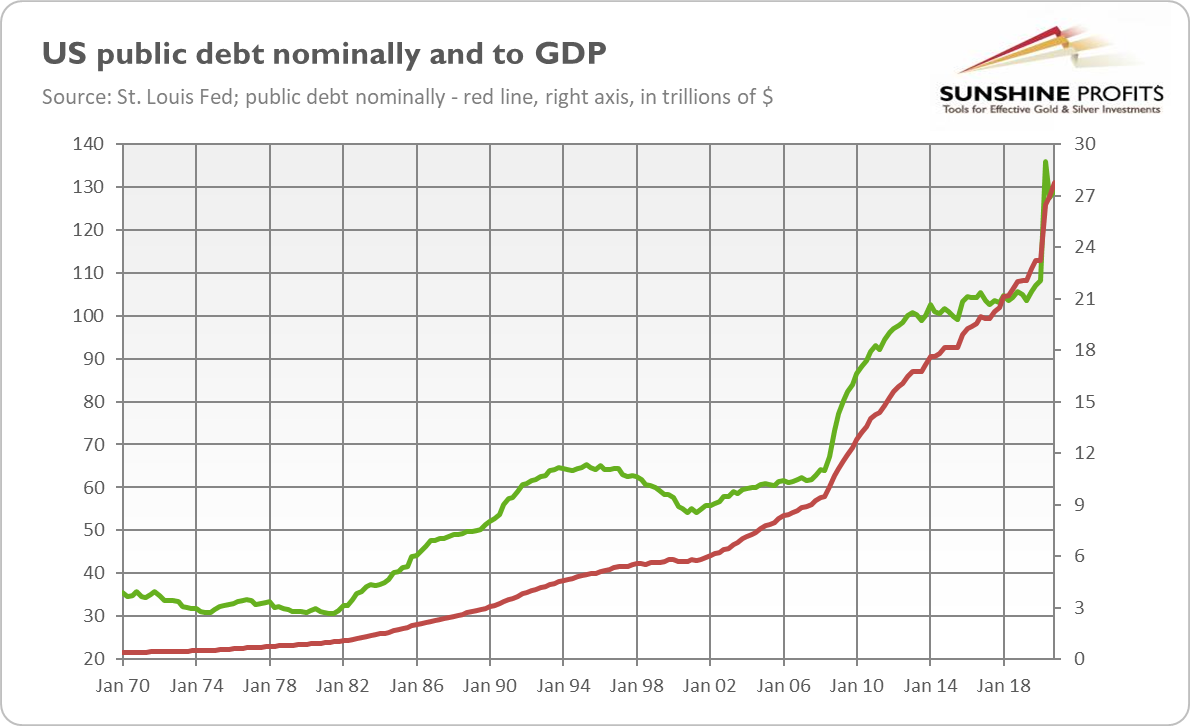 Of course, neither infrastructure nor spending bill will increase the fiscal deficits and overall indebtedness to a similar extent as the pandemic spending packages. These funds will be spread over years. Additionally, the fiscal deficit should narrow in FY 2022 as pandemic relief spending phases out (this is already happening, as the chart below shows), while the economic recovery combined with inflation tax bracket creep increases tax revenues. 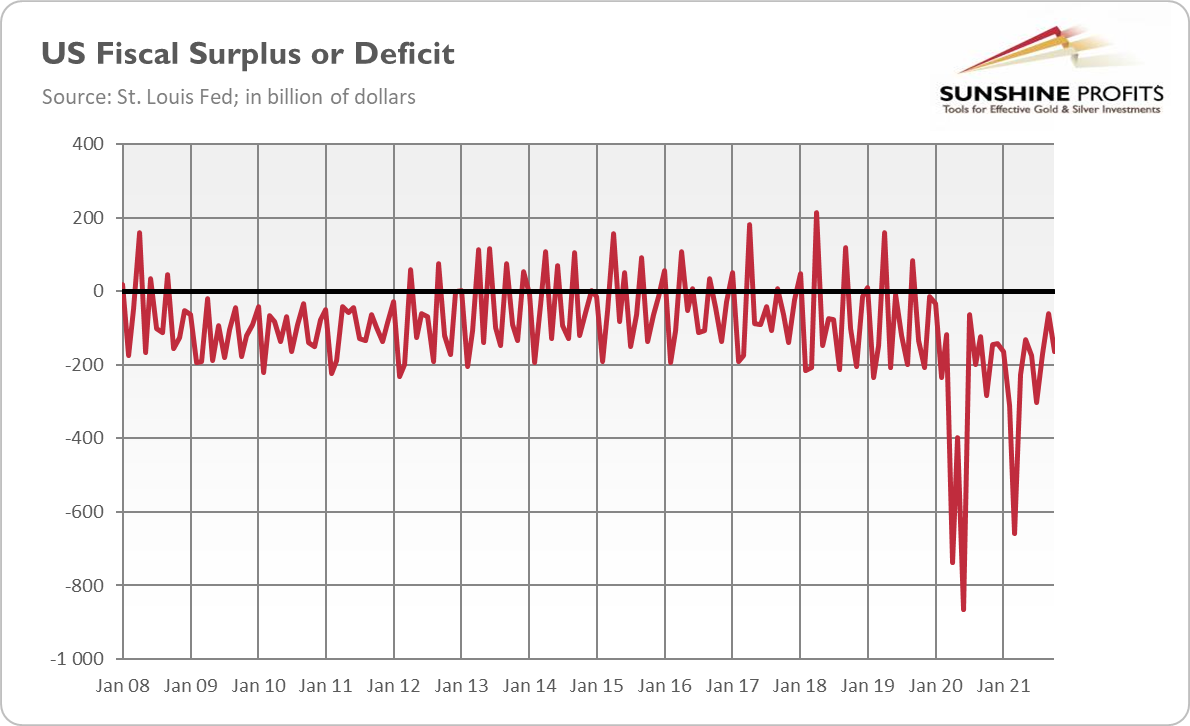 However, both of Biden’s bills will increase indebtedness, lowering the financial resilience of the US economy. What’s more, the overall debt is much larger than the public debt I focused on here. Other categories of debt are also rising. For instance, total household debt has jumped 6.2% in the third quarter of 2021 year-over-year, to a new record of $15.2 trillion.

What does the fiscal offensive imply for the precious metal market? In the short run, not much. Fiscal hawks like me will complain, but gold is a tough metal that does not cry. Both of Biden’s pieces of legislation have been widely accepted, so their impact has already been incorporated into prices. Actually, the actual bills could be even seen as conservative – compared to Biden’s initial radical proposals.

In the long run, fiscal exuberance should be supportive of gold prices. The ever-rising public debt should zombify the economy and erode the confidence in the US dollar, which could benefit the yellow metal. However, the empire collapses slowly, and there is still a long way before people cease to choose the greenback as their most beloved currency (there is simply no alternative!).

So, it seems that, in the foreseeable future, gold’s path will still be dependent mainly on inflation worries and expectations of the Fed’s action. Most recently, gold prices have stabilized somewhat after the recent rally, as the chart below shows. 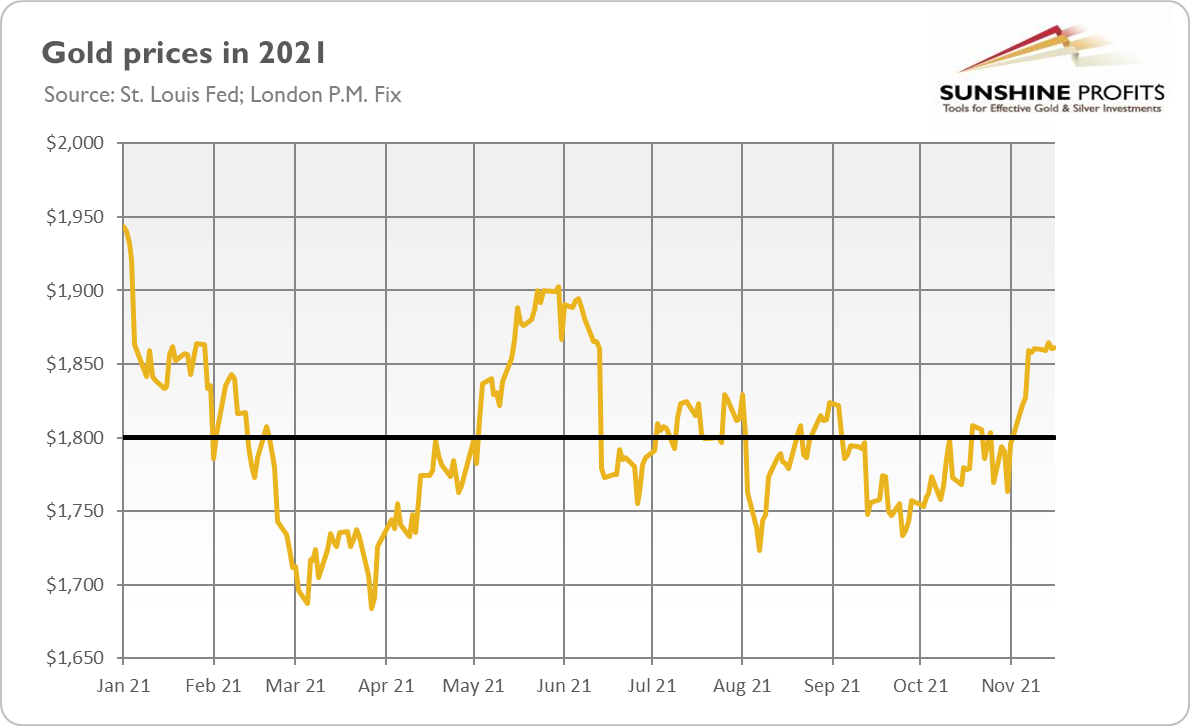 Normal profit-taking took place, but gold found itself under pressure also because of the hawkish speech by Fed Governor Christopher Waller. He described inflation as a heavy snowfall that would stay on the ground for a while, rather than a one-inch dusting:

Consider a snowfall, which we know will eventually melt. Snow is a transitory shock. If the snowfall is one inch and is expected to melt away the next day, it may be optimal to do nothing and wait for it to melt. But if the snowfall is 6 to 12 inches and expected to be on the ground for a week, you may want to act sooner and shovel the sidewalks and plow the streets. To me, the inflation data are starting to look a lot more like a big snowfall that will stay on the ground for a while, and that development is affecting my expectations of the level of monetary accommodation that is needed going forward.

So, brace yourselves, a janitor is coming with a big shovel to clean the snow! Just imagine Powell with a long-eared cap, gloves, and galoshes giving a press conference! At least the central bankers would finally do something productive! Or… maybe shoveling is not coming! Although the Fed may turn a bit more hawkish if inflation stays with us for longer than expected previously, it should remain behind the curve, while the real interest rates should stay ultra-low. The December FOMC meeting will provide us with more clues, so stay tuned!