It was low volatility, as typically expected around a US Thanksgiving. AUD and NZD are the strongest majors by a thin margin, CAD is the weakest.

Most of the news came from Japan today. BOJ’s Governor Kuroda has called for structural reforms and deregulation to boost Japan’s economy, on the basis that monetary policy and fiscal policy is not enough. There’s also room to ease further. Industrial output fell at its fastest pace in nearly a year. Separately, government banks are aiding firms prepare for an overseas downturn.

South Korea and Japan are set to have trade talks in December.

It appears that Australian’s are continuing to use lower interest rates to pay down debt over spending. Private sector credit growth slowed to 0.1% in October, its weakest in four months. Whilst housing credit ticked higher by 0.2%, although at 3% YoY it’s the weakest rate of growth since records began in 1976.

UK confidence is stuck at a 6-year low, according to the GfK survey. 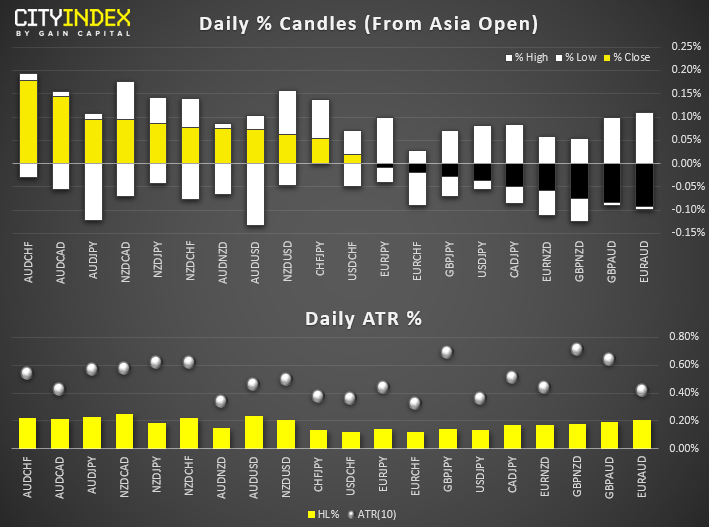 DXY produced another indecision candle below 98.45 on lower volumes surrounding US Thanksgiving. Roll on Monday…

EUR/USD continues to consolidate above 1.1000, a clear line in the sand between bullish and bearish setups (with parity being the equivalent on USD/CHF). We just need volatility to return.

USD/JPY is on track for its most bullish close in 3 weeks. The daily trend remains bullish above 108.24 but, judging how it’s anchored to recent highs, suspect it wants to break above 109.50.

AUD/USD is on track for a 4th consecutive down week, although at current levels could finish with an inverted hammer on the weekly chart (potentially bullish). 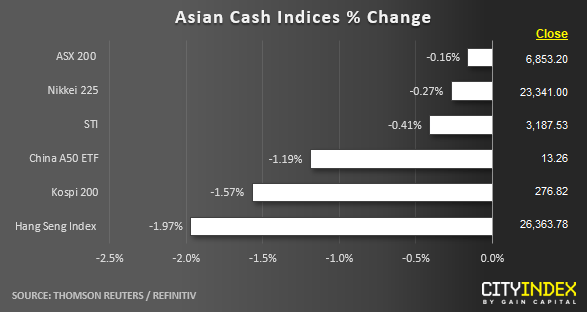 All key Asian stock indices are trading in the red so far as we head into the closing month of Nov while the U.S. stock market was shut for Thanksgiving holiday yesterday.

U.S-China trade deal “overhang” has continued to cast a cloud of uncertainty over the minds of market participants on what are the exact actions China will take to retaliate against the U.S. bill in support of Hong Kong protesters.

In addition, Hong Kong is now bracing herself for another fresh round of planned mass protests over this weekend after a week of relative calm since the local district council election on last Sunday where the pro-democracy camp claimed an overwhelming victory.

Japan’s economy has continued to weaken where industrial output has slipped at the fastest pace since Jan 2018 to record a decline of -4.2% m/m in Oct below consensus forecast of -2.1% m/m.

Germany 30: Broke below minor ascending trendline support from 21 Nov 2019 low after failure to breakout 13350 key medium-term range resistance. At risk of shaping a further potential push down to test the next near-term support at 13120. 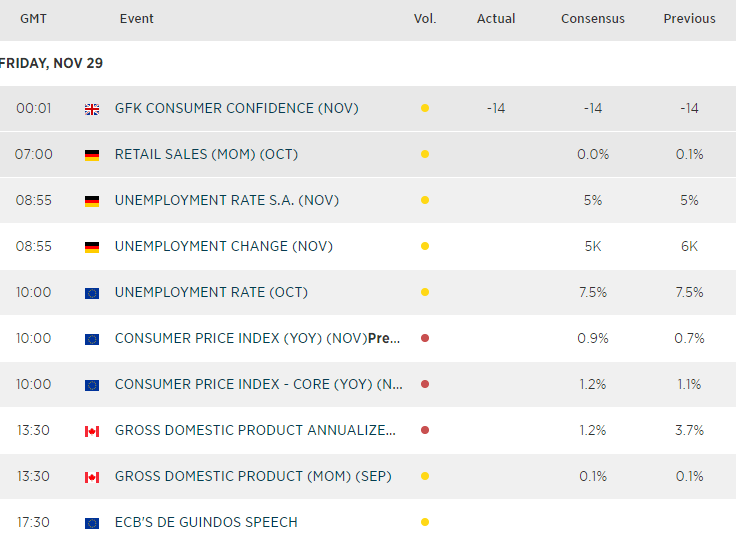