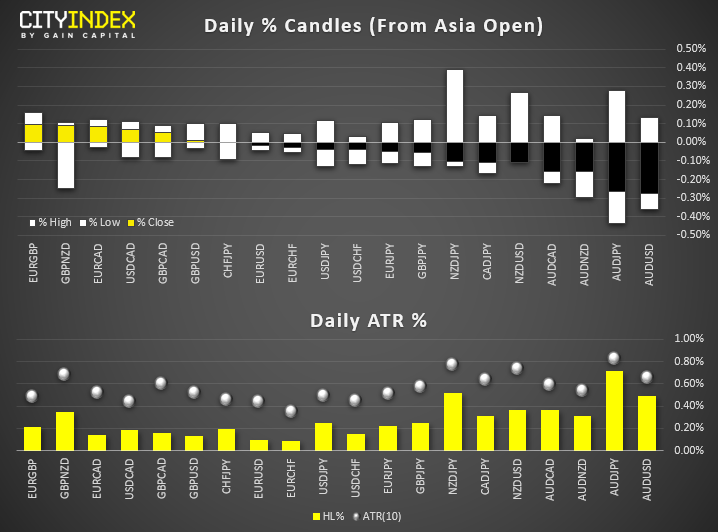 Officials from US and China have confirmed that both sides could roll back tariffs as part of the phase one trade deal, although no timetable has been presented.

Australian home loans rose for a second month thanks to record low rates and rising house prices. Yet until we see the rest of the economy follow suit (wages, inflation, consumption and a lower debt to savings ratio) it’s unlikely to call for higher rates, unless RBA targets rising house prices for once…

Household spending rose 9.5% YoY in Japan, its fastest pace since 2001. Still it was fully expected according with the pending sales tax hikes just around the corner. The last time Japan hiked sales taxes, a similar pattern emerged only to see consumption crash the following months.

AUD is the weakest major, minor ranges elsewhere across the FX space. AUD/JPY saw the most volatility, with its daily range spanning 87% of it ATR. Moreover, it’s found this volatility around the 200-day eMA, although today’s bearish price action has remained within yesterday’s range. 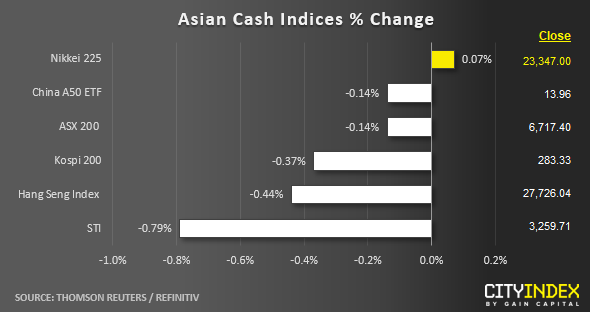 Key Asian stock markets have not taken the positive cue from the U.S. stock market where all three benchmark indices; S&P 500, Nasdaq 100 and Dow Jones Industrials hit another fresh all-time highs on the backdrop of U.S-China trade deal optimism after the Chinese Commence Ministry commented that both sides had agreed to roll back some of the imposed tariffs.

The latest trade deal related news flow from the U.S. has been lukewarm where media has reported from unnamed sources that an agreement between U.S. and China to roll back existing tariffs as part of the “Phase One trade deal” has faced fierce internal opposition in the White House and even from outside advisors. So far, the U.S. Trade Representative’s office has not commented on whether or not there will be tariff rollbacks.

The markets are appearing to get “lethargic” on such “hot and cold” trade deal related headlines without any concrete direction where it will lead until a real deal is being signed off.

Almost all Asian stock markets are in the red after hitting 5-6 months highs. The worst performer is Singapore’s Straits Times Index (STI) that has dropped by -0.79% so far led by Golden Agri-Resources, Ascendas Real Estate Investment Trust and Genting Singapore that have tumbled by -6.52%, -5.45% and -3.13% respectively.

Casino operator, Genting Singapore has reported a weak Q3 earnings where net profit has dropped to S$158.9 million from S$210.4 million y/y and revenue fell about 7% which has triggered a negative reaction on its share price; it drop as much as 3.7% to hit a current intraday low of S$0.925, the biggest intraday percent drop in 4-months.

The 10-year Japanese Bond Government (JGB) yield has continued to inch higher in line with the rest of the developed nations’ sovereign bond yield, on track for its biggest weekly climb since May 2013. An increase in JGB yield can trigger a liquidity tightening condition that explains the earlier intraday gain of 1% seen in the Nikkei 225 has been reversed to the downside.

BoC surprised markets with a dovish meeting last month by lowering their projections. This means CAD traders may be more sensitive to a weak employment print later today, had they been otherwise. 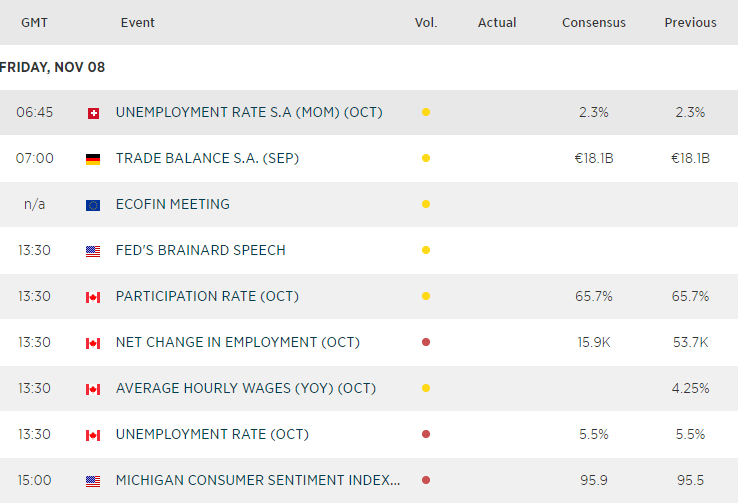