Lloyds share price has dived by as much as 9% in early trade as the UK’s largest retail bank plunged into a loss in the second quarter and warned on the outlook.

Expectations were low heading towards the release of Lloyds results, but the sheer size of the amount that Lloyds is putting aside for bad loans is nothing short of worrying.

Lloyds put aside a bigger than expected £2.4 billion for bad loan provisions up from £1.4 billion in the first quarter. This impairment charge eats directly into profits. Provisions for soured mortgage loans had been excluded from Q1 but they have been included in Q2 amid fears of the impact of high levels of unemployment.

Whilst the government is supporting the labour market through the job retention scheme currently, that support will be weaned away over the coming months, which will mean that the impact of the coronavirus crisis will start to show through in rising unemployment and consequently mortgage loan default.

Larger than expected bad loan provisions have been prevalent in major banks throughout Europe with rival Barclays reporting a larger than forecast £1.6 million provision and Santander following suit.

Net interest margins, which measure the profitability of lending sunk by a whole 20 basis points to 2.59% in Q2 after the BoE slashed interest rates to 0.1% and as demand for loans and mortgages evaporates.

As the UK’s biggest domestic bank, Lloyds is considered a bellwether for the wider UK economy. The fact that Lloyds has warned that the impact from coronavirus was worse than forecast and that the bank has adopted a gloomier outlook doesn’t bode well.

Lloyds is now modelling for a worst-case scenario of -17.2% GDP contraction this year compared to just -7.8% modelled in Q1, although the baseline case of -5% GDP contraction remains unchanged.

Given the perfect storm that Lloyds is facing the chances of its dividend being re-instated anytime soon are looking weak at best.

Lloyds plunged by as much as 9% on the open following the release, hitting an 8 year low of 25.7p.

The share price trades firmly below its 50, 100 and 200 daily moving averages and below its ascending trendline in a clearly bearish chart.

On the flip side, a break above today’s high of 26.1p could open the door to 30p the  trendline and psychological resistance level. 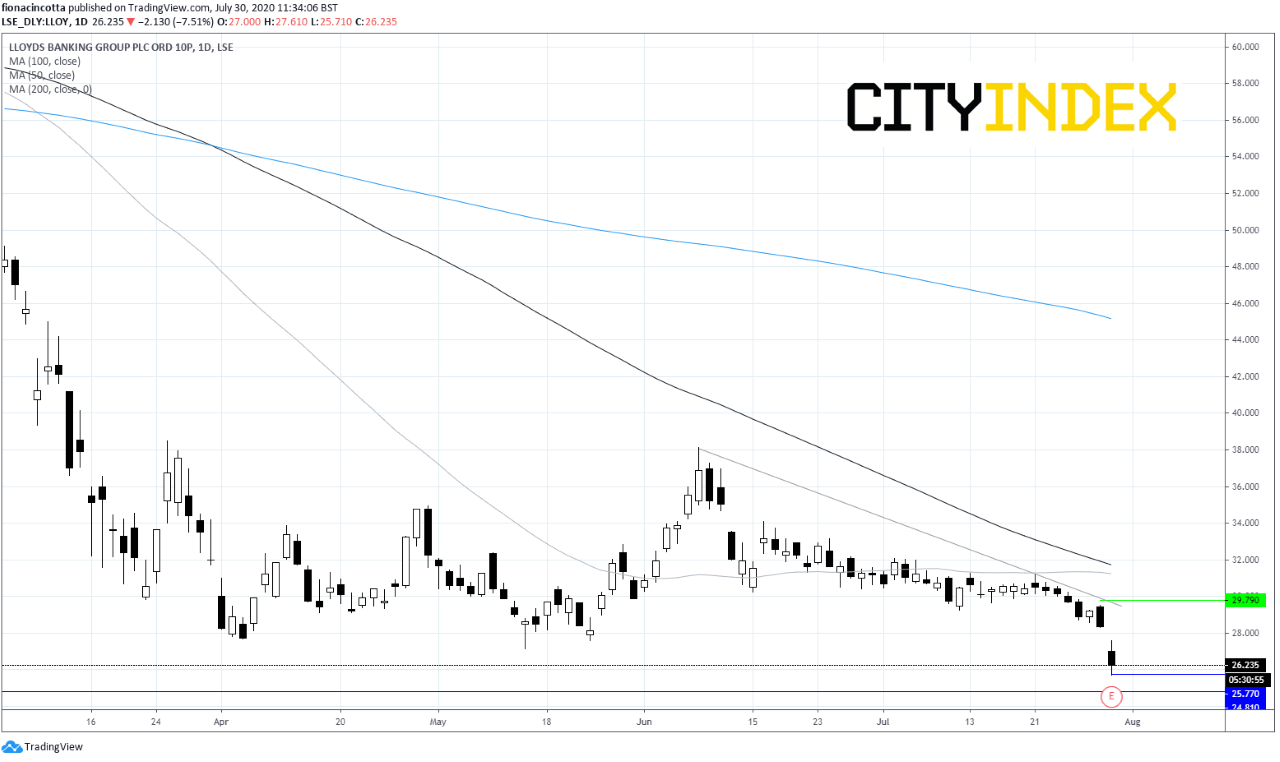