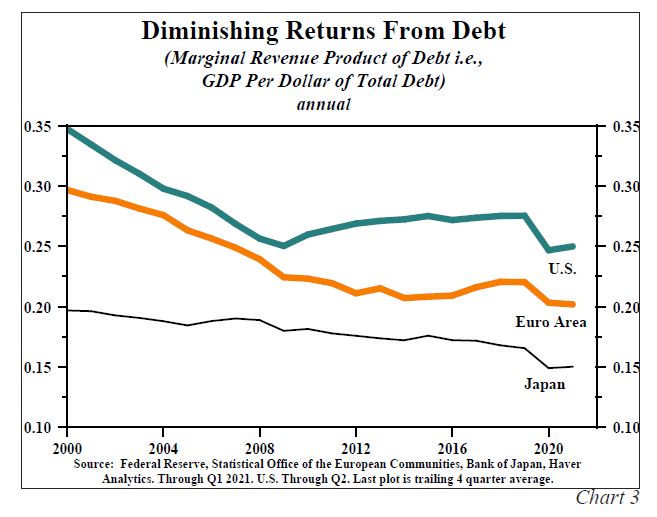 Hunt's analysis is six pages long. I present a few paragraphs on the negative impact of debt in the economy. The titles are mine, the paragraphs are from Lacy.

Excessive indebtedness acts as a tax on future growth and it is also consistent with Hyman Minsky’s concept of “Ponzi finance,” which is that the size and type of debt being added cannot generate a cash flow to repay principal and interest. While the debt has not resulted in the sustained instability in financial markets envisioned by Minsky, the slow reduction in economic growth and the standard of living is more insidious.

Swedish econometricians Andreas Bergh and Magnus Henrekson, writing in the prestigious Journal of Economic Surveys in 2011, substantiate that there is a "significant negative correlation" between the size of government and economic growth. Specifically, "an increase in government size by 10 percentage points is associated with a 0.5% to 1% lower annual growth rate." This suggests that if spending increases, the government expenditure multiplier will become more negative over time.

Second, Ethan Ilsetzki (London School of Economics), Enrique Mendoza (University of Pennsylvania), and Carlos Vegh (University of Maryland) in a study published by peer reviewed the Journal of Monetary Economics in 2013, concluded that the government spending multiplier is sharply negative in highly indebted countries. The definition of highly indebted is central government debt exceeding 60% of GDP, a condition that is met by most of the major economies of the world.

Third, an econometric study by Alberto Alesina, Carlo Favero and Francesco Giavazzi in the Journal of International Economics in 2015, corroborates that the tax and expenditure multipliers are both negative, with the tax multiplier more negative. Quite significantly, these conclusions are supported by domestic as well as international data. Alesina is a Professor at Harvard, while Favero and Giavazzi are professors at IGIER-Bocconi.

Fourth, Cristina Checherita and Philip Rother, in research for the European Central Bank (ECB) published in 2014, investigated the average effect of government debt on per capita GDP growth in twelve Euro Area countries over a period of about four decades beginning in 1970. Dr. Checherita, now head of the fiscal affairs division of the ECB and Dr. Rother, chief economist of the European Economic Community, found that a government debt to GDP ratio above the turning point of 90-100% has a “deleterious” impact on long-term growth. In addition, they find that there is a non-linear impact of debt on growth beyond this turning point. A non-linear relationship means that as the government debt rises to higher and higher levels, the adverse growth consequences accelerate. 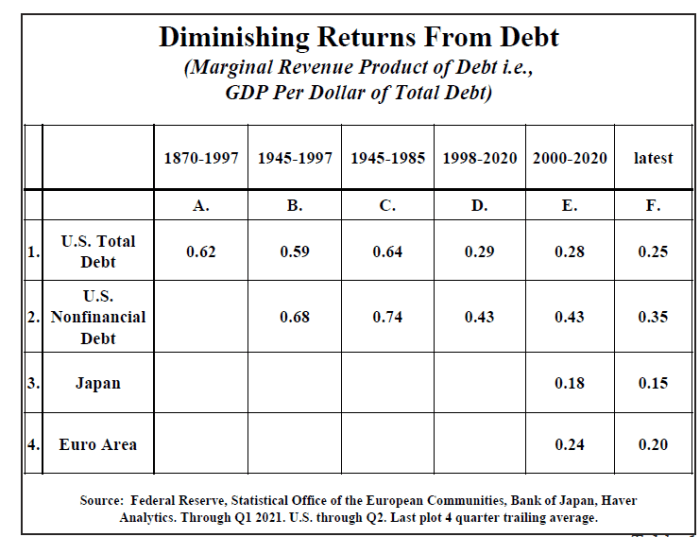 In the third quarter, economic growth slowed sharply, registering a fraction of the growth rate in the first half. We expect the third quarter’s weakness to continue over the balance of this year and into 2022.

During the 1970s, unlike currently, the velocity of money was stable (although not constant). As a result, the aggregate demand curve (C + I + G +X = M x V) also shifted steadily outward. This allowed the inflation from the supply side disruptions to become entrenched. Currently, however, the decline in money growth and velocity indicate that the inflation induced supply side shocks will eventually be reversed. In this environment, Treasury bond yields could temporarily be pushed higher in response to inflation. These sporadic moves will not be maintained. The trend in longer yields remains downward.