The world’s reserve currency took a beating lately, as the resurgence of infections in the US painted a darker outlook for the nation’s economic recovery and sparked expectations for more action by the Fed. But FX is a two-way game, and the dollar’s downfall wouldn’t have been so sharp without better news out of Europe bolstering the euro. Is this just the beginning of a larger rally in euro/dollar that is predicated on Europe outperforming the US? It seems so, though calls that the dollar is losing its reserve currency status appear groundless.

It’s a rare phenomenon, but there’s a growing sense among investors that Europe will recover faster than the US, thanks to a better management of the health crisis. America is still struggling to contain infections in several states, and that is threatening to put the breaks on the economy’s comeback. Indeed, as the Chairman of the Fed highlighted on Wednesday, real-time data suggest the recovery is already losing steam.

In the financial markets, this has translated into a weaker dollar, as the worsening outlook has fueled expectations for a more aggressive Fed. In turn, that’s pushing down on US bond yields, eroding what little interest rate advantage the greenback had left.

At the same time, the dollar may be feeling the heat of record-breaking US deficits. So far this year, the government’s deficit is reported at $2.7 trillion, and Congress is working on a new rescue package that will cost at least another $1 trillion. In reality, it will probably be much more as the Democrats are pushing for $3 trillion. If we assume it comes down to $1.5 trillion, the deficit will exceed 20% of GDP this year – and that’s without anything else before year-end. 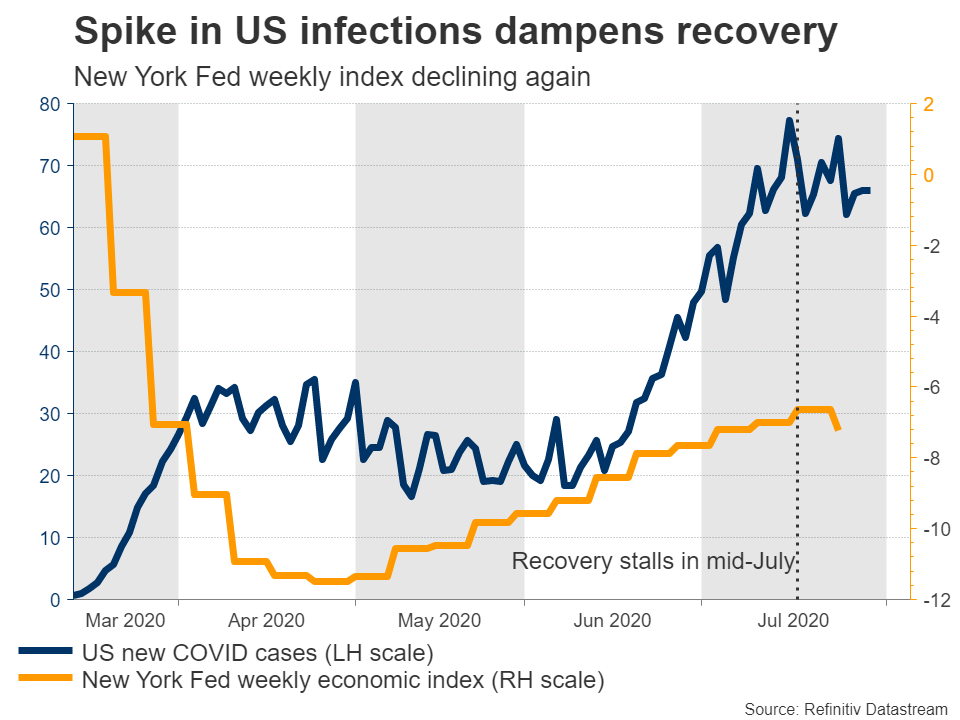 The final leg of this bearish dollar story is safe-haven demand for the reserve currency, which has mostly evaporated. Financial markets have calmed down, stocks are back near record highs, and volatility is declining, all of which is pushing investors away from the greenback’s safety.

But fears around the US aren’t enough for the dollar to drop so significantly. After all, FX is a zero-sum game in the sense that for a currency to lose, some other must win. The winner this time was the euro.

Not only did Europe take a more proactive approach to the lockdowns and was more vigorous with contact tracing, but the government stimulus – even though smaller in absolute size – was more targeted to supporting wages and jobs, limiting the damage to the labor market.

More importantly, EU leaders used the crisis to push for greater transfers between economies. After lengthy negotiations, the EU approved a large recovery fund that will distribute loans and grants to assist the most devastated economies. Grants don’t have to be paid back, thus helping nations with already-high debt levels like Italy. 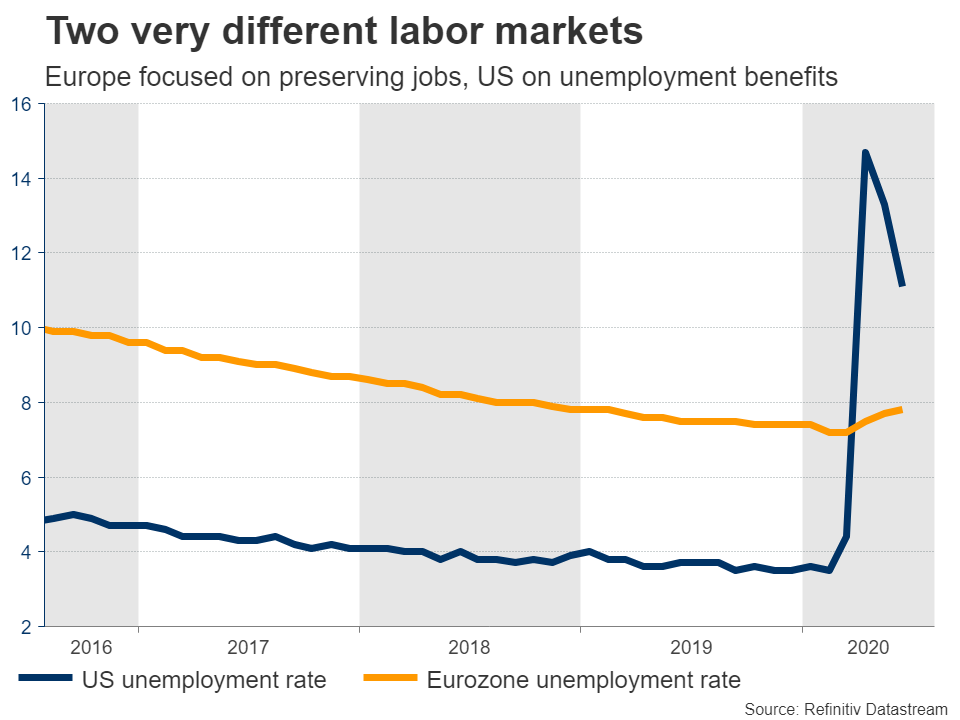 This is a game changer. This was the Eurozone’s Achilles’ heel – the lack of a federal government like in the US that can assist individual states when they are in trouble. Even though this step is still miles away from a proper fiscal union, it still sets a significant precedent that might ultimately give rise to a real risk-sharing instrument, like Eurobonds.

Indeed, consensus forecasts suggest the euro area will shrink by 8% this year, worse than the 5.6% contraction seen for the US due to the stricter lockdowns. But for 2021, expectations are for a 5.5% rebound in Europe, faster than the 4% in the US. That said, these numbers are a little outdated and probably don’t reflect the latest spike in US infections, so the real situation today likely favors Europe even more.

The question now is whether this is the beginning of a new uptrend in euro/dollar, or whether this narrative is mostly priced in already. Admittedly, most factors suggest it can continue.

For one, it’s becoming clear that the Fed will take more decisive action in September, possibly by committing to not raise rates again until inflation exceeds its 2% target. Meanwhile, asset managers worldwide spent the last decade piling into and being overweight US assets. They now have a reason to diversify, and the obvious choice is Europe. 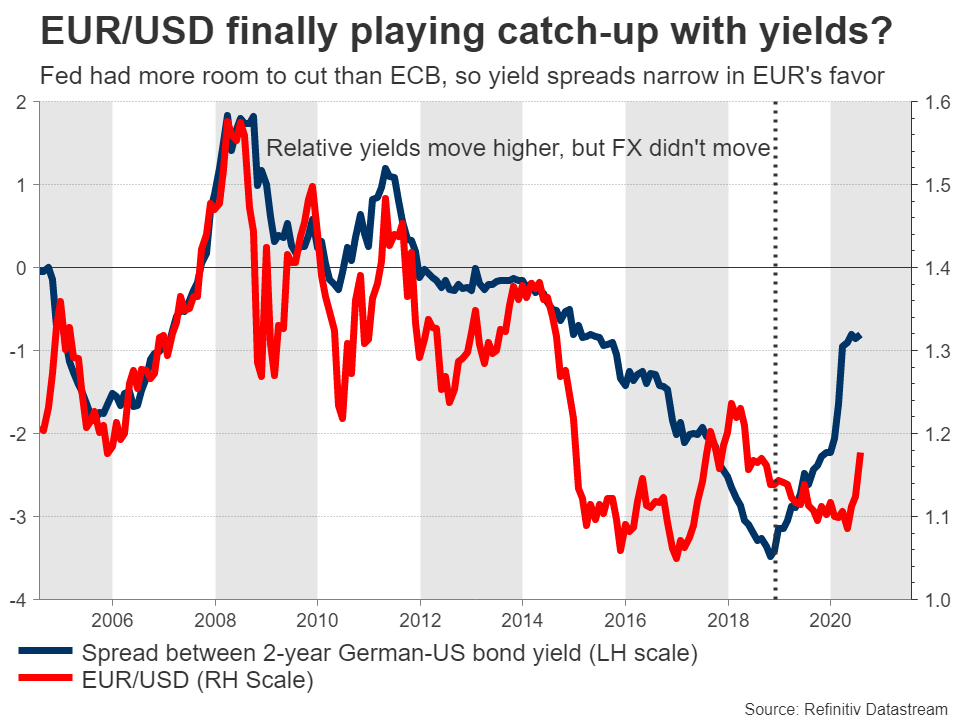 Then there’s an imminent US election to consider. Donald Trump is behind in the polls, lagging Joe Biden by 9 percentage points nationwide. He’s also losing in every battleground state. Biden wants to reverse some of Trump’s tax cuts and raise the corporate tax rate again – is that risk priced into equities and the dollar?

Finally, nobody is talking about this, but the scenario that credit rating agencies downgrade US bonds is becoming a real possibility, given the historic surge in debt.

Now to be clear, all this doesn’t mean that some collapse in the dollar is coming. Yes, the greenback might lose some more ground, but concerns that it is losing its reserve currency status seem baseless.

Most global transactions are still settled in dollars, US capital markets are far larger and more mature than anywhere else, and there’s really no other alternative. The yuan can’t be a reserve currency while China has a closed capital account, which is essentially a form of capital controls, and the euro has no fiscal union behind it. The price action in March speaks for itself: when the world economy falls off a cliff, all investors want is the dollar.

So what could breathe life back into the reserve currency? The obvious ‘fix’ would be the US virus situation coming under control, allowing for a faster recovery and shattering the whole euro-outperformance narrative.

The opposite may work too. If Europe is hit by a second wave for example and volatility returns, the dollar could become the market’s darling again, both as a haven play and as economic expectations for Europe are marked down.

Another saving grace might be the European Central Bank. If the euro keeps this momentum up, the ECB may become uncomfortable with a stronger currency, as that pushes down on inflation. Hence, the ECB may express discomfort with the exchange rate, or find some other way to clip its wings.

The trend is your friend

All told, in this post-pandemic era, economic narratives can change in a flash. At this stage, it seems like Europe is set for a faster and smoother recovery, but that can change quickly if more infection waves hit the continent. Plus, the US might catch up at some point.

The point is that in such a fluid environment, where sentiment can turn quickly, technical indicators can sometimes give a clearer picture of where markets are headed.

Specifically, for all its recent gains, euro/dollar is still trying to overcome a long-term downtrend line drawn from the 2008 peak. For the euro to really extend this rally, it needs a weekly close above this crucial line. Until that happens, some extra caution is warranted.