It seems that choosing GDXJ to short the PMs was a good decision – juniors closed the day at new 2021 lows. Will our profits only grow from now on?

Gold’s yesterday’s intraday attempt to rally was not bullish. On the contrary, it was what usually happens right before a big slide. Especially given the USDX’s breakout.

Let’s start with the latter. 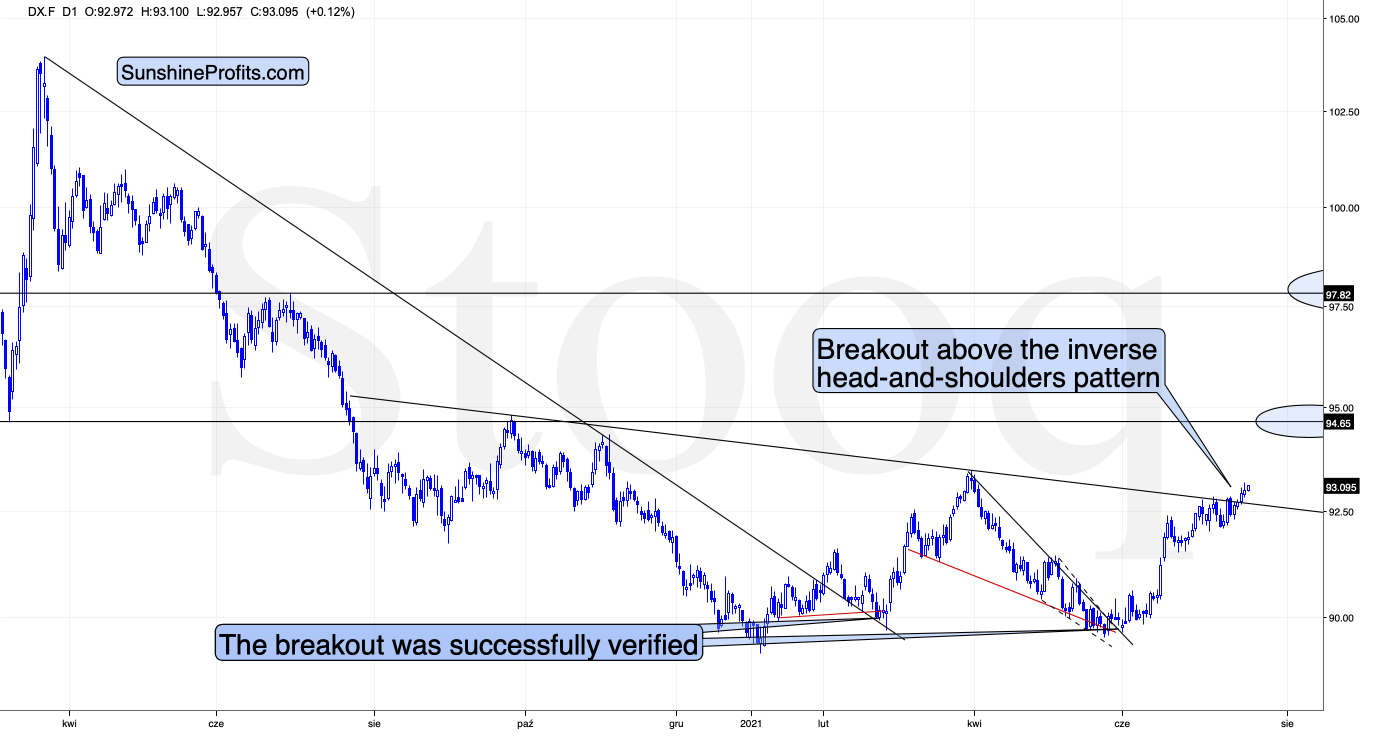 Yesterday there was a second session in a row when the USD Index closed above the neck level of the broad (~yearly) inverse head-and-shoulders pattern. Furthermore, it’s been moving slightly higher in today’s session, at least so far.

This is a very bullish price action – the USDX’s breakout was not accidental, nor was it based on geopolitical news (the latter tends to trigger temporary moves that are then reversed). Additionally, it was preceded by a consolidation. Consequently, it seems that this breakout has a huge chance of being confirmed (we need just one more – today’s – daily close) and followed by another sharp rally. The previous highs at about 94.5 are the initial upside target, but based on the inverse H&S pattern, the USDX is likely to rally to about 98.

Therefore, what just happened (the breakout above the formation’s neckline) has really bullish implications for the U.S. currency. And since the latter tends to move in the opposite direction to gold, silver, and mining stocks, it’s also very bearish for them.

Gold and Its stocks

That would be enough on its own to make the outlook for the PMs bearish, but we have many more bearish indications, and some of them are truly profound. The most bearish confirmation of the bearish price prediction for gold doesn’t come from the USD Index but from the extreme underperformance of gold stocks relative to gold. 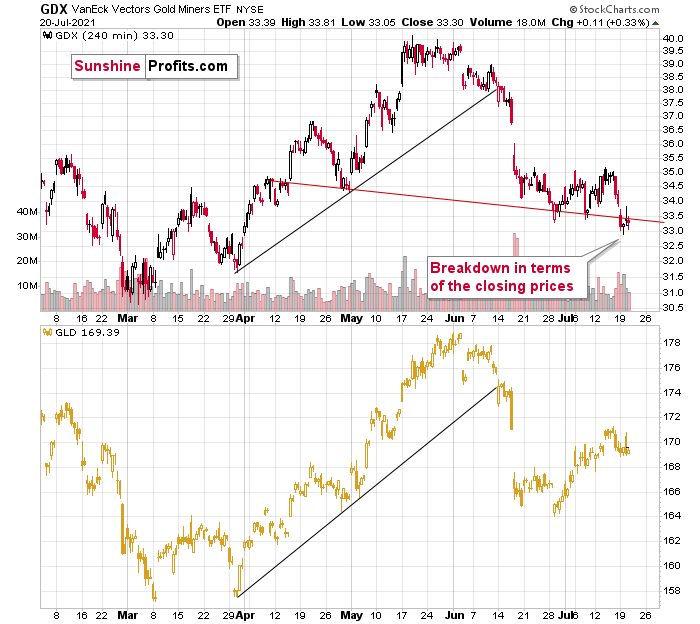 The GDX ETF (senior gold miners) moved below the recent lows, and it closed the day below the neck level of a head-and-shoulders pattern based on the 4-hour candlestick chart. At the same time, the GLD ETF is still relatively close to the middle of its previous decline. If the comparison is still unclear, please consider the mid-May bottom. The GLD ETFclosed just slightly below it, while the GDX a few dollars below it.

And if you think this kind of relative weakness is bearish, just wait until you see what the junior mining stocks did. 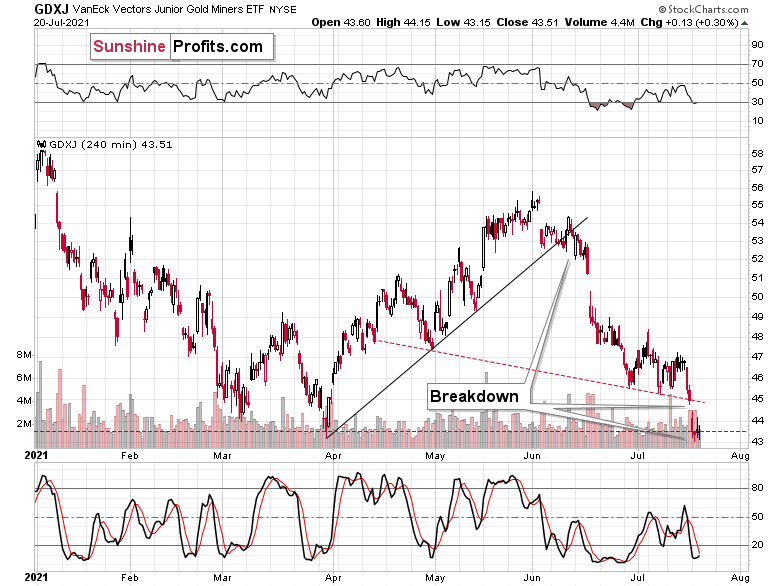 Junior miners declined not only below the neck level of the recent head-and-shoulders pattern (very clearly in both: intraday and closing price terms), but they actually closed the day at new 2021 lows! And they didn’t invalidate this breakdown yesterday, despite the intraday attempt!

There are two markets that primarily impact the performance of junior mining stocks. One is gold, and the other is the general stock market. Gold is now about $140 above its 2021 lows, while the S&P 500 is over 16% above its 2021 highs. And yet, the GDXJ is below its previous 2021 lows. It seems that choosing junior miners as a proxy for shorting the precious metals sector was a good decision – our profits are rising rapidly, and it seems that they are going to soar much more in the following weeks.

What’s more, juniors are underperforming senior gold miners too. You can see that by comparing the two previous charts and by examining their ratio. 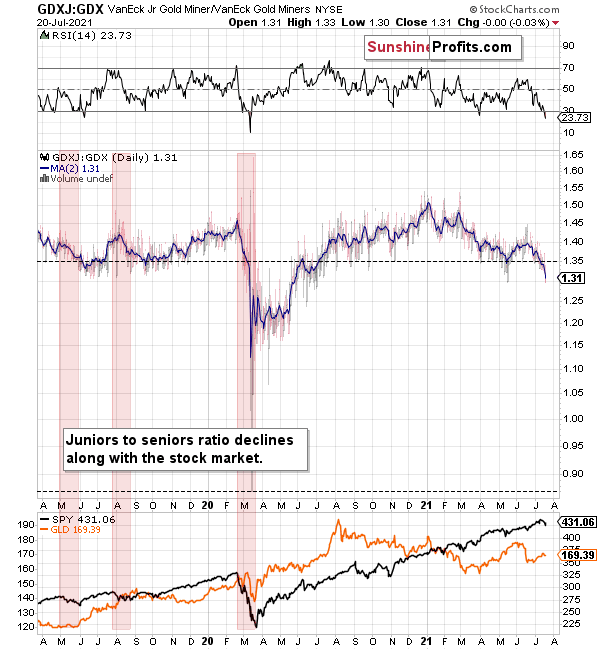 The ratio declines when junior miners underperform seniors. This happens often when the general stock market declines – juniors are more correlated with the latter than the seniors. Interestingly, juniors underperformed recently, even while stocks were strong. If the general stock market declines from here, the underper formance is likely to take an epic form – just as it did in early 2020.

This level of underper formance and weakness is truly breathtaking.

If miners – in particular, juniors – were able to decline so much without meaningful help from gold and the general stock market, just imagine the carnage they will suffer once this “help” finally arrives.

And given the breakout above the neck level of the inverse head-and-shoulders pattern in the USD Index, it seems like the key trigger to set the wheels in motion is already here.