Sterling slipped after UK Prime Minister Boris Johnson was moved to the intensive care unit for coronavirus treatment, but the broad risk trade remained strong on optimism with slowing growth in the number of Corona virus cases. The Australian dollar was the top performer while the yen lagged. The RBA decision is up next. A new Premium trade was posted at the close of the NY session, backed by 3 charts and notes. 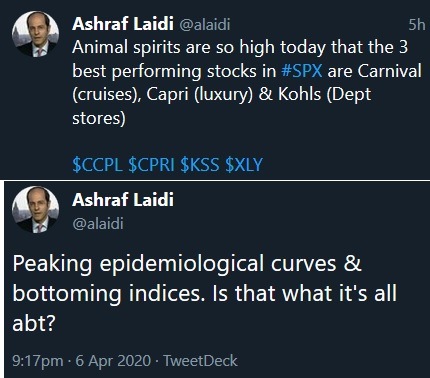 A statement from 10 Downing said PM Johnson was taken to the ICU for precautionary reasons and that foreign minister Dominick Raab had been deputized to handle the PMs duties. Cable quickly fell 80 pips to 1.2215 on the report but held the lows from earlier in the day on the report in the Russian press that he had been intubated.

In the US, the S&P 500 rallied 7% and broke around a cluster of resistance at 2650. That level was the late-March high and the 38.2% retracement of the coronavirus drop. A Fox Business news report indicated that Congressional leaders had briefed Wall Street executives about a new $1.5 trillion stimulus package that's in the works, and will be ready by month end. It's another sign of the endless appetite for spending from governments to cushion the economic decline. It's also another reminder of the costs that will need to be paid one day, and that helped fuel gold by $40.

In OPEC news, the battle lines for cuts on Thursday continue to harden with more reports that OPEC+ wants the US to participate. They have to know that it's virtually impossible to execute a national US cut. If that's the case, then the entire call is a public relations exercise.

Given the stakes, this would be an odd time for that kind of stunt. A more-likely outcome is a cut and a statement that says they expect the US to join. When that invariably doesn't happen, they will have cover to cheat or hike when it suits their needs. Oil fell nearly 8% on the day.

Looking ahead, the RBA is entirely expected to leave rates unchanged at 0.25% in the 0430 GMT rate decision. The latest minutes said there was no appetite for negative rates and the central bank has already unveiled QE. In normal circumstances it would be far too early to anticipate any kind of further action but at the moment it's not out of the question. A statement indicating that the pace of bond buying could increase could weigh on the Aussie, but it's an outlier.