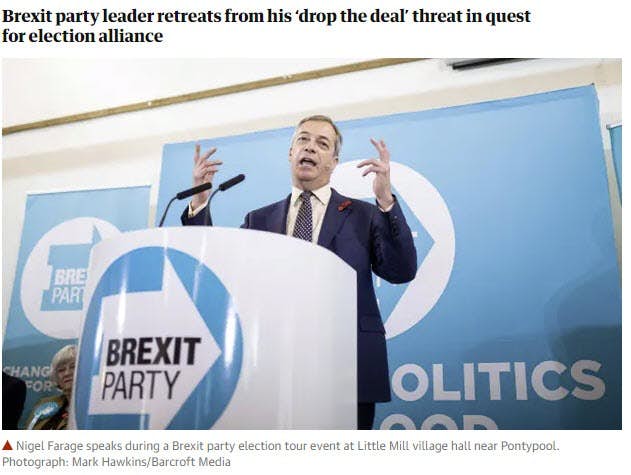 Nigel Farage has pulled back on his “drop the deal” threat to Boris Johnson in an attempt to get the prime minister to sign an election pact with the Brexit party.

Farage offered Johnson a deal last week in which his party would stand down in seats where the Tory candidate believed in a no-deal or “clean Brexit” and would want to abandon Johnson’s deal. In return, he wanted his party to have a free run at Labour heartland seats.

Farage has been criticised for the logic of his strategy to go after the vote in Labour heartlands, given that the majority of Ukip’s vote in the last two elections came from former Tory voters. His last significant inroad into the Labour vote was in 2010.

Speaking to the Guardian in Blackwood, South Wales, Farage said he would be willing to do a deal with the Tories if they accepted two principles.

“I think the deal is shocking because it is just not Brexit, but is there a way from a leaver’s perspective we can perhaps get this into a position that might be manageable? I think if you drop the clause that allows for endless extension that’s a huge head start, and, secondly, that this is a trade negotiation, not one based on political and economic alignment,” he said.

What Will Farage Settle For?

I read the above article yesterday as useless information.

Johnson would never agree to give the Brexit party free rein in any region. The proposed deal was a non-starter.

But what is Farage's real demand?

If it is merely to drop endless extensions, that is something Johnson has already stated.

Today, the Daily Mail reports Nigel Farage IS 'in secret talks with Boris Johnson to pull the majority of Brexit Party candidates out of the election - in return for the PM negotiating a harder deal.

There is not much "secret" about any of this. Both Johnson and Farage are all over the news.

Johnson Will Not Extend Transition Period

The great new deal we've done with our European friends takes us out of the EU in January. Let’s build a new relationship based on free trade not political alignment.

Boris Johnson says he will not extend the transition period beyond 2020.

That has been his position all along, but by emphasizing it and throwing in another small bone or two, Farage may go along.

If there is a deal based on Johnson saying he will not extend the transition period, then it was Farage who caved.

Farage was hoping to bully Johnson into No Deal at all vs a WTO deal within Johnson's deal.

Johnson's position has not changed, but today's video does emphasize a point that Farage wants.

If that changes the number of Brexit Party candidates, the it was a Farage bluff all along.

However, today's video allows Farage to save face. Farage can claim he got Johnson to bend even if he didn't.

We will not know until there is an official announcement.

Snatching Defeat From Jaws of Victory

Farage is under pressure in many places.

Brexit Central posted many articles discussing how Farage could snatch defeat from the jaws of victory.

The Sun comments Nigel Farage’s election threat is not a political strategy – it’s a suicide mission that could let Corbyn into No10.

Farage overplayed his hand. But we still do not know if it was a bluff.

Either way, Johnson's strategy has been to mitigate the damage Farage can inflict.

That video today is aims at just that. 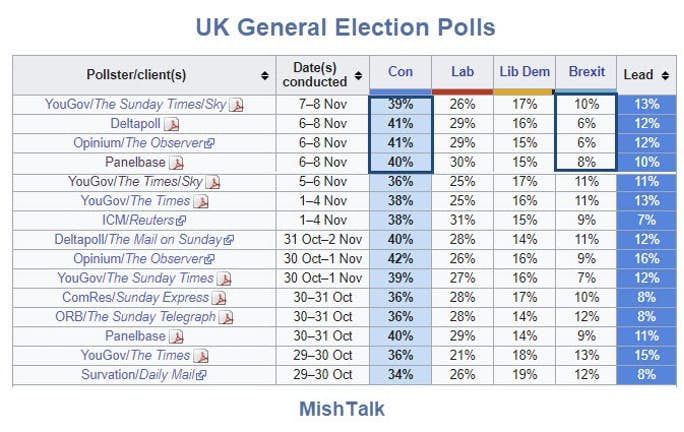 The four most recent polls were taken after Parliament was dissolved.

Please see Opinion polling for the 2019 United Kingdom general election for all the political parties.

Six Polls Before Election Announcement vs Four After Parliament Dissolved

Daniel Hannan is a true free market advocate. I would vote for him for US president in a flash if he could run.

One should respect his opinion.

Pact or Not, Johnson is Succeeding

Labour is also siphoning off votes from the Liberal Democrats and the Greens at a greater pace. However, the Greens only have 2.5 percentage points more to give.

A Johnson Farage alliance or simply more vote siphoning off the Brexit Party has much further to go relatively speaking.

Unless there is a radical shift in the polls, or the polls are radically wrong, the Brexit Party will not prevent a Johnson majority.

Alliance or not my UK Election Math suggests a big Tory Majority.