Italian elections were held on Sunday with early exit polls indicating a hung parliament as widely expected. Full counting of votes is expected to be completed only by 2pm CET following which the results will be officially announced.

In anticipation of the election outcome, the markets are seen moving to a risk off sentiment. Gold prices which had weakened last week posted a strong reversal toward Friday's close.

Data from the UK will see the release of the services PMI data. Economists forecast that services activity in the region rose slightly to 53.3, up from January's 53.0. Services data continues in the U.S. trading session. Markit's final services PMI is forecast to show an unchanged print at 55.9 while ISM's non-manufacturing PMI is expected to fall to 58.9, down from 59.9 that was registered in January. 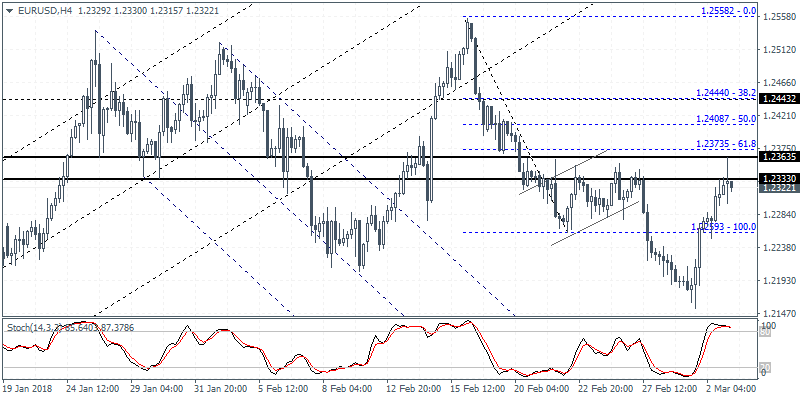 EURUSD (1.2322): The EURUSD edged higher on Friday as the reversal from Thursday's bullish engulfing pattern gave a slight push to the euro. However, with price action back near the familiar resistance level of 1.2363 - 1.2330, we expect to see a near term decline. The fact that EURUSD was back at the resistance level indicates that the bias is to the downside. We expect to see the EURUSD continue to post declines but price action could be limited heading into this Thursday's ECB meeting. The downside target for EURUSD remains at 1.2090 region. 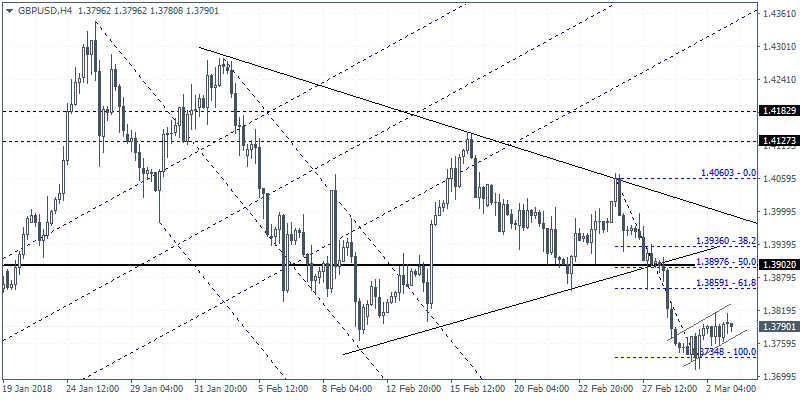 GBPUSD (1.3790): The British pound managed to post some modest gains on Friday following the reversal on Thursday. However, the downside breakout from the triangle pattern on the 4-hour chart indicates that the bias is to the downside. The currency consolidation in price suggests a bearish flag pattern that is emerging. This could indicate GBPUSD targeting the support level near 1.3611 - 1.3589 in the near term if the bearish flag pattern can be validated. 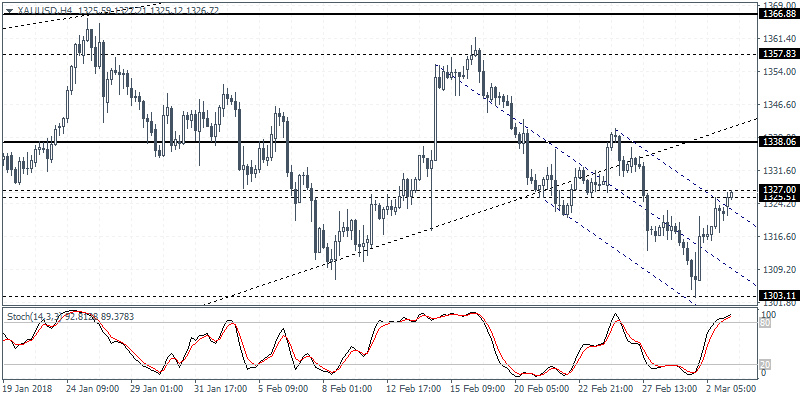 XAUUSD (1326.22): Gold prices posted gains on Friday reversing the Powell testimony led declines. With the risk off sentiment prevailing, we expect to see gold prices supported in the near term. However, price action is likely to be capped near the current resistance level of 1327 - 1325. Unless we see a strong breakout above this level, the bias remains to the downside. Gold prices are expected to fall back to the 1303 level of support to establish a firm retest of this level. However, the risk increases if gold prices post declines below this level. In this case, we could expect the declines to test the lower support at 1282 - 1274 region.