At first glance, it appears that the financial health of the European financial system is better today than it was a decade ago. Not only is the banking system better capitalized, but the amount of debt owed by banks has receded in recent years. Moreover, some of the debt that appears to reside in the financial sector via the balance sheets of "captive" financial institutions may truly belong in the non-financial corporate sector.

But a closer look leaves some cause for concern. Specifically, government bonds comprise a meaningful proportion of banking system assets in some countries, and there are governments in some euro area countries that have elevated levels of debt. An extended sell-off of government debt, if not an outright default by one or more of those governments, would deal a devastating blow to those banking systems. The banking system may not have as much debt as it did a few years ago, but the overall financial system in the Eurozone is not free of debt concerns.

Financial System Continues to Grow, Although Debt Has Leveled Off

In this, the fifth installment in our series on debt in the Eurozone, we examine the financial sector. As shown in Figure 1, the overall financial system held €25 trillion worth of assets when European Monetary Union (EMU) commenced in 1999. Monetary financial institutions (MFI)—largely banks and the central bank—accounted for roughly two-thirds of the system's assets at that time. The remaining one-third of the sector's assets was held by non-money market mutual funds, insurance companies, pension funds and other financial institutions (OFIs), which is a catch-all for a variety of institutional types that we will subsequently discuss in more detail.1 Over the past twenty years, the size of the financial sector has grown to more than €80 trillion. Although each of the sub-sectors has increased in absolute size, the OFI sub-sector has grown more than six-fold since 1999. The share of the financial sector's assets that is held by MFIs has declined to 46% while the OFI share has risen to 26%, up from only 13% twenty years ago. 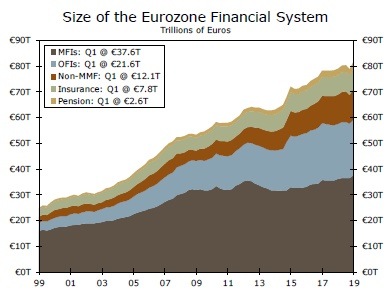 Turning our attention to the liability side of the balance sheet, the MFI and OFI sub-sectors account for the vast majority of the financial sector's debt, with most of the growth in recent years occurring among OFIs (Figure 2). Because MFIs and OFIs together account for roughly 75% of the financial sector's assets and 95% of its debt, we will limit our analysis to these two sub-sectors in the remainder of this report. 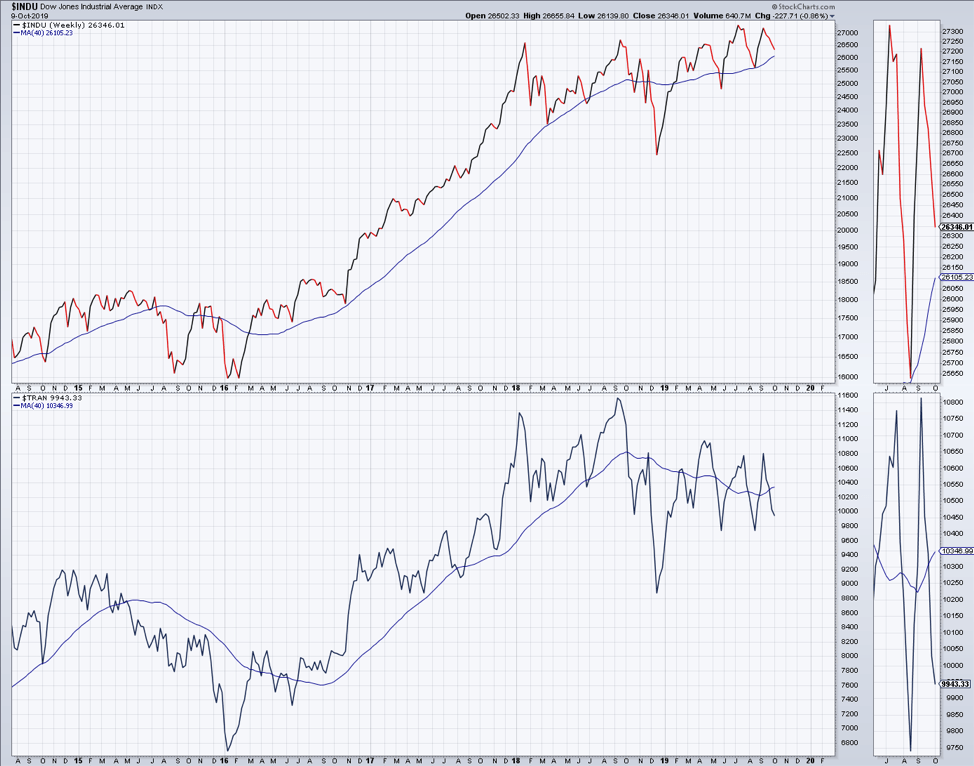 The MFI sub-sector includes deposit-taking institutions (largely commercial banks), the central bank and money market mutual funds. Although the balance sheet of the European Central Bank (ECB) has mushroomed from €1.5 trillion in September 2008 to nearly €4.7 trillion at present, the ECB currently accounts for only 12% of the assets of the MFI sub-sector. Likewise, the ECB has no debt obligations on its balance sheet. Depository institutions, which we will hereafter refer to as "banks," hold the vast majority of the sub-sector's assets, as well as all of its debt.

Figures 1 & 2 make it clear that the MFI sub-sector in the Eurozone enjoyed strong growth in the years leading up to the Great Recession. After trending lower between 2012 and 2014, the assets of the MFI sub-sector have risen nearly 20% over the past five years. Although the ECB has expanded its balance sheet in recent years, banking system assets have also grown, especially in the last year. But the debt obligations of the banking system have declined roughly €1 trillion over that period. In short, the banking system has become a bit more dependent on deposits to finance the loans that it makes. Specifically, the loan-to-deposit ratio of the banking system exceeded 90% as recently as 2011, but that ratio stands at 87% today. Because deposits are widely viewed as a more stable form of finance than debt, the banking system in the Eurozone is a bit less vulnerable today than it was a few years ago, at least in this regard.

Moreover, the overall banking system in the Eurozone is better capitalized today than it was in the years leading up to the global financial crisis. The capital buffers of the banking system were equivalent to less than 6% of assets in 2007 (Figure 3). But banks in the euro area have steadily built up capital in recent years, and those buffers today stand at roughly 8% of assets. In short, banks would be able to write down more troubled assets today than they could have a decade ago. But are their pockets deep enough to withstand an episode of extreme stress?

Furthermore, Spanish banks have significant exposure to Spanish government debt. Not only is the government debt-to-GDP ratio in Spain elevated—it is roughly 100% at present—but Spain is among the top 15 largest economies in the world. In sum, banks in the Eurozone generally do not appear to be as vulnerable today as they were a decade ago. However, their vast holdings of government debt securities leave some cause for concern because the financial health of some of those governments is not very robust at present.

Could OFIs Be the Achilles Heel of the Financial System?

Unfortunately, the OFI sub-sector is rather opaque. For starters, the OFI sub-sector is comprised of many different types of institutions including those that securitize assets, financial leasing companies, securities and derivatives dealers, venture capital firms, head offices of financial groups and holding companies, and "captive" financial institutions.2 Furthermore, there is not yet a harmonized reporting system across all 19 individual economies that comprise the euro area, so a precise breakdown of these institutions on a Eurozone-wide basis is not readily available. That said, we can glean some general insights into the OFI sub-sector from the fragmentary data that do exist.

First, about 70% of OFI assets are held in Luxembourg (€9.5 trillion) and the Netherlands (€5.2 trillion) with much smaller amounts residing in Ireland, Italy, France and Germany (Figure 5). According to the Banque Centrale du Luxembourg (BCL), the country's favorable tax and regulatory environment encourage OFIs to domicile in Luxembourg.3 Although current data are not available, the findings of a report that was published a few years ago are instructive. At the end of 2014, the assets of the OFI sub-sector in Luxembourg totaled nearly €8 trillion (Figure 6). The majority of these assets (€6 trillion) were held by "captive" financial institutions, which the BCL defines as "holding and issuing companies whose main objective is to facilitate intra-group transactions or to attract external funding for their parent company." Moreover, most of these assets were held by institutions that were affiliated with non-financial corporations (e.g., corporations in the oil, food, telecom and pharmaceutical industries). Research by economists at the Dutch central bank shows that the structure OFI sector in the Netherlands is very similar to its counterpart in Luxembourg.4 That is, most of the assets of the Dutch OFI sector are held by institutions that are affiliated with non-financial corporations

In short, a sizeable proportion of the OFI sub-sector in the euro area does not appear to be involved in the credit intermediation process. Rather, these companies act as conduits for transferring intracompany funds and/or they issue debt securities or borrow from banks on behalf of their parent companies, many of which are non-financial corporations. Consequently, the debt of the financial sector may not be as large as implied by Figure 2 if some of this debt is really the obligations of nonfinancial corporations. Unfortunately, determining exactly where the debt belongs is not straightforward because the readily available financial accounts data are generally not consolidated across sectors. That is, debt on the balance sheets of "captive" financial institutions may show up as debt of the financial sector rather than the debt of their parent companies, which are nonfinancial corporations.

Nevertheless, it is our sense that the financial sector in the Eurozone is not as levered today as it was a decade or so ago. As noted previously, the debt of the banking sector has receded in recent years. In addition, financial vehicle corporations (FVCs), which securitize assets on banks' balance sheets, are not as large today as they were a few years ago. Data from the European Systemic Risk Board show that the assets of FVCs in the euro area totaled €1.9 trillion at the end of 2017, down from about €2.4 trillion at the end of 2010.5 The decline in the size of the FVC sector in the Eurozone parallels the withering of asset-backed securities (ABS) issuers that we discussed in a report on financial sector debt in the United States. Furthermore, even if we took the total size of the MFI and OFI sectors at face value, it is still showing signs of deleveraging; the debt-to-GDP ratio of this aggregate is down nearly 19 percentage points from its peak in Q1-2015.

That said, there are some issues that raise concern. First, the increase in OFI debt in recent years may mask some build-up in debt in the non-financial corporate sector. Insolvency issues in the non-financial corporate sector would ultimately lead to problems in the financial sector. In addition, government bonds comprise a meaningful proportion of banking system assets in some countries. As we noted in Part IV of this series, there are governments in some euro area countries that have elevated levels of debt. An extended sell-off of government debt if not an outright default by one or more of those governments, although not our base-case view, would deal a devastating blow to those banking systems. The banking system may not have as much debt as it did a few years ago, but the overall financial system in the Eurozone it is not free of debt concerns.