The Bank of Canada (BoC) is due to announce its interest rate decision at 10:00 am EDT and a full rate increase of +25 bps is almost priced in already.

But, has the market got too aggressive on a BoC “slam dunk” rate hike? The stronger bets are on the BoC to hike by +25 bps and downplay the move by suggesting that future hikes are data dependent – “dovish hike”.

There is no question that the Canadian economy in general has improved with retail sales, GDP growth, CPI and employment activity improving significantly over the last couple of months, nevertheless the BoC has more options than to raise interest rates immediately such as signaling plans to tighten in March – a “hawkish” hold.

All week, FX traders who had all but priced in further tightening by governor Poloz have suddenly being paying up to hedge against the risk of a potential letdown. The cost to protect against significant loonie losses has been steadily climbing since reports that the U.S would/could withdraw from NAFTA if they did not get a better trade deal.

Note: NAFTA trade officials next meet in Montreal on January 23.

Monetary policy announcements are also this week due in South Korea, South Africa and Turkey.

1. Stocks pull back from record highs

In Japan, the Nikkei share average dropped overnight as mining, oil and shipping stocks lost ground, while bitcoin-related stocks tumbled after the cryptocurrency’s value extended its sharp decline on worries over tighter regulation. The Nikkei dropped -0.4%, while the broader Topix lost -0.2%.

Down-under, the Aussie ASX 200 was down -0.4% on broad based profit selling of mining stocks. In S. Korea, the Kospi rose +0.7%, its third consecutive day of gains.

In Hong Kong, the Hang Seng Index rose to a fresh closing high overnight, aided by continued strength in index heavyweight Hong Kong Exchanges and Clearing. At close of trade, the Hang Seng index was up +0.25%, while the Hang Seng China Enterprises index rose +0.64%.

In China, stocks end mixed as consumer, real estate firms take breather. The Shanghai Composite index was up +0.26%, while the blue-chip CSI300 index was down -0.23%.

In Europe, regional indices are trading mostly lower across the board following the yesterday’s pullback stateside. 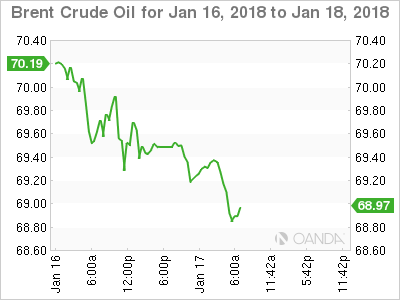 Tighter fundamentals have lifted both crude futures benchmarks about +13%since early December, helped by production curbs by OPEC and Russia, as well as by healthy demand growth.

Crude oil ‘bears’ are betting that the market may come under renewed pressure from rising U.S production. Yesterday, a report from the EIA indicated that it expected the country’s oil output to rise in February, with production from shale rising by +111k bpd to +6.55m bpd.

Gold prices have reversed their early gains overnight to trade slightly lower ahead of the U.S open, as the dollar recovered from a three-year low against G10 currency pairs. Spot gold is down -0.3% at +$1,334.86 an ounce. 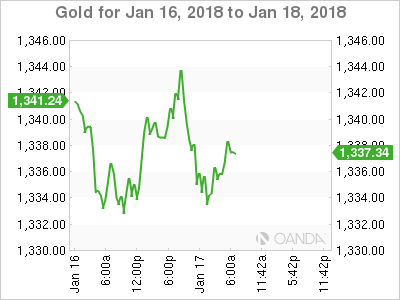 Investors will now get a look at data on U.S housing starts and jobless claims, as well as comments from multiple Federal Reserve officials for directional yield clues.

Note: The yield on the two-year U.S note, which is considered to be especially sensitive to expectations for interest-rate increases from the Fed, settled last week above +2% for the first time in a decade. 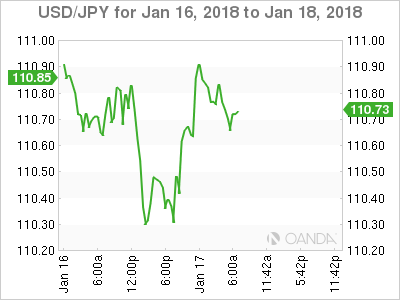 The USD has managed to move off its worst levels against G10 currency pairs.

The EUR/USD (€1.2233) has managed to back away from its three-year overnight Asian high print on some aggressive profit taking. Various ECB members (Nowotny, Constancio and Villeroy) have made various comments on the recent price action of the ‘single’ currency. However, its the current German geo-political risks that has investors rethinking their ‘long’ EUR strategy ahead of this weekends German SPD vote on whether the social democrats are to go ahead with coalition talks with Chancellor Merkel (Sunday Jan 21).

GBP/USD (£1.3800) is a tad higher ahead of another vote in the House of Commons on the E.U withdrawal bill – The legislation is not expected to have any issues in its third reading, but could face some turbulence when it moves into the House of Lords.

USD/JPY (¥110.67) is slightly higher, but remains below the psychological ¥111.00 handle. The markets focus is switching to next week’s Bank of Japan (BoJ) meeting and is wondering if Kuroda and company might adjust their “yield control guidance”.

USD/CAD (C$1.2433) is not straying too far from yesterday’s close ahead of this mornings Bank of Canada (BoC) rate decision. Markets are looking for the central bank to hike for the third time in its current tightening cycle, maybe a ‘dovish hike’. 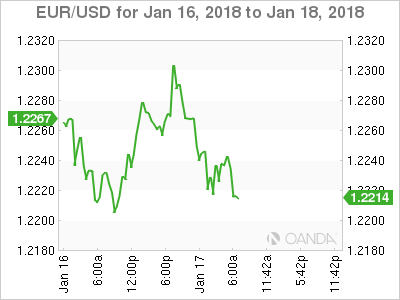 Note: Compared with 2017, annual inflation fell in twenty-three Member States, remained stable in four and rose in one. 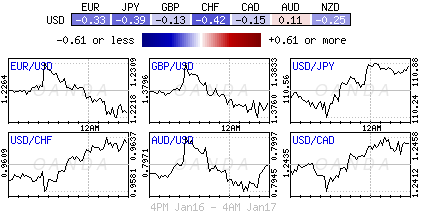