This morning US yields have been able to pull back to where they started the week, but the USD sell off is yet to follow.  It feels like the market is now more wary of the USD downtrend after getting burnt this week.  So, we are seeing cautious trading across most markets.

However, given the pullback in US yields and more comforting words from FOMC members we do expect the USD downtrend to be able to continue from here as those who were stopped out this week edge cautiously back into the trade.

The comments on US policy came from Brainard pushed back against tapering expectations for later this year saying that they are far away from their objectives and the US economy will need support for quite some time.  Harker said “We’re willing to overshoot inflation a little bit, not let it run out of control”. “But let it ride a little above 2% and bring the labour markets back to health”.

Powell speaks later today at a university event but there is a Q&A where he is likely to be asked about this week’s tapering talk.  It is expected that Powell will push back on any tapering concerns which should allow the USD downtrend to resume, he is helped making this decision after the strong US auction yesterday.

US headline CPI was slightly stronger than expectations at 1.4% vs 1.3% exp.  CPI ex food and energy came in line at 1.6%. The numbers don’t cause any concern around runaway inflation and US yields have eased off, helped by more dovish Fed speak.

Biden will announce his spending plans in a speech this evening 7:15pm US time.  Funding for vaccines, aid to state and local governments, boosting direct payments to $2,000 from the $600 approved last month and further unemployment-insurance support are likely to be key components.

There has been a bit of a spike in USD in the Asia morning after this headline *BIDEN AIDES TELL CONGRESS ALLIES AID PLAN MAY BE ABOUT $2T:  Expectations were closer to $1tn. The US 10yr yield spiked from below 1.08% to above 1.13% on this.  We seem to be in a situation where more US fiscal stimulus is linked to higher USD, although this morning there may have been an overreaction as the contents of this stimulus package have been well telegraphed.

EURUSD – The US dollar is gaining ground after reports that President-elect Joe Biden is set to announce a $2 trillion stimulus package on Friday, much higher than expectations. An increase in government debt triggered an outflow from bonds to stocks, pushing US Treasury yields higher and making the dollar more attractive. However, if the Fed wants a weaker dollar, then Jerome Powell should mention during his speech today something related to “buying additional US debt” and not mention tapering. If the bulls lose the 1.2140 support today, then we might retest 1.21.

GBPUSD – The pound found support as expected at the 1.3615 level, as the bulls remain cautious amid the US dollar’s rebound after Joe Biden’s $2 trillion stimulus package. The focus shifts towards the Fed Powell’s speech and if he will mention anything related to tapering or not, as the Sterling will remain at the mercy of the dollar trades and sentiment around the Treasury yields. If 1.3615 support holds, then we could easily revisit 1.37 today.

USDJPY – The dollar/ yen is moving in tandem with the US yields after the 10-year dropped to 1.07% yesterday, the pair followed suit and retested 103.60. Today, however, the yields recovered a bit, and the pair is attempting to hold above 104. However, we think the Fed will intervene and push the Dollar lower today, to keep the same agenda going. From a technical perspective, 104-104.30 is a strong resistance level, price will top out here and roll over towards 103.60 once again.

FTSE 100 – Stocks in London are seen opening higher on Thursday following a strong Asian session after China released a record trade surplus for 2020 despite the virus. Moreover, hopes for fresh US financial support under the incoming Biden administration is keeping global equities well supported, despite the unprecedented impeachment of the outgoing US president for a second time. As a result, the FTSE100 will remain strong today with 6800 as a key resistance to breach for further upside.

DOW JONES – The Dow Jones Industrial Average ended flat yesterday and is still trading in a narrow range with technical indicators still favouring higher highs despite the unprecedented impeachment of US president Donald Trump for a second time. Earlier this morning, China's customs administration data showed the country's surplus climbed 7.1% to USD316.9 billion with outbound shipments boosted by sales of electronics goods and protective gear giving a boost to Asian markets which will push global stocks higher today. The Dow's main trend is still up according to the daily chart with a trade through 31150 to signal a resumption of the strong upside momentum ahead of the weekly jobless claims to be released later today.

DAX 30 – Germany confirmed its biggest jump in coronavirus deaths during the past 24 hours at nearly 1,240 people as a result of the illness. The Dax however is still very well supported after hitting our target at €14,000 and is still trading on a long-term uptrend from a technical perspective. While there are no stats on the economic calendar out of Europe today, the ECB Monetary Policy meeting minutes will draw some attention later in the day in addition to the US weekly jobless claims. Ahead of the European session this morning, Asian markets rose after China released a record trade surplus of $535 billion in 2020 despite the virus. The strong Asian finish may push European and US markets higher today. 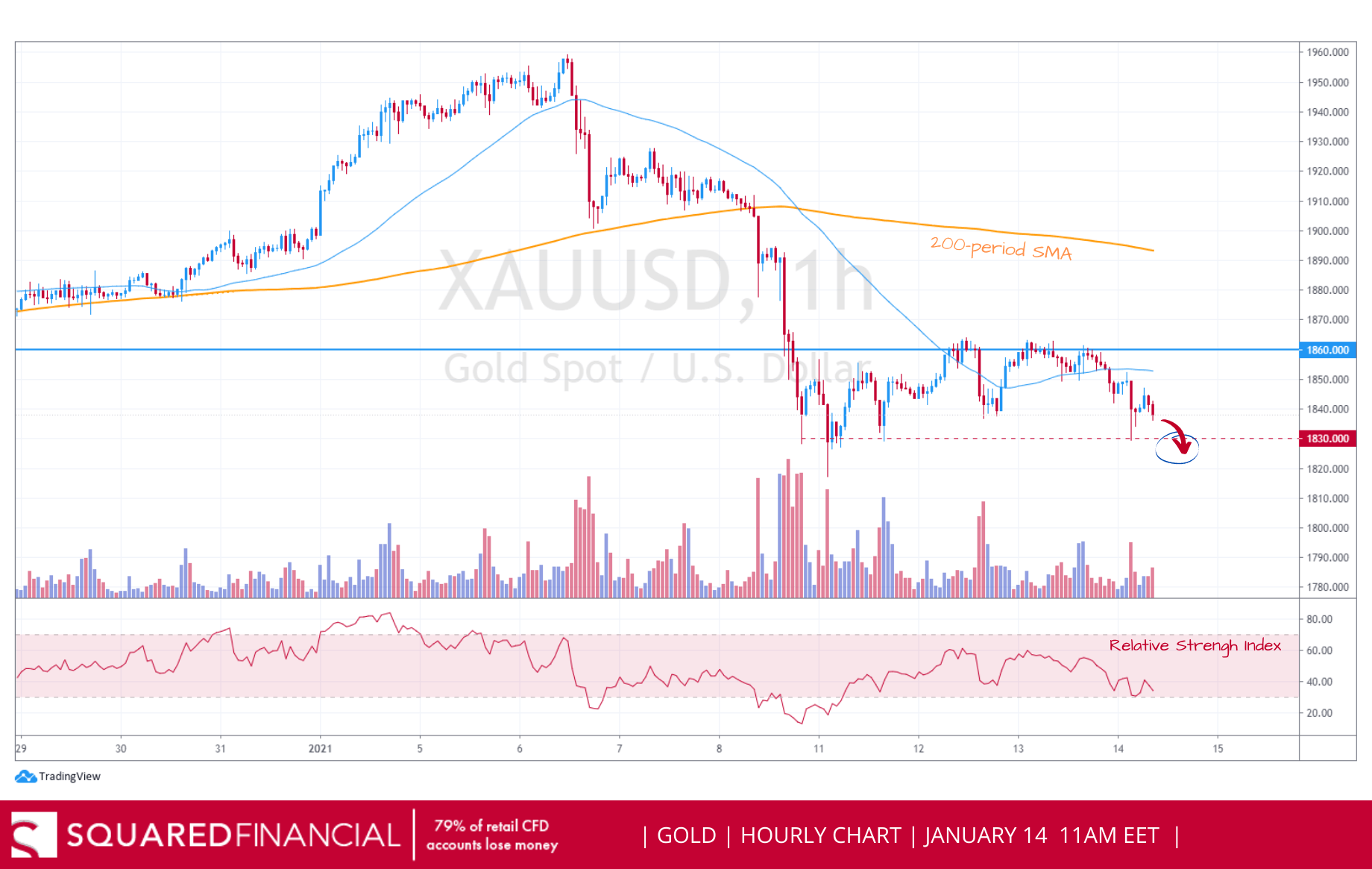 GOLD – Gold prices hit both our short targets at 1850 and 1840 after failing to break the 1860/65 resistance. The US dollar gained traction as the 10-year yield retraced some of its recent gains. US CPI rose in line with expectations while the House of Representatives moved forward with a vote on the second impeachment of President Donald Trump. Gold’s weakness extended further earlier this morning after China showed a record rise in exports for 2020 despite pressure from the coronavirus and a tariff war with Washington. The downside bias in the short-to-medium term remains intact, especially after the price confirmed a rising channel breakdown on the hourly chart as US Treasury yields and the dollar continue to rise on prospects of a bigger-than-expected fiscal stimulus plan likely to be announced by President-elect Joe Biden on Friday. 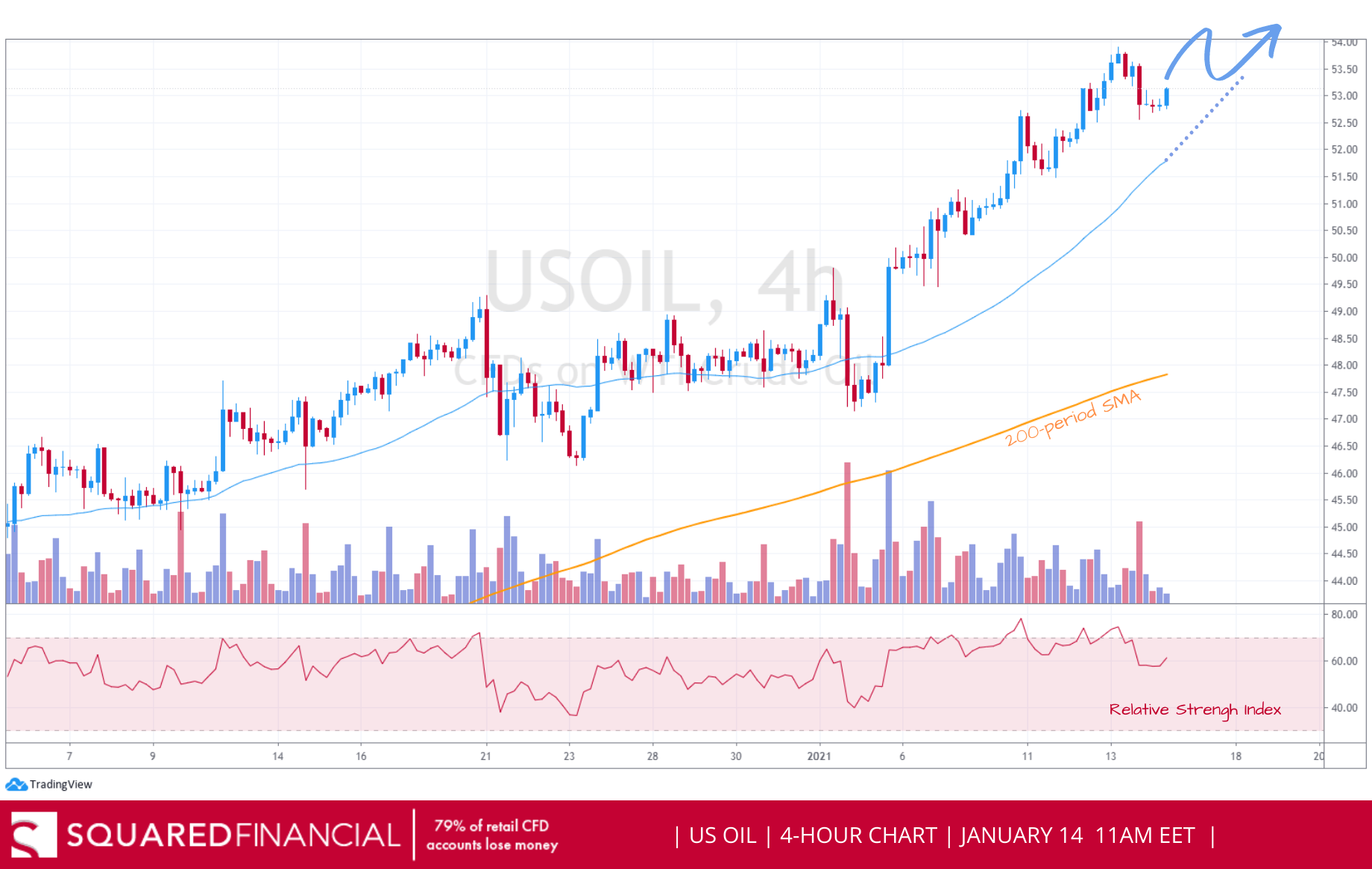