Emerging economies have faced mounting inflation pressures since the beginning of 2021. Headline inflation has continued to accelerate over the summer (except in Asia), primarily reflecting the rise in food and energy prices and weaker currencies against the USD. However, core inflation has also accelerated across the board. As a result, a growing number of central banks in Latin America and Central Europe have started to raise their policy rates. In Asia, inflation has remained low (North Asia) or has levelled off (India), allowing central banks to stay accommodative. So far, central banks engaged in a tightening cycle have increased their policy rate cautiously; even the more reactive ones (in countries such as Brazil and Russia) have remained behind the curve (i.e. the real policy rate is still negative or the central bank has not raised its policy rate as much as the acceleration in inflation).

Whether the increase in inflation is transitory or may become permanent is an open question. On the one hand, the impact of the strong recovery in oil prices is expected to subside with the scheduled increase in OPEC+ production quotas and assuming that global supply-chain disruptions fade rapidly. On the other hand, however, there is a risk of persisting price pressures in case of a lagged pass-through from higher food and energy prices to headline inflation, if supply bottlenecks take time to wane and induce supply-demand mismatches, and/or if nominal wages catch up rapidly with prices, entailing the potential de-anchoring of inflation expectations. Persistently high inflation could pose a downside risk to the economic growth outlook in emerging countries. Moreover, food price increases have been higher in countries where food insecurity is more prevalent, putting poorer households under greater stress and fueling a risk of social unrest. 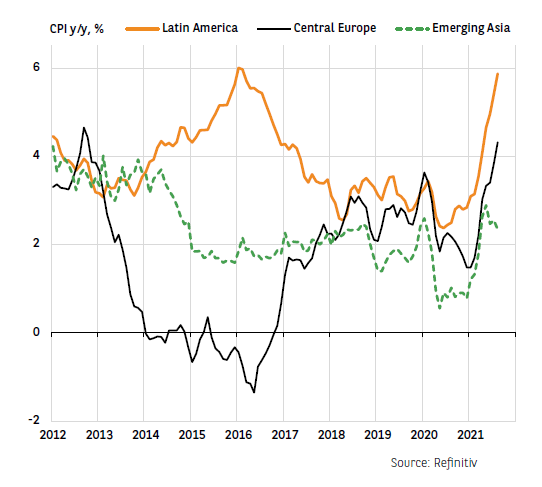