Americans are seeing the fastest price increases since their seventh-graders were born as inflation builds into the US economy from the disruptions of the pandemic lockdowns.

Consumer prices in May rose 5% from a year earlier, the highest rate in 13 years, reported the US Labor Department on Thursday. Core inflation, which excludes food and energy costs, climbed 3.8%, its fastest annual increase since May 1992. Consensus forecasts in the Reuters survey were for increases of 5% and 3.4%.

Price gains were distributed unevenly across the spectrum of consumer goods led by 7.3% monthly and 29.7% annual gains for used cars and trucks. New car prices rose 1.6% last month, their biggest increase since October 2009 and are up 3.3% in 12 months.

The Federal Reserve has been preparing for this surge in prices since last year when the FOMC adopted inflation-averaging as their measurement standard. The chief reason was so that rate policy would not be stampeded by price increases, however great, that the board expected to be temporary.

Chair Jerome Powell and the other governors believe the ramp in prices this year is due to the collapse of the Consumer Price Index (CPI) in the March and April lockdowns last year.  When normal economic activity resumed it was inevitable that the comparison would raise the index and produce exaggerated inflation rates.

The surge in inflation has already begun to diminish. From February to March annual CPI rose 0.9%, from March to April the gain was 1.6%, but from April to May it dropped by half to 0.8%.

Likewise, the Fed expects the product, material and labor shortages that are pressuring prices, will gradually end as the US and global economies normalize with the end of the pandemic.

The Fed has tied its rate policy to a complete recovery in the labor market.

Until the dismal and unexpected April Nonfarm Payrolls of 278,000 on May 7, barely a quarter of the forecast, markets had assumed a change in policy was imminent.  Inflation had added to that anticipation.

The rate policy engame has not changed but the timing is now completely undetermined.

Markets key their reaction to economic statistics and particularly to inflation by what traders think the Fed will do.

In this case the governors have stated many times that they will do nothing in response to the current inflation numbers.

Treasury yields have risen dramatically this year on the anticipation that the rapidly improving US economy will permit the Fed to begin phasing out its enormous pandemic relief purchases of $120 billion month in government and mortgage securities.

It is this intervention that has pinned the short side of the yield curve, while the longer term rates have risen. The 2-year opened the year at 0.125%, to date it has added three points to 0.153%.

Inflation will probably course higher than the Fed admits once the base effect subsides, because prices are being driven by factors that will quickly imbed in the overall cost structure.

Labor markets in the US have been distorted by the extension of federal unemployment benefits. Those additional payments run to the end of September. The Job Openings and Turnover Survey (JOLTS), which tracks the number of unfilled positions, rose to a record 9.3 million in April.

With hiring desultory in April and disappointing in May in light of the number of positions open, employers are offering signing bonuses and higher wages in an effort to find workers. These increases will become permanent very quickly, raising wage scales for many industries.  It is nearly impossible for one firm to lower compensation in a tight labor market when other companies pay at higher rates.

Commodities are another substantial component of inflation. The Bloomberg Commodity Index (BCOM) is up 21.7% since the close on December 31. It is 57.7% higher than the pandemic bottom on April 24, 2020.

Oil is the modern economy’s most important industrial commodity. Fossil fuels are the chief energy source for the vast majority of industrial, agricultural and consumer production.

Oil prices transfer directly and immediately to the consumer through the widespread and increasing global use of automobiles.  In the US the nationwide average for a gallon of regular gasoline was $2.93 on June 7,  36.1%  higher than its price on December 28 last year.

Commodity prices are highly dependent on depend and that looks to be strong at least through the end of the year. 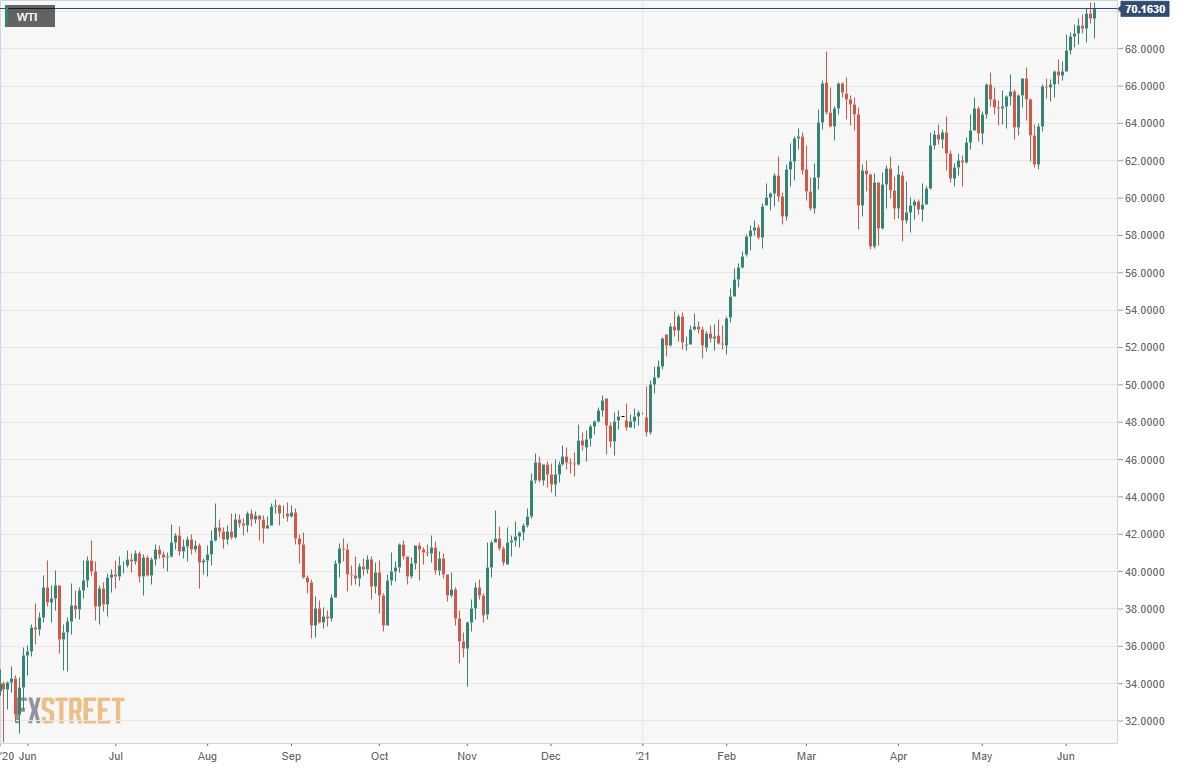 Oil prices are under increasing  pressure because the US has pulled back from its role as swing producer to the global market. With less prospect of higher production from US shale drillers, OPEC and other legacy producers have revived market sway.

Finally, the lockdowns, last year and for many countries this year as well, have left a huge backlog of orders in many crucial components and raw materials. The shortage of computer chips is global and has inhibited manufacturing for many consumer products. In the automobile industry  it has curtailed or halted production of many new vehicles, sending prices of used cars in the US soaring. Pricing power has returned to many manufacturers and retailers.

The labor and product shortages will eventually ease but price gains will be permanently incorporated in the overall inflation rate.  Gains in wages are likely to bring on a second round of price pressures as those employer costs are transferred to the consumer.

Inflation will be the key statistic in the Fed’s second set of Projections Materials due at the June meeting.

In the last projections from March, the Personal Consumption Price Index was expected to be 2.4% at the end of 2021, with the core rate at 2.2%. Those will rise, the question is how much?  There will be no change in the 0.1% fed funds projection for the end of this year, but that will not matter. Markets will focus solely on the inflation projections, the higher they are, the more certain will be the yield gain in Treasuries. 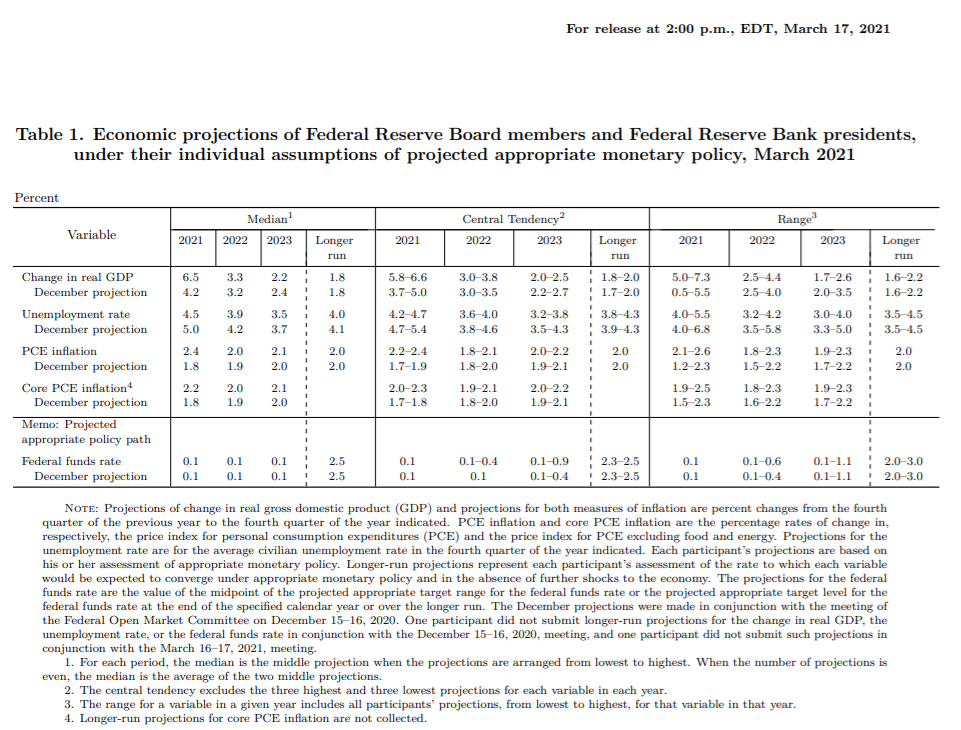 Markets are in the anomalous position of knowing the Fed's rate endgame but being in the dark about timing.

Interest rates in the US are going higher.  Although the Fed is correct that the bulk of the inflation increases this year stem from the statistical base effect, that is not the whole story.

Steep increases in commodity prices, especially for oil the premier industrial raw material, wages and shortages in components, raw materials and many consumer products will keep prices on the upswing for many months.

In addition, it is very likely that wage gains are permanent. Labor costs are the largest item in the overhead of most businesses, large and small, and are the most certain to be passed on to the consumer. The longer the government induced labor shortage continues the more wages will rise and the more ingrained they will become for the price structure.

Surprisingly, average US CPI inflation for the twelve months through May is already 1.92%.  As last year’s pandemic months roll off the CPI average and are replaced with the far higher current rates, the CPI average will rise dramatically.

Inflation averaging or not, prices have become the crux of Fed policy.