Chart of the Day: Aramco's biggest bear is Morgan Stanley. Of the banks tracked by Bloomberg that started coverage, two recommend buying, six have hold ratings and four say sell. The average price target is 32.75 riyals, a 5.6% drop from current levels. Morgan Stanley's is 28.10 riyals to go with its underperform rating, while Goldman has the highest, 41 riyals, and a neutral rating. 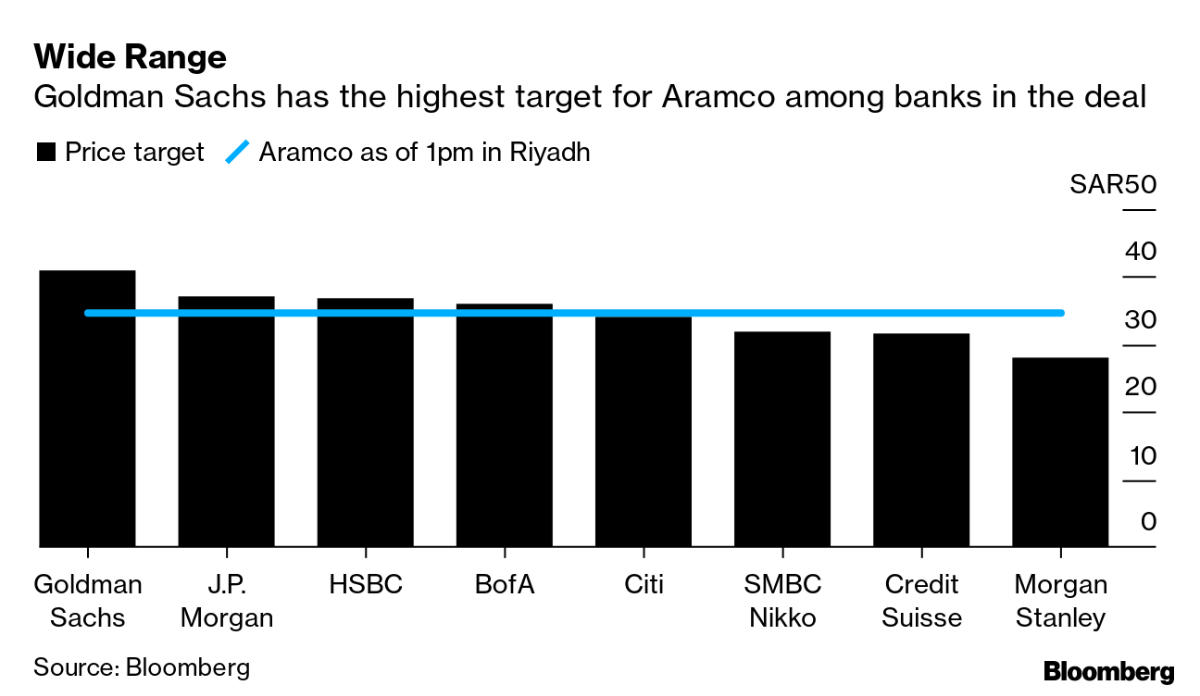 President Trump will sign a trade deal today that he recently called a "big, beautiful monster." It will punish China if the country breaks pledges on the yuan and intellectual property. The U.S. will cut duties on $120 billion of imports and delay others in return for structural reforms and purchases of $200 billion more of U.S. goods. But tariffs on two-thirds of imports will stay until at least November and more relief will only come if there's a phase two deal.

Bernie Sanders and Elizabeth Warren locked horns during the Democratic debate, sparring about elitism, sexism and insinuations of lying. Both held to their stories about what happened in 2018. Sanders denied reports he told Warren a woman couldn't win the White House. Warren said she disagreed. The six contenders argued for a reduced U.S. role in the Middle East. Here are our top takeaways.

Impeachment latest: Nancy Pelosi will name prosecutors today, the House will vote on them and formally send the articles to the Senate. House investigators released new evidence from Lev Parnas, an associate of Rudy Giuliani, including documents suggesting ousted ambassador to Ukraine Marie Yovanovitch had been under surveillance there. Follow along with our Impeachment Update.

U.S. equity futures fell with Asian and European stocks amid concern the trade deal won't ease tensions between China and America. Treasuries rose with gold and the yen, while the dollar slipped. Oil edged down after a report indicated U.S. crude stockpiles increased.