Following the previous week’s decline, gold staged a rebound and closed in the positive territory on Monday and Tuesday. After reaching its strongest level since last Thursday’s sharp decline at $1,787 on Wednesday, however, the XAU/USD pair lost its traction as the greenback gathered strength on the back of the hawkish FOMC policy outlook. Rising US Treasury bond yields caused the bearish pressure to increase in the second half of the week and the pair slumped to a multi-week low of $1,7137 on Thursday before staging a technical rebound and closing near $1,750 on Friday.

At the start of the week, concerns over the Evergrande crisis turning into a global turmoil caused market participants to seek refuge in safe-haven assets. Although the USD outperformed its risk-sensitive rivals, gold didn’t have a difficult time finding demand either. Reflecting the intense flight to safety, the S&P 500 Index opened with a large bearish gap and lost 1.7% on Monday.

In the absence of high-impact data releases, markets remained relatively calm on Tuesday and investors stayed on the sidelines. During the Asian trading hours on Wednesday, the People's Bank of China announced that it left the 1-year and 5-year LPRs at 3.85% and 4.65%, respectively, as expected. However, the PBoC also decided to inject around 110 billion Chinese yuan of short-term cash and helped market mood improve.

With risk flows returning to markets, the USD remained on the back foot on Wednesday and allowed XAU/USD to extend its recovery. Nevertheless, the FOMC’s policy announcements in the second half of the day provided a boost to the greenback and forced gold to turn south.

The FOMC left the benchmark interest rate, the target range for federal funds, unchanged at 0%-0.25% as widely expected following the September policy meeting. In its policy statement, the Fed noted that if progress continues toward employment and inflation goals broadly as expected, a moderation in the pace of asset purchases may soon be warranted. The fact that the publication failed to deliver a tapering timeline caused the USD to weaken with the initial reaction. However, the updated Summary of Projections revealed that the number of policymakers who see a rate hike in 2022 rose to 9 from 7 in June.

More importantly, FOMC Chairman Jerome Powell clarified that the language in the statement meant to flag the bar for taper could be met as soon as the next meeting. Additionally, Powell said that they are planning to conclude the taper around mid-year 2022. While commenting on the disappointing August jobs report, the chairman noted that the weak Nonfarm Payrolls reading was caused by the sudden spike seen in coronavirus Delta cases and added that they do not need a very strong September jobs report to go ahead with the taper.

Supported by the hawkish policy outlook, the US Dollar Index (DXY) climbed to a monthly high on Wednesday and XAU/USD snapped a three-day winning streak.

On Thursday, the impressive upsurge witnessed in US Treasury bond yields weighed heavily on gold and XAU/USD extended its slide to a fresh 5-week low of $1,737.84. In the meantime, the US Department of Labor’s weekly publication showed that the Initial Jobless Claims rose to 351,000 from 335,000. On the last trading day of the week, gold made a technical correction toward $1,750.

On Monday, August Durable Goods Orders will be featured in the US economic docket but this data by itself is unlikely to trigger a significant market reaction. On Tuesday, the Conference Board will release the Consumer Confidence data for September.

On Thursday, the US Bureau of Economic Analysis will publish the final estimate of the second-quarter Gross Domestic Product (GDP) growth alongside the US Department of Labor's weekly Initial Jobless Claims report.

The Core Personal Consumption Expenditures (PCE) Price Index, the Fed's preferred gauge of inflation, will be looked upon for fresh impetus on Friday ahead of the ISM Manufacturing PMI and the UoM's Consumer Sentiment Index data.

Meanwhile, investors will keep a close eye on the US T-bond yields' movements and the general risk sentiment. 1.5% aligns as key resistance for the benchmark 10-year US T-bond yield and a break above that level could trigger a rally and pave the way for another leg lower in gold prices. 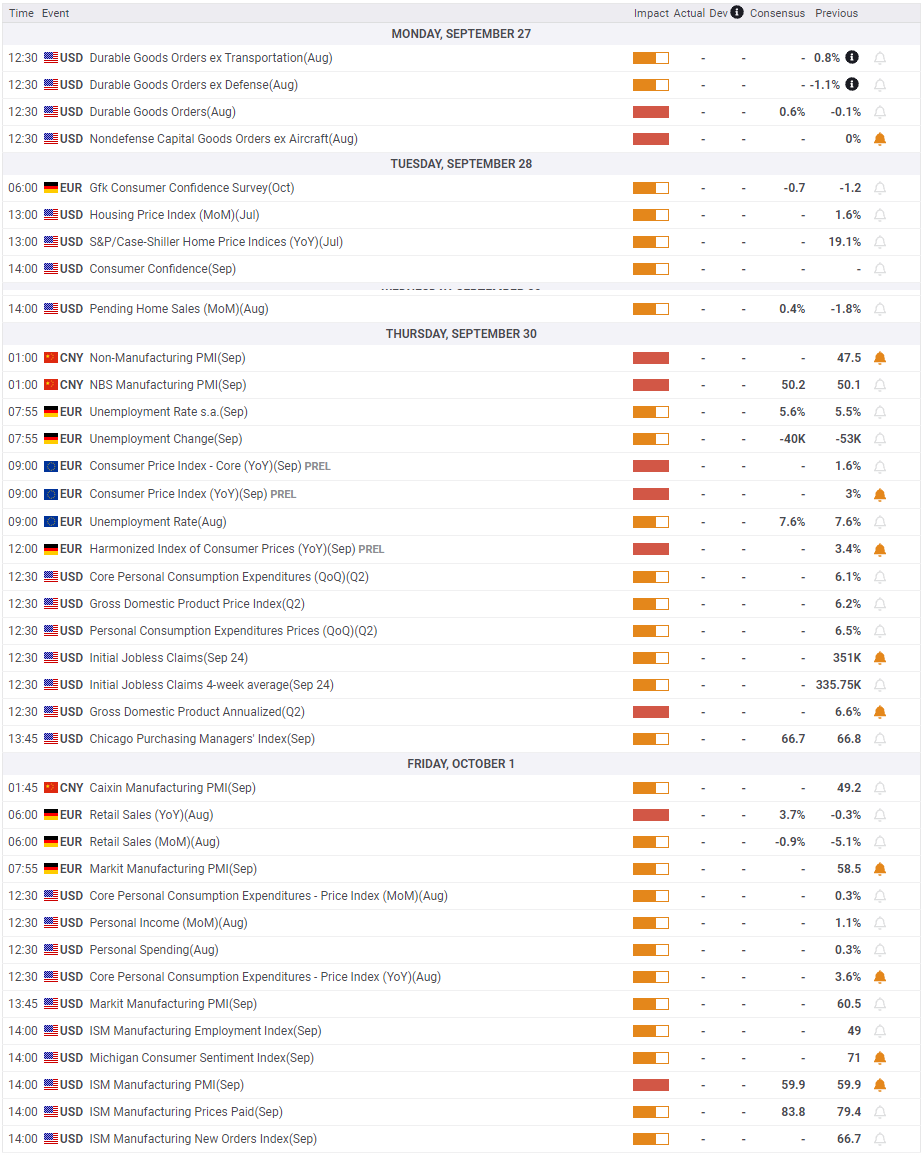 Despite Friday's rebound, the Relative Strength Index (RSI) indicator on the daily chart stays near 40, suggesting that the bearish bias remains intact. On the downside, static support seems to have formed at $1,740 ahead of $1,730 and $1,720.

The FXStreet Forecast poll points to a clear bearish shift in gold's outlook. Following this week's action, the average price on the one-week view declined to $1,728 from $1,750 previously. More importantly, 70% of experts expect gold to push lower. Similarly, the average target on the one-month and the one-quarter views stand at $1,708 and $1,714 respectively. 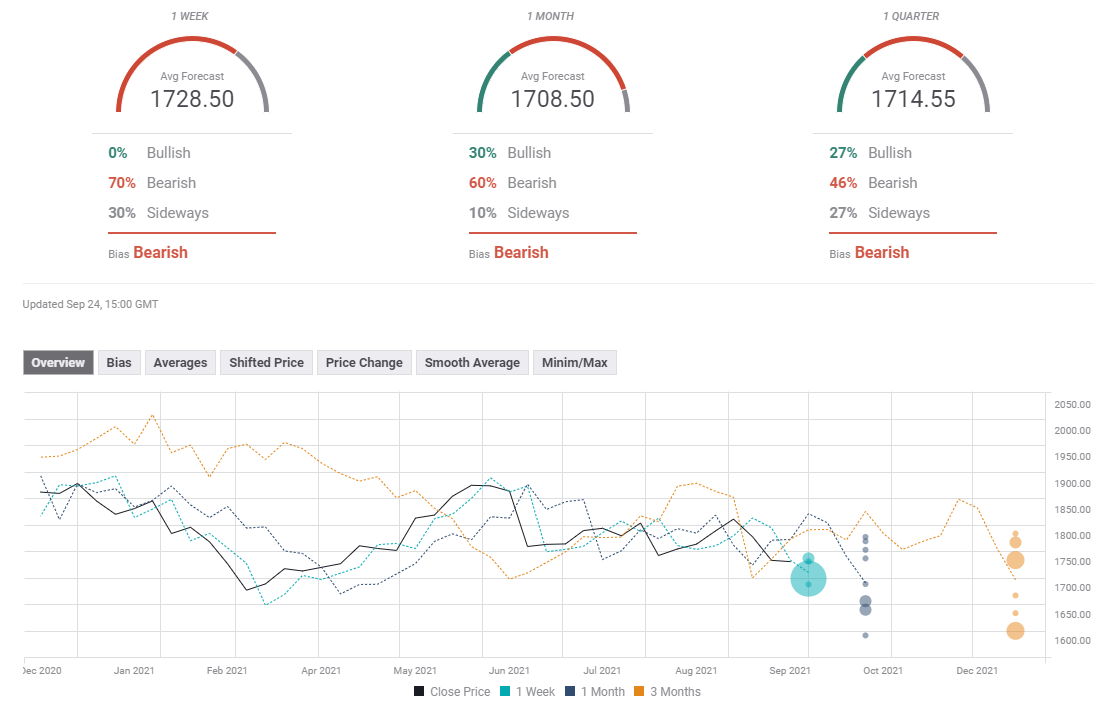