After gaining nearly 2% in the previous week, the XAU/USD pair stayed relatively quiet on Monday and Tuesday, fluctuating in a narrow band around $1,780. With the benchmark 10-year US Treasury bond yield continuing to edge lower, however, gold advanced to its highest level since late February at $1,797 in the second half of the week. On Friday, the pair lost its traction and erased its weekly gains to close flat around $1,780.

In the absence of high-tier macroeconomic data releases, XAU/USD continued to react to fluctuations in the US T-bond yields.

The data published by the US Department of Labor revealed on Thursday that the weekly Initial Jobless Claims declined to the lowest level in more than a year at 547,000, compared to analysts’ estimate of 617,000. Additionally, the Federal Reserve Bank of Chicago’s National Activity Index improved to 1.71 in March from -1.2 in February. These figures were largely ignored by market participants.

Several news outlets reported on Thursday that US President Joe Biden was planning to propose an increase in capital gains tax to pay for a major spending plan for families that will be announced next week. This headline weighed heavily on Wall Street’s main indexes and allowed the greenback to find demand, causing XAU/USD to pull away from its multi-week highs.

On Friday, the IHS Markit’s preliminary data for April showed that the economic activity in the US private sector continued to expand at an impressive pace with the Composite PMI reaching a new record high of 60.6. However, the underlying details of the report revived concerns over high inflation and set off a rebound in yields, dragging gold lower ahead of the weekend. "Unprecedented supply chain disruptions pushed input costs higher once again in April," the publication read. “The pace of output price inflation for goods and services accelerated to a series high."

In other developments, the European Central Bank (ECB) left the interest rates on the main refinancing operations, the marginal lending facility and the deposit facility unchanged at 0.00%, 0.25% and -0.50%, respectively. The bank refrained from making any changes to its Pandemic Emergency Purchase Programme (PEPP) and kept the total envelope steady at €1.85 billion until at least the end of March 2022.

Meanwhile, the Bank of Canada (BoC) reduced its weekly net purchases of Canada's government bonds to a target of C$3 billion from C$4 billion. The BoC further noted that current projections point to a rate hike in the second half of 2022, becoming the first major central bank to deliver forward guidance on policy tightening.

March Durable Goods Orders will be the first significant data of the week from the US on Monday. On Tuesday, the Conference Board (CB) will publish the Consumer Confidence report for April. Although these releases have the potential to trigger short-term market reactions, investors are likely to stay on the sidelines ahead of the highly-anticipated first-quarter GDP and inflation reading from the US on Thursday and Friday.

The US Bureau of Economic Analysis’s first estimate is expected to show an expansion of 6.3% in the economic activity. A stronger-than-anticipated reading would provide a boost to the greenback and force XAU/USD to edge lower.

More importantly, market participants will pay close attention to the Core Personal Consumption Expenditures (PCE) Price Index, the Federal Reserve’s preferred gauge of inflation, on Friday. Earlier in the month, the Consumer Price Index (CPI) data eased fears over price pressures becoming uncontrollable in the near term and caused US Treasury bond yields to push lower. A similar market assessment could fuel a rally in XAU/USD and open the door for a retest of $1,800. On the other hand, with Friday’s PMI report reminding how sensitive yields are to rising inflation expectations, a big increase in PCE Price Index might hurt the precious metal on the last trading day of the week. 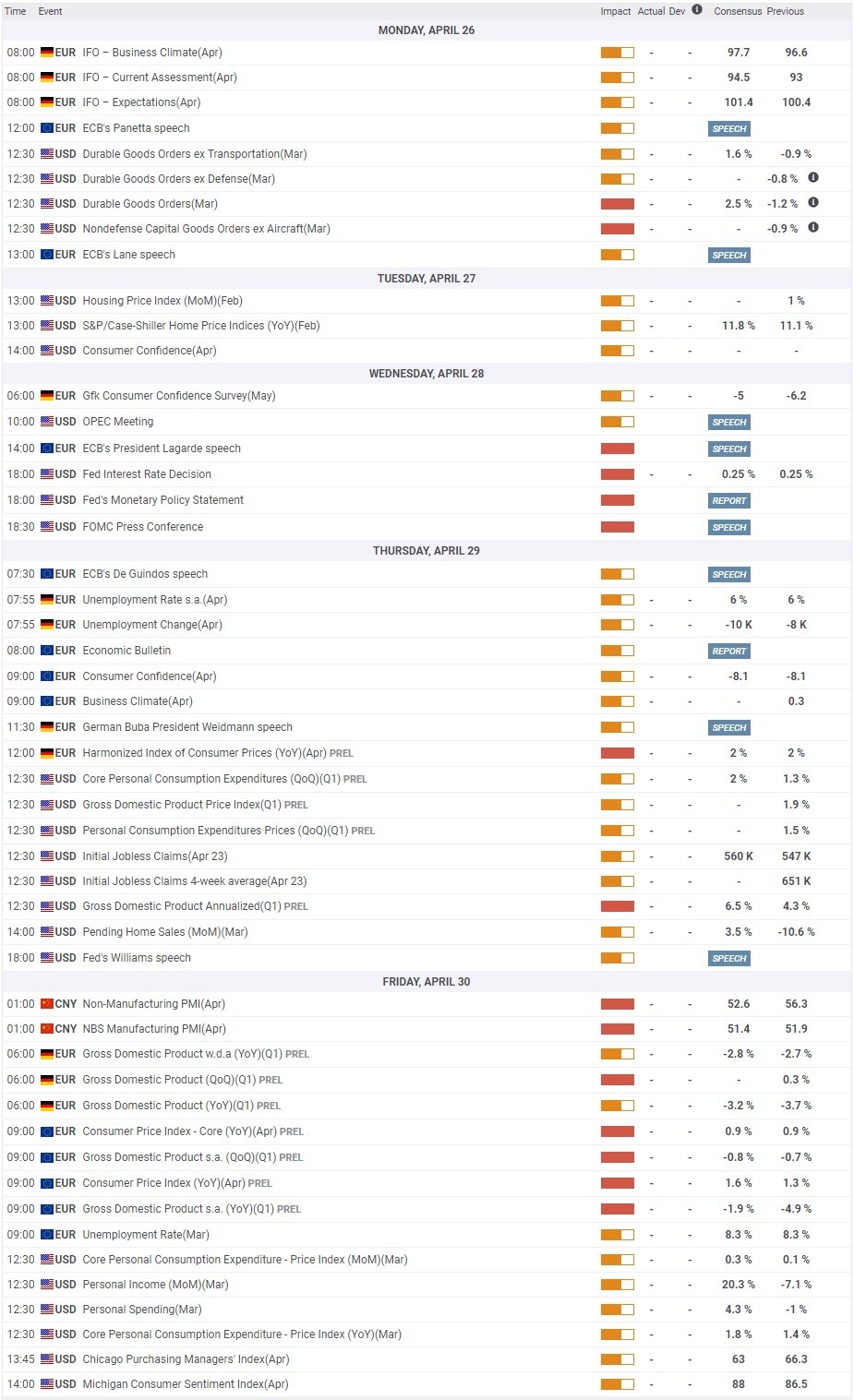 On the daily chart, the Relative Strength Index (RSI) indicator stays above 50 despite a modest decline seen in the second half of the week, suggesting that the near-term outlook remains neutral with a slight bullish bias.

On the upside, the initial resistance is located at $1,785 (Fibonacci 38.2% retracement of the January-March downtrend) ahead of $1,800 (psychological level/100-day SMA). A daily close above the latter could attract buyers and lift gold toward $1,820 (Fibonacci 50% retracement).

The FXStreet Forecast Poll shows that experts are split evenly between bullish and bearish in the short-term with the average price target on a one-week view aligning a little above the current price at $1,783. On a one-month view, gold is seen trading above $1,800. 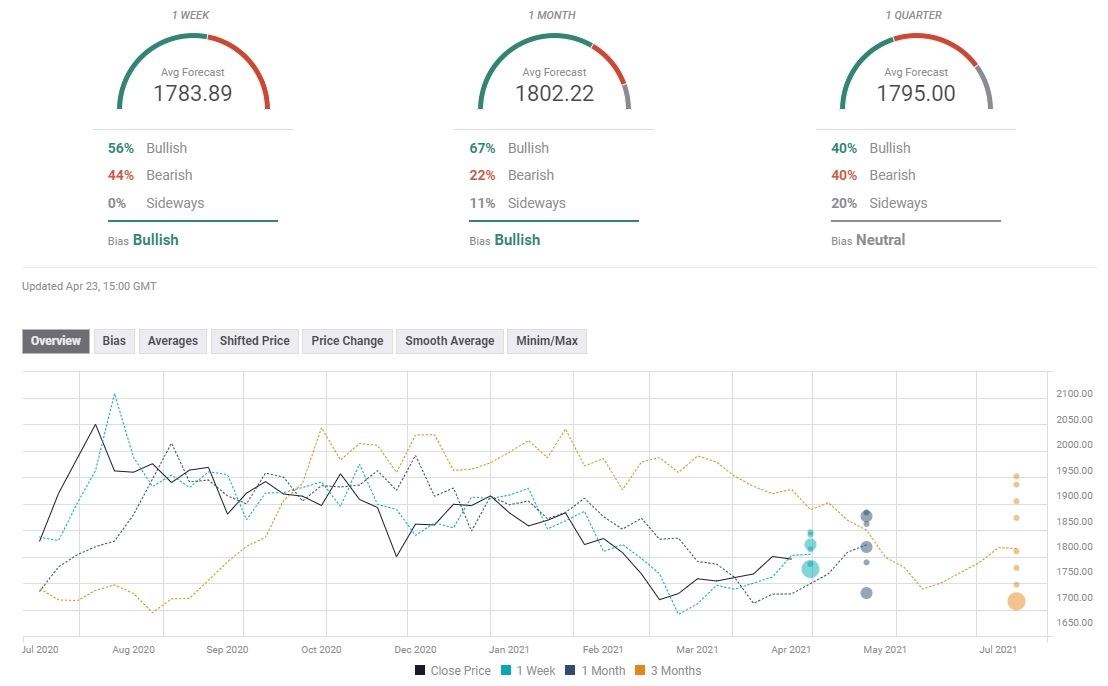 EUR/USD depressed near a fresh weekly low at 1.2065

EUR/USD lost the 1.2100 mark with US inflation data, holding near its daily lows as demand for high-yielding assets receded. The greenback has room to continue rallying.

GBP/USD has  extended its decline after US CPI beat estimates with 4.2% while Core CPI came out at 3%. Earlier, UK GDP beat expectations with -1.5%. Volatility is rising.

XAU/USD tests $1,820 as USD capitalizes on US CPI data

The XAU/USD pair fluctuated wildly in the early American session as investors assessed the latest inflation report from the US. After spiking to a daily high of $1,843, the pair reversed its direction and dropped to $1,820 area.