The XAU/USD pair struggled to find direction at the start of the week amid a lack of high-tier macroeconomic data releases and significant fundamental drivers. However, the pair regained its traction on Tuesday and kickstarted a technical rally following a break above $1,900. Although gold managed to preserve its bullish momentum on Wednesday, it reversed its direction after renewing its highest level since early January at $1,912. Supported by week-end flows on Friday, the pair steadied around $1,900 and closed the fourth straight week in the positive territory.

In the absence of noteworthy data releases on Monday, market participants paid close attention to Fedspeak. Federal Reserve Governor Lael Brainard reiterated that the Fed has the tools to guide inflation back down if it were to move persistently above the Fed’s target. Regarding the policy outlook, “there will come a time when we can talk more about changing monetary policy but it's not the time while we are still in a pandemic,” St. Louis Fed President James Bullard told Yahoo Finance. Additionally, Kansas City Fed President Esther George urged policymakers to not dismiss the risk of higher inflation. These comments failed to trigger a consistent market reaction and gold fluctuated in a relatively tight range.

On Tuesday, Wall Street’s main indexes opened sharply higher and the S&P 500 Index gained nearly 1%, causing US Treasury bond yields to push lower. With the benchmark 10-year US T-bond yield losing 2.7% on a daily basis, gold gathered strength. Moreover, the technical buying pressure ramped after the price advanced beyond $1,900 and gold reached its highest level since January 8 at $1,912 during the European trading hours on Wednesday. Nevertheless, the modest rebound witnessed in the US T-bond yields later in the day forced XAU/USD to turn south and close below $1,900.

The US Bureau of Economic Analysis (BEA) announced on Thursday that it left the annualized Real Gross Domestic Product (GDP) growth for the first quarter unchanged at 6.4% in its second estimate. Other data from the US revealed that the weekly Initial Jobless Claims fell to the lowest level in more than a year at 406,000. On a negative note, the US Census Bureau reported that Durable Goods Orders declined by 1.3% in April, compared to analysts’ estimate for an increase of 0.7%. These mixed figures were largely ignored by market participants and the 10-year US T-bond yield extended its recovery, bringing about a negative daily close for the second straight day for XAU/USD.

Finally, the BEA said on Friday that the Core Personal Consumption Expenditures (PCE) Price Index jumped to 3.1% on a yearly basis in April from 1.9% in March. The US Dollar Index climbed to its strongest level in more than ten days at 90.44 with the initial reaction but lost its momentum, allowing gold to erase its daily losses.

There will not be any macroeconomic data releases that could potentially impact gold prices on Monday and the US markets will be closed due to the Memorial Day holiday. On Tuesday, the Consumer Price Index (CPI) data from the euro area and the ISM Manufacturing PMI from the US will be looked upon for fresh impetus. A soft inflation reading from the EU is likely to help the USD outperform its rivals as it would suggest that the European Central Bank is unlikely to consider a hawkish shift in its policy in the absence of price pressures.

On Wednesday, investors will look for fresh clues regarding the inflation outlook in the Fed’s Beige Book. In case the publication points out to increasing input prices due to supply constraints and ongoing labour demand issues, gold could push lower amid rising US T-bond yields and vice versa. On Thursday, the Automatic Data Processing (ADP) Research Institute’s private sector employment report will be featured in the US economic docket.

Ahead of the weekend, the US Bureau of Labor Statistics will release the highly-anticipated May jobs report. The market consensus points to an increase of 621,000 in Nonfarm Payrolls (NFP). Earlier in the month, April data showed NFP rose by 266,000, missing analysts’ estimate of 978,000 by a wide margin, and triggered a heavy USD selloff. Similarly, a positive surprise could provide a boost to the greenback while a disappointing print is likely to allow XAU/USD to regain bullish momentum.

On the daily chart, the Relative Strength Index (RSI) indicator continues to float above 70, suggesting gold is still technically overbought. Nevertheless, as long as buyers continue to defend $1,900, additional gains could be in the books. Moreover, the price continues to trade above the ascending line coming from March 31. The initial resistance is located at $1,912 (May 26 high) ahead of $1,930 (static level) and $1,953 (Jan. 5 high).

On the flip side, $1,900 (psychological level) aligns as the first support before $1,870 (static level, ascending line). A daily close below the latter could attract sellers and cause gold to retreat toward the 200-day SMA, which is currently located around $1,845.

The FXStreet Forecast Poll shows that experts see gold edging modestly higher next week with an average target of $1,909. On the one-month view, however, the outlook turns bearish and the majority of experts see gold staging a deep correction toward the end of the second quarter. 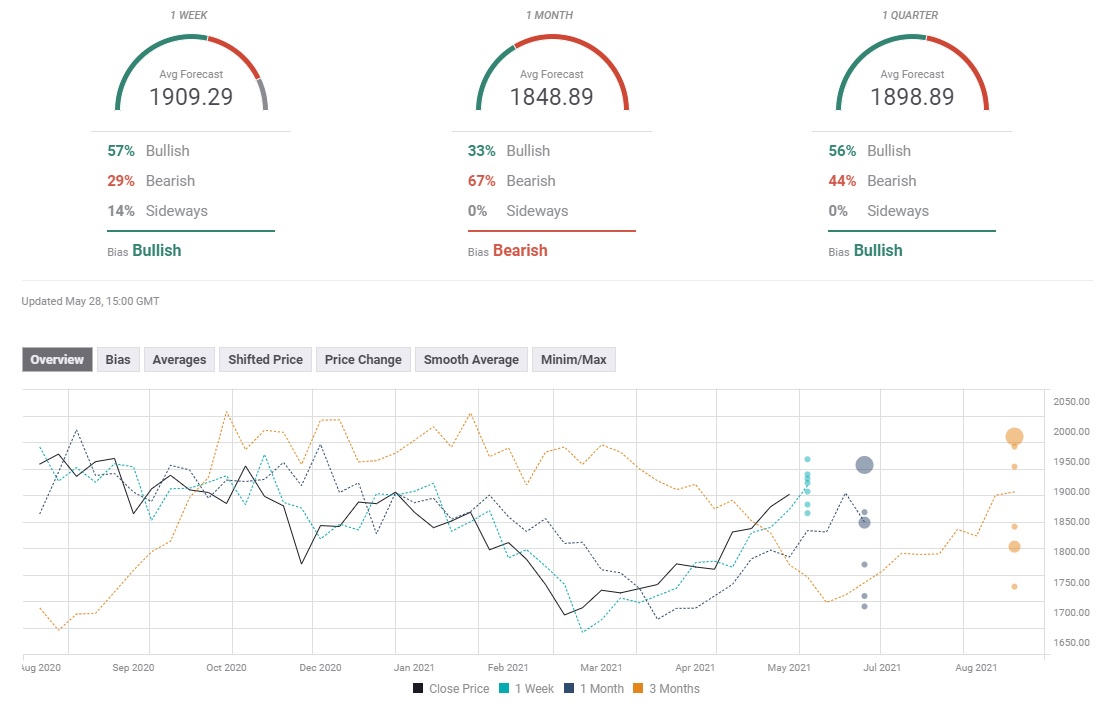 EUR/USD seesaws after rising the most in two weeks. EUR/USD grinds higher around the weekly top following the biggest daily jump in a fortnight, taking rounds to 1.1350-40 during the early Asian session on Thursday.

GBP/USD fades corrective pullback from 2021 bottom, down for third consecutive day. GBP/USD hovers around 1.3200 following a failed attempt to bounce off the 2021 bottom, marked the previous day, during the initial Asian session on Thursday.

Gold struggles around $1,785 as sentiment sours