Following the sharp drop witnessed on Friday, gold started the new week in a calm manner but didn’t have a hard time capitalizing on the selling pressure surrounding the greenback. After posting impressive gains on Wednesday, XAU/USD stayed in a consolidation phase on Thursday and continued to edge higher ahead of the weekend. By surging beyond $1,800 on Friday, gold attracted buyers but erased a large part of its daily advance in a quick manner in the late American session to end the week in the positive territory above $1,790.

Disappointing growth data from China caused the market mood to sour at the start of the week and provided a boost to the dollar. However, the upbeat earnings figures from large US banks on Monday helped Wall Street’s main indexes gain traction and allowed risk flows to dominate the financial markets, limiting XAU/USD’s losses.

In the absence of high-tier macroeconomic data releases, risk perception remained the primary driver of financial markets on Tuesday. Although the XAU/USD climbed above $1,780 on broad-based USD weakness – rising US Treasury bond yields forced the pair to pare its gains.

As the rally in US stocks picked up steam mid-week, gold gathered bullish momentum and climbed to fresh weekly highs above $1,790. The data from the US on Thursday, showed that the weekly Initial Jobless Claims fell to the lowest level since March 2020 at 290,000 and the S&P 500 Index notched a new record high of 4,551.

Towards the end of the week the benchmark 10-year US Treasury bond yield pushed higher, but, despite this, the dollar struggled to find demand as a safe haven. Heightened optimism for US lawmakers reaching a deal on US President Joe Biden's spending bill and news of Chinese real-estate giant Evergrande making a payment of $83.5 million on bond interest lifted market mood as the week wound to a close.

Ahead of the Federal Reserve’s blackout period, which will start on October 23, several policymakers voiced their support for tapering to start as early as November, but market participants paid little or no interest to these comments. Cleveland Fed President Loretta Mester and Fed Governor Randal Quarles both said that the test for taper has been met, while Fed Governor Christopher Waller argued that they may have to act faster if inflation remains too high.

Assisted by the sharp correction in the US T-bond yields and the renewed dollar weakness on Friday, XAU/USD broke above $1,800 and touched its highest level since early September at $1,813. Profit-taking ahead of the weekend and FOMC Chairman Jerome Powell's hawkish comments, however, caused the pair to retrace its rally in the late American session. Powell noted that they were expecting high inflation to last well into the next year and added that it was time to taper.

September New Home Sales and the Conference Board’s October Consumer Confidence Index data will be featured in the US economic docket on Tuesday. The market reaction is likely to remain muted with investors staying on the sidelines ahead of key events.

On Thursday, the European Central Bank (ECB) will announce its Interest Rate Decision and release the Monetary Policy Decision Statement. Throughout last week, ECB officials reiterated that the inflation spike in the euro area was expected to be temporary and noted that they would maintain the expansionary policy even after the Pandemic Emergency Purchase Programme (PEPP) ends in March. Moreover, Bundesbank President Jens Weidmann, a loud critic of the ECB’s dovish policy, has announced his resignation at the end of the year. In case the ECB event highlights the policy divergence with the Fed, the greenback could regather its strength and bring forth XAU/USD weakness.

More importantly, the US Bureau of Economic Analysis will release its first estimate of third-quarter Gross Domestic Product (GDP) growth. On a yearly basis, the GDP is expected to expand by 3.2% following the 6.7% growth recorded in the second quarter. Considering how the disappointing September Nonfarm Payrolls data failed to alter tapering prospects, a GDP reading near the market consensus could trigger another leg higher in US T-bond yields. The benchmark 10-year US T-bond yield stays within a touching distance of the critical 1.75% mark and a break above that level could open the door for additional dollar strength. On the other hand, a big miss could cause investors to price in a delay in the reduction of the Fed’s asset purchases and weigh heavily on the dollar.

Finally, the Personal Consumption Expenditures (PCE) Price Index, the Fed’s preferred gauge of inflation, will be the last data release of the week to watch on Friday. However, this data by itself is unlikely to have a significant impact on XAU/USD if the trend is already set by the preceding events. 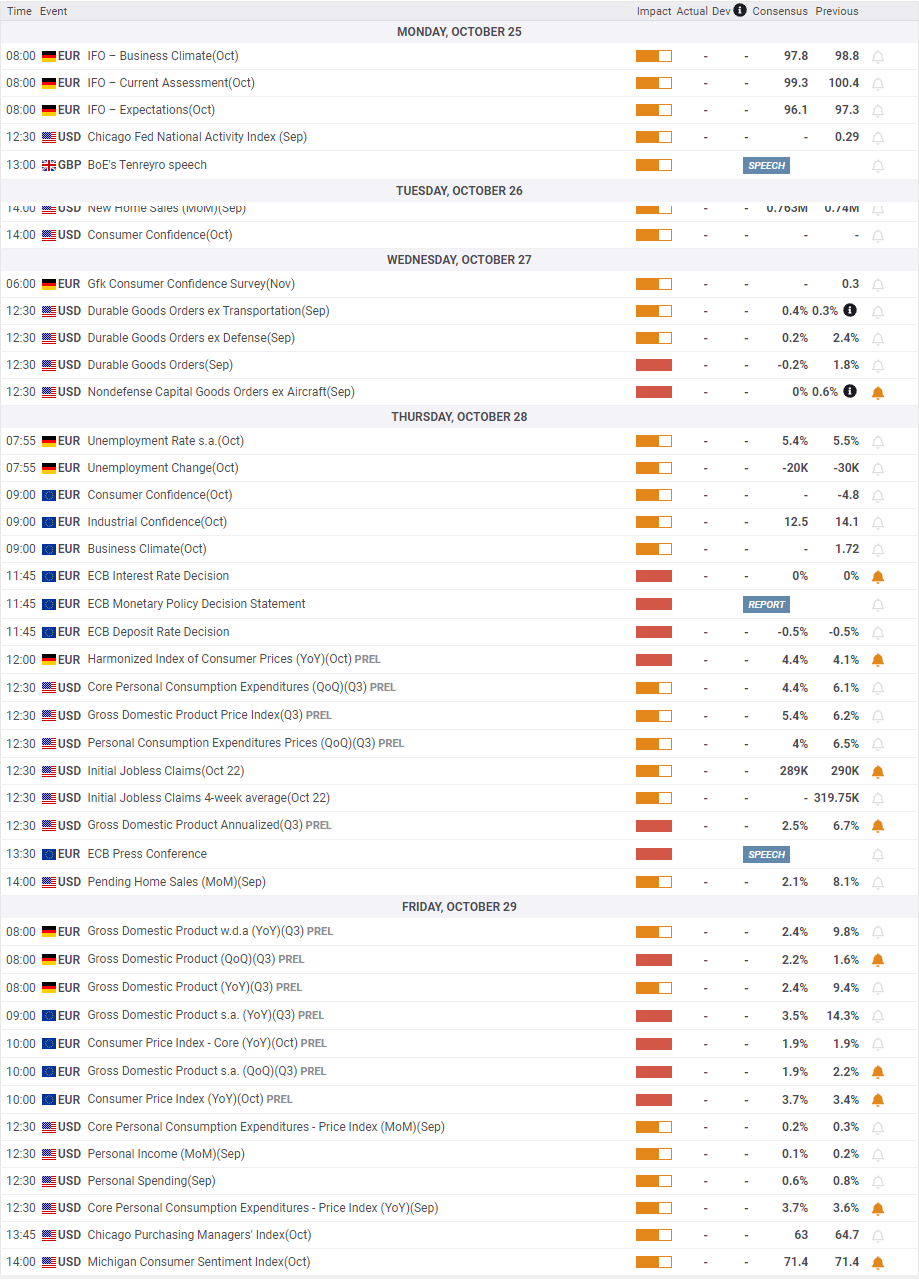 Although the Relative Strength on the daily chart edged higher to 60, it's difficult to say that the outlook is bullish unless gold makes a decisive move above the $1,795/$1,800 area, where the Fibonacci 50% retracement of April-June uptrend, 100-day SMA and the 200-day SMA meet.

On the downside, $1,780 (50-day SMA) aligns as the first support ahead of $1,770 (former resistance, Fibonacci 61.8% retracement). Sellers are likely to maintain control of the action as long as the above-mentioned resistance holds.

According to the FXStreet Forecast Poll, gold is widely expected to reclaim $1,800 in the short term but the upside potential remains limited with an average target of $1,815 on the one-week view. The bullish bias remains intact on the monthly and quarterly outlooks as well. 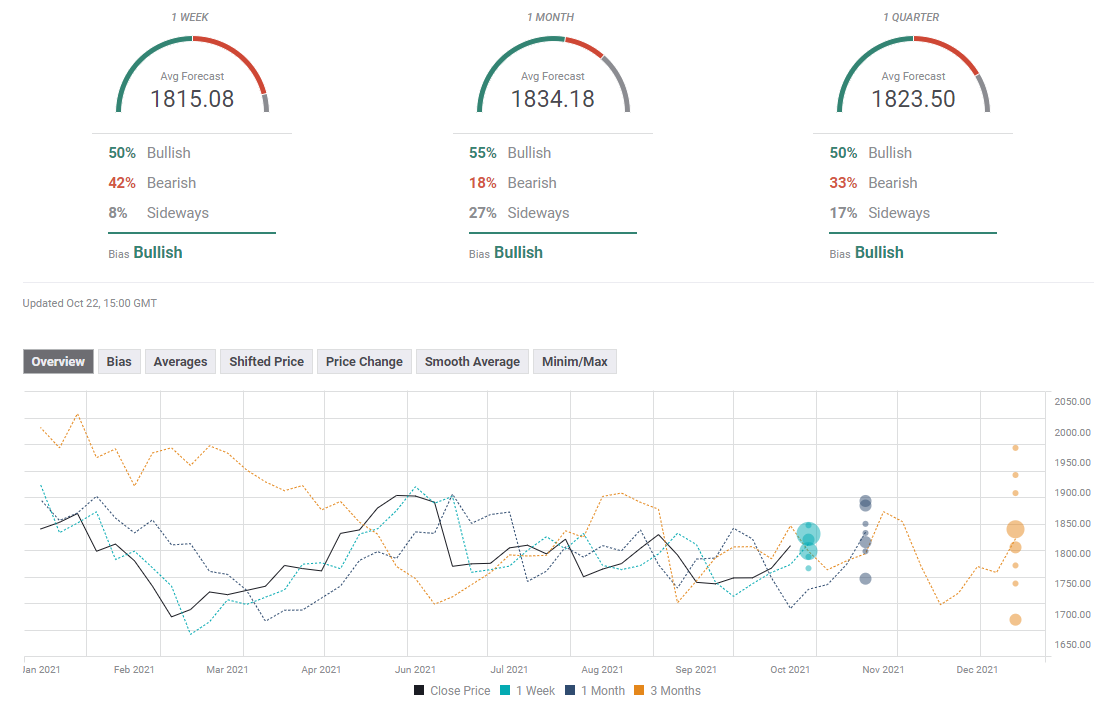