Following a quiet start to the week, gold edged lower but managed to stay afloat above $1,700. With the dollar facing heavy selling pressure ahead of the weekend, XAU/USD extended its upward correction and reached a ten-day high near $1,730 on Friday. Nevertheless, the pair failed to preserve its bullish momentum and closed the week little changed below $1,720. August inflation data from the US next week could have a significant impact on gold’s valuation.

The trading action was subdued on Monday as US financial markets remained closed in observance of the Labor Day holiday. With trading volumes returning to normal levels on Tuesday, risk aversion became apparent in markets, and the dollar started to gather strength, causing XAU/USD to stretch lower.

Following Gazprom’s decision to halt gas supplies to Europe late Friday, the company’s Deputy CEO Vitaly Markelov stated on Tuesday that the Nord Stream 1 pipeline will not be launched until Siemens Energy replaces the faulty equipment. Over the weekend, however, Siemens said it had not been asked to do the job and added that sanctions would not prohibit maintenance. Heightened concerns over a deepening energy crisis in the euro area provided an additional boost to the greenback.

Meanwhile, the ISM reported on Tuesday that the Services PMI improved to 56.9 in August from 56.7 in July. The Employment Index returned into the expansion territory above 50 and the Prices Paid Index, the inflation component, edged slightly lower to 71.5 from 72.3. The 75 basis points (bps) Fed rate hike probability in September climbed above 70% after this data, lifting US Treasury bond yields and further weighing on gold.

The data from China showed early Wednesday that Imports and Exports both rose at a softer pace in August than expected. Although the disappointing trade figures from China forced gold to stay on the backfoot in the first half of the day, the yellow metal reversed its direction during the American session. The Federal Reserve’s Beige Book showed that US firms saw progress on labor supply and price pressure in July, causing the US Dollar Index to pull away from the multi-decade high set at 110.78.

On Thursday, the European Central Bank (ECB) announced that it hiked its key rates by 75 bps as expected. ECB President Christine Lagarde adopted a cautious tone regarding future rate increases, but the 10-year US bond yield rose more than 10%, causing XAU/USD to suffer losses. In turn, XAU/USD also registered daily losses despite the greenback’s uninspiring performance. In a speech delivered on the same day, FOMC Chairman Jerome Powell reiterated that they need to act strongly on inflation and said that history cautions against prematurely loosening the policy. Nevertheless, these remarks had no lasting impact on the USD’s performance against its rivals.

Ahead of the weekend, the positive shift witnessed in risk sentiment triggered a deep dollar sell-off and gold climbed to its highest level in over a week at $1,729.55. Some profit-taking toward the end of the European session, however, capped the precious metal’s gains.

The US Bureau of Labor Statistics will release the Consumer Price Index (CPI) data for August on Tuesday. On a monthly basis, the CPI is expected to decline by 0.1%. The Core CPI, which excludes volatile food and energy prices, is forecast to stay unchanged at 0.3%. FOMC policymakers refrained from confirming a 75 bps rate hike in September and a soft inflation report could cause the probability of a 50 bps rate increase to rise. In that scenario, US T-bond yields are likely to fall sharply and trigger a decisive rally in gold. On the flip side, stronger-than-expected CPI prints could cement a 75 bps rate hike and not allow XAU/USD to turn north. It’s worth noting, however, that markets are already leaning toward an oversized hike, suggesting that the dollar’s potential gains could remain limited.

August Retail Sales figures will be featured in the US economic docket on Thursday, but investors are unlikely to react to these data due to the fact that they are not adjusted for price changes.

On Friday, August Industrial Production and Retail Sales data from China will be looked upon for fresh impetus. Both prints are forecast to reveal a stronger expansion than recorded in July. If these figures disappoint, gold could have a hard time finding demand, with investors losing hope for a steady recovery in gold’s demand and vice versa.

Finally, the University of Michigan’s flash September Consumer Sentiment Index report will be released on Friday. Market participants are likely to pay close attention to the long-run inflation expectations component of the survey rather than the headline Confidence Index. A decline in 5-10 year consumer inflation expectations should hurt the dollar, while an unexpected increase could help the currency gather strength and weigh on XAU/USD. 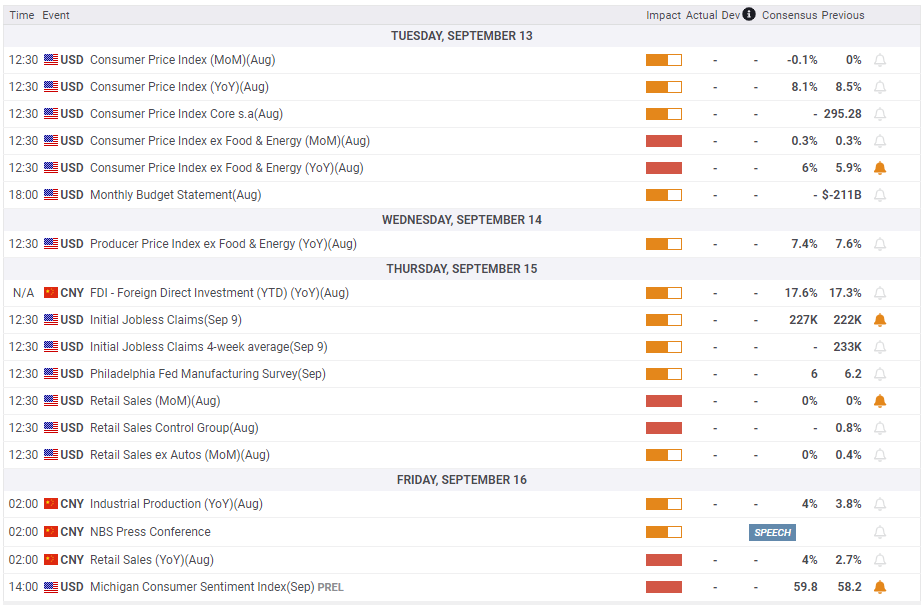 Following this week’s indecisive price action, gold’s near-term technical outlook points to a neutral/bearish bias. The Relative Strength Index (RSI) indicator on the daily chart is yet to reach 50, suggesting that XAU/USD has more correction room on the upside despite struggling to gather bullish momentum.

$1,700 (psychological level, end-point of the downtrend) stays intact as significant support. In case gold falls below that level and starts using it as resistance, bears could target $1,680 (July 21 low) and $1,675 (static support from March 2021).