Gold Price closed the first four days of the week in negative territory and touched its weakest level since late January below $1,790 on Friday before recovering above $1,800. Renewed dollar strength amid risk aversion weighed on XAUUSD and caused it to close the third straight week in negative territory. Ahead of next week’s highly-anticipated June jobs report from the US, gold is likely to find it difficult to stage a convincing rebound.

Gold Price failed to gain support on Monday, despite the news that four members of the G7 decided to ban new imports of Russian gold. According to the World Gold Council, Russia is the second-largest gold producer in the world with 330.9 tonnes in 2021. Meanwhile, from a macro perspective, data from the US showed that Durable Goods Orders rose by 0.7% in May, compared to the market expectation for an increase of 0.1%.

On Tuesday, gold fluctuated in a relatively tight range near $1,820 but ended up posting small daily losses. The Conference Board reported on Tuesday that the Consumer Confidence Index in the US fell to 98.7 in June from 103.2 in May. The publication further revealed that the one-year consumer inflation rate expectation climbed to 8% from May's revised print of 7.5%. With the US Dollar Index turning north after this report, gold continued to edge lower.

While speaking at the European Central Bank’s annual Forum on Central Banking on Wednesday,  FOMC Chairman Jerome Powell reiterated that the US economy could withstand the policy moves and noted that the dollar strength was "disinflationary at the margins." Wall Street’s main indexes suffered heavy losses on Powell’s hawkish remarks and the dollar continued to find demand as a safe haven.

On Thursday, the US Bureau of Economic Analysis announced that the Personal Consumption Expenditures (PCE) Price Index stayed unchanged at 6.3% on a yearly basis in May. The annual Core PCE Price Index, which the Fed uses as its preferred gauge of inflation, declined to 4.7% from 4.9% in the same period as expected. Despite the relatively soft PCE inflation report, month-end flows didn't allow gold to capitalize on falling US Treasury bond yields.

On Friday, the dollar continued to outperform its rivals in the risk-averse market environment and the technical bearish pressure ramped up with gold falling below the key $1,800 level during the European session. The last data release of the week showed that the business activity in the US manufacturing sector expanded at a much softer pace in June than it did in May with the ISM Manufacturing PMI dropping to 53 from 56.1. The benchmark 10-year US T-bond yield lost more than 7% after the disappointing PMI survey and helped XAUUSD limit its losses.

Caixin Services PMI data from China will be looked upon for fresh impetus on Tuesday. Earlier in the week, the upbeat Chinese Manufacturing PMI failed to help gold find demand. Hence, it is unlikely for this report to have a noticeable impact on gold’s valuation.

On Wednesday, the ISM Services PMI will be featured in the US economic docket. Later in the day, the FOMC will release the minutes of its June policy meeting. According to the CME Group FedWatch Tool, markets are currently pricing in a 66.5% probability of another 75 basis points (bps) Fed rate hike in July, compared to 84% a week ago. In case the FOMC’s publication boosts the odds of a 75  bps hike, gold could face additional bearish pressure. On the other hand, a dovish tone could weigh on the dollar and open the door for a rebound.

Finally, the US Bureau of Labor Statistics will release the Nonfarm Payrolls (NFP) data for June on Friday. The labor market is expected to show a loss of growth momentum in June with the NFP rising by 250,000 following May’s increase of 390,000. Investors will also pay close attention to wage inflation data. On a yearly basis, Average Hourly Earnings are expected to rise by 5.2%, same as in May. Unless there is a negative surprise in the NFP print, a higher-than-forecast wage inflation growth could boost the greenback and vice versa.

It's worth noting that gold's inverse correlation with the 10-year US T-bond yield continued to weaken this week. Markets may be reassessing the inflation outlook and turning more optimistic about inflation having peaked already. This could explain how gold, as a traditional inflation-hedge, and US yields fell in tandem this week. Hence, any comments or market developments that point to easing price pressures could trigger a similar market reaction. 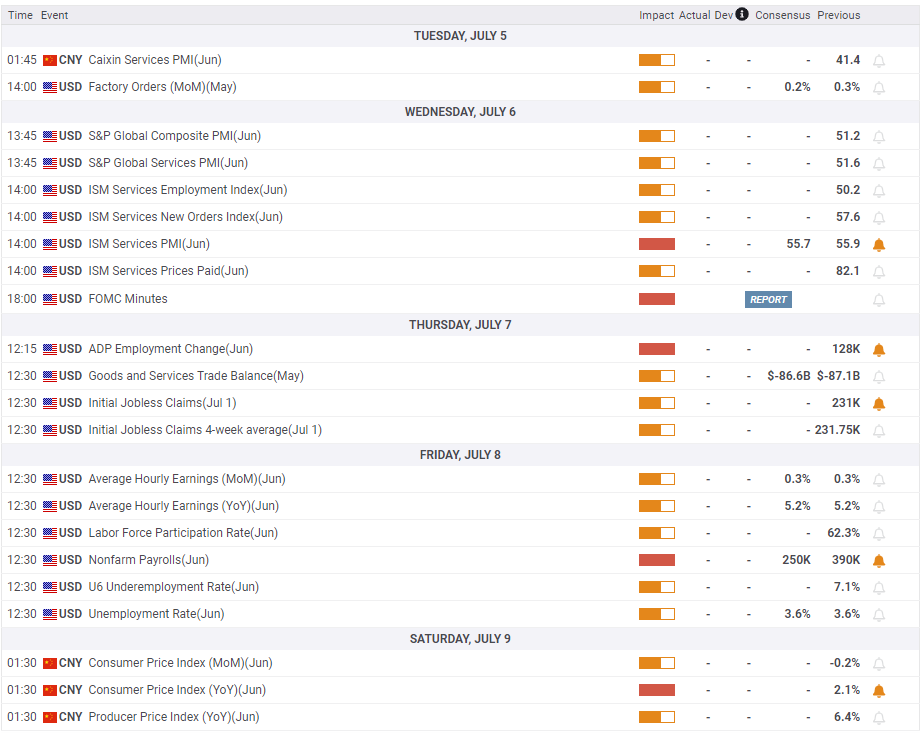 The Relative Strength Index (RSI) indicator on the daily chart stays near 40, suggesting that gold remains bearish and has more room on the downside before turning technically oversold. Sellers, however, might stay on the sidelines until XAUUSD makes a daily close below $1,800 (psychological level). In that scenario, $1,780 (static level) aligns as the next bearish target ahead of $1,767 (static level).

On the upside, $1,810 (static level, former support) aligns as first technical hurdle before $1,832 (20-day SMA). The descending trend line coming from early March stays intact and forms stiff resistance at $1,840, where the 200-day SMA is located.

The majority of experts polled by FXStreet expect gold to go into a consolidation phase next week. The one-month outlook paints a mixed picture with the average target sitting at $1,790. 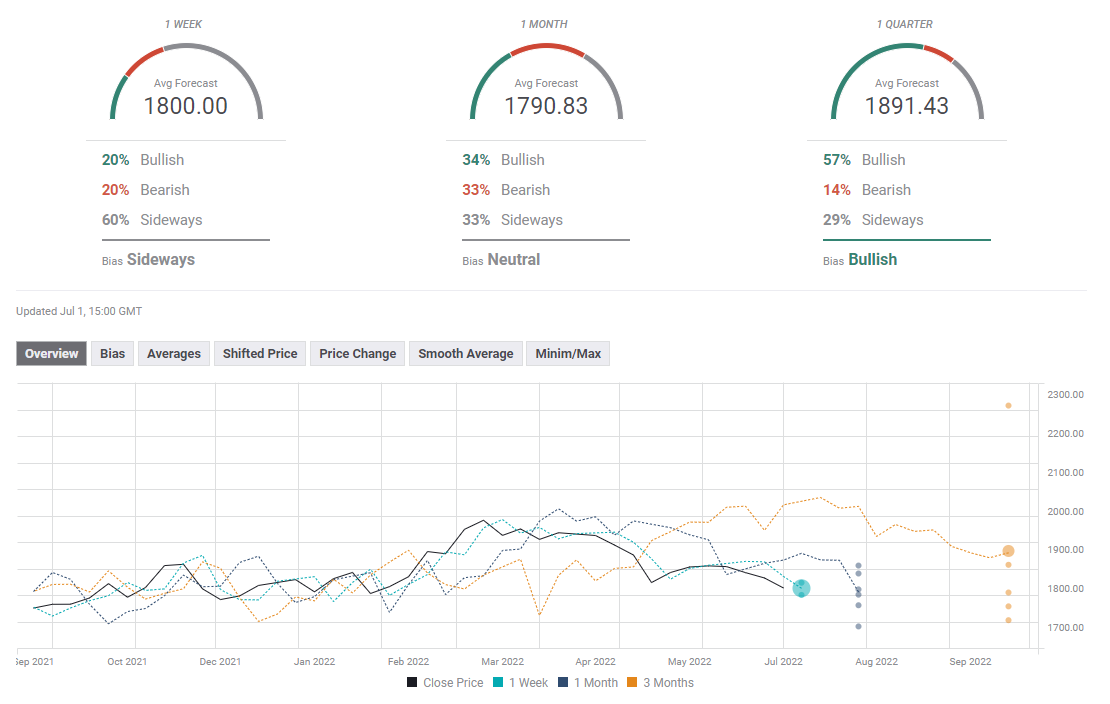