Gold started the week on a bullish note and climbed above $1,800 for the first time since early July mid-week before losing its traction. With the dollar staying surprisingly resilient against its rivals despite the soft inflation data, XAU/USD stayed under modest bearish pressure in the second half of the week. The Federal Reserve will release its July policy meeting minutes next week and market participants will look for fresh clues regarding the size of the US central bank’s next rate increase.

The dollar rally that was fueled by the impressive jobs report on Friday lost its steam at the beginning of the week as investors booked their profits ahead of the highly-anticipated US inflation data. Gold gained nearly 1% on Monday and closed the day near $1,790. In an appearance before the Kansas Bankers Association over the weekend, Fed Governor Michelle Bowman said that she strongly supports super-sized rate increases to fight inflation but market participants refrained from further betting on a 75 basis points September hike.

With the trading action remaining subdued on Tuesday, gold managed to continue to push higher toward $1,800 amid retreating US Treasury bond yields. The data from the US revealed that the Unit Labor Costs rose by 10.8% in the second quarter, above the market expectation of 9.5%.

The US Bureau of Labor Statistics reported on Wednesday that inflation in the US, as measured by the Consumer Price Index (CPI), declined to 8.5% on a yearly basis in July from 9.1% in June. Additionally, Core CPI, which excludes volatile food and energy prices, remained unchanged at 5.9%, falling short of analysts’ estimate of 6.1%. With the initial market reaction, the dollar came under heavy selling pressure and gold touched its highest level in a month above $1,800. According to the CME Group FedWatch Tool, the probability of a 75 bps Fed rate hike in September dropped to 30% from 70% ahead of the CPI data release. In turn, the benchmark 10-year US Treasury bond yield fell as much as 4%, fueling XAU/USD’s rally.

FOMC policymakers, however, reminded markets that they will not overreact to a single inflation data. Minneapolis Fed President Neel Kashkari and San Francisco Fed President Mary Daly both noted that they were still far away from declaring victory on inflation. On a hawkish note, Chicago Fed President Charles Evans said that the Fed was not finished with rate hikes and added that he was expecting the fed funds rate to top out at 4%. Following these comments, the odds of a 50 bps September rate increase declined below 60% on Thursday, causing gold to pull away from monthly highs toward $1,790.

In an interview with Bloomberg late Thursday, Daly acknowledged that she was keeping an open mind about a 75 bps rate hike in September. The USD staged a rebound on Friday and forced XAU/USD to stay on the back foot. Finally, the University of Michigan's Consumer Sentiment Survey for August revealed that the long-run inflation outlook edged higher to 3% from 2.9%. This data helped the dollar continue to outperform its rivals and capped gold's upside ahead of the weekend.

Retail Sales data from China will be looked upon for fresh impetus at the beginning of the week. Investors expect sales to rise by 5% on a yearly basis in July following June’s increase of 3.1%. Although the impact of this data on gold’s valuation is likely to remain short-lived, a weaker-than-expected print could weigh on the risk sentiment and drag XAU/USD lower by providing a boost to the dollar and vice versa.

On Tuesday, Building Permits and Housing Starts data for July will be featured in the US economic docket. The real estate market is under pressure amid rising mortgage rates and investors grow increasingly concerned about a possible housing crisis. Hence, a sharp decline in Housing Starts could trigger a flight to safety and help the dollar gather strength.

The US Census Bureau will release the Retail Sales data for July and the FOMC will publish the minutes of its July policy meeting. The publication is likely to reaffirm that policymakers will continue to watch the data before committing to a specific size of a rate increase in September. If the minutes show that the Fed sees a heightened risk of recession, the greenback could lose interest and open the door for a leg higher in gold. On the other hand, investors could reassess the Fed’s rate outlook in case they are convinced that the Fed will stay on an aggressive tightening path until they see consecutive drops in inflation figures. In short, XAU/USD is likely to remain inversely correlated with the US T-bond yields mid-week.

Thursday’s weekly Initial Jobless Claims and the Federal Reserve Bank of Philadelphia’s Manufacturing Survey will be the last data releases of the week, which are not expected to trigger a significant market reaction.

To summarize, market pricing of the Fed’s rate outlook should continue to drive the dollar’s valuation and XAU/USD’s action in the short term. 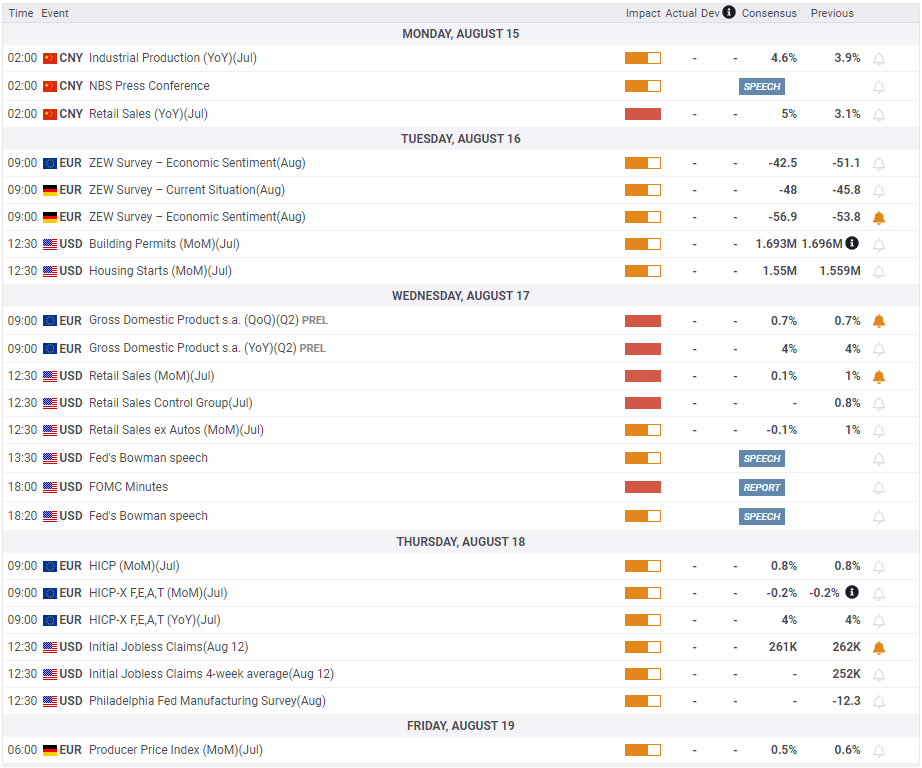 Gold's technical bullish bias stays intact in the short term. The Relative Strength Index (RSI) indicator on the daily chart holds steady near 60 and XAU/USD managed to close the last four days above the 50-day SMA.

Nevertheless, $1,800 capped this week's advance and buyers are likely to refrain from betting on further gold strength unless this resistance fails. Above that level, $1,830 (Fibonacci 38.2% retracement of the latest uptrend) aligns as the next bullish target ahead of $1,840, where the 100-day and the 200-day SMAs are located.