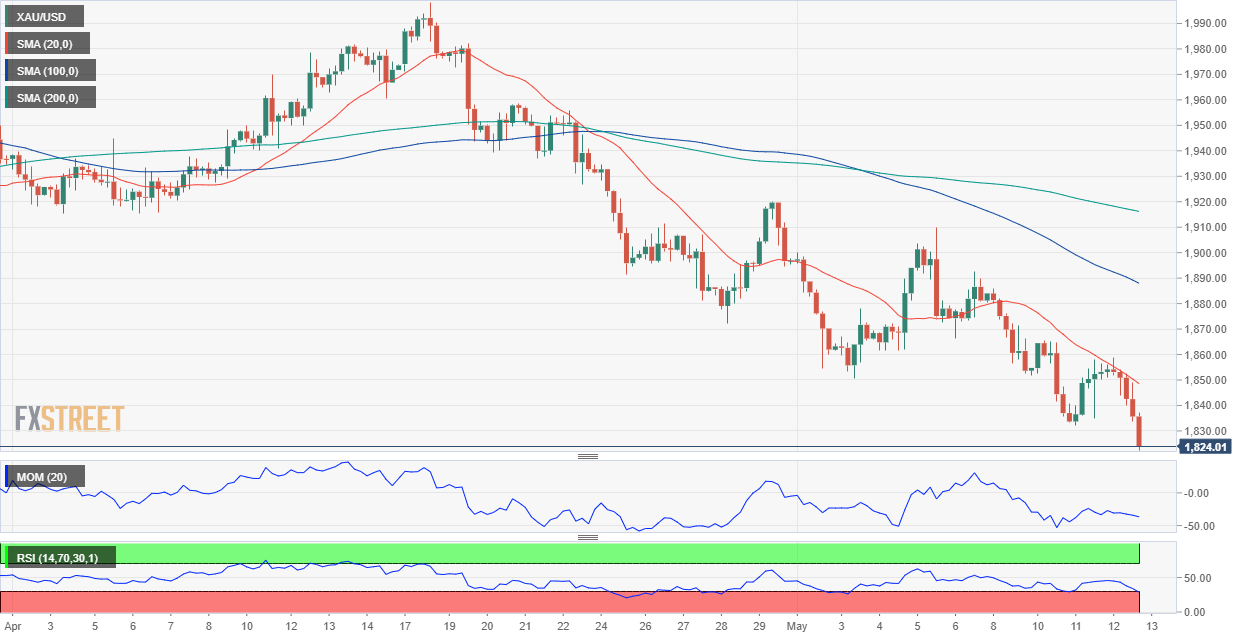 Gold Price trades near a fresh weekly low of $1,822.10 a troy ounce amid panic boosting demand for the American currency. There was no specific catalyst for the latest market’s reaction but a cluster of well-known factors denting the sentiment for long. Meanwhile, tensions between Russia and the western world continue to escalate, with the country menacing with retaliation should Finland join NATO. Finland’s president  and Prime Minister earlier said that the country should apply to join NATO “without delay.”

On the other hand, central banks embarked on quantitative tightening. European Central Bank officials keep paving the way towards a July rate hike, with different officials favoring such a movement. Also, Bank of Canada Deputy Governor Toni Gravelle suggested that the central bank would need to raise rates above neutral. It is worth noting that the US Federal Reserve is two steps ahead of other central banks, having hiked rates by 50 bps in May and pledging for at least 2 or 3 more 50 bps hikes while drawing plans to reduce its balance sheet.

Stocks are down alongside government bond yields amid renewed demand for safety. Wall Street can’t find its footing, with the three major indexes in the red and flirting with fresh monthly lows. Meanwhile, the US 10-year Treasury note yields 2.85%, far below the peak of above 3.20% posted in May.

The daily chart for XAUSUD shows that the price is pressuring a flat 200 SMA for a third consecutive day while developing below the 20 and 100 SMAs. The shorter one continues heading firmly lower above the longer ones, reflecting strong selling interest. Technical indicators, in the meantime, hover near oversold readings lacking clear directional strength.

The bright metal is firmly bearish according to technical readings in the 4-hour chart. Gold has met sellers for a second consecutive day around a bearish 20 SMA, now providing dynamic resistance at around $1,845. Technical indicators have accelerated their declines after the metal broke below the previous weekly low and trades at levels last seen in February.

View Live Chart for the XAU/USD