The US dollar end higher for the third consecutive month in June and made a positive start to the new month and quarter on Monday. However, today it has given up Monday’s gains and was therefore trading flat on the week at the time of writing. The fact that the greenback has weakened across the board, this points to profit-taking ahead of key events later on in the week. These include, among other things, UK services PMI on Wednesday; the last FOMC meeting minutes on Thursday and the June employment reports from both North American nations on Friday.

The weakness of the dollar has given the buck-denominated gold a boost. However, it remains to be seen whether the perceived safe haven commodity will be able to hold onto its gains given the overall ‘risk-on’ tone in the markets today, not to mention the metal’s strong bearish trend of late.

In fact, today’s rebound just ahead of prior low at $1236/7 area looks suspicious. Although it has found support from the bullish trend line, which gives some validity to the rebound, we are of the view that the metal may drop to test liquidity beneath that $1236/7 swing low, before it potentially goes up. Indeed, a stronger support level is around the $1225 level, for this had been the base of the breakout back in July of last year.

In any case, we will only get bullish on gold when there is a strong enough evidence that the buyers are back in town or there is a break in market structure of lower lows and lower highs – e.g. if gold were to break above the most recent high at $1255/6 area. So, while the metal may be up today and it could well be in the process of forming a low, we are not convinced just yet. 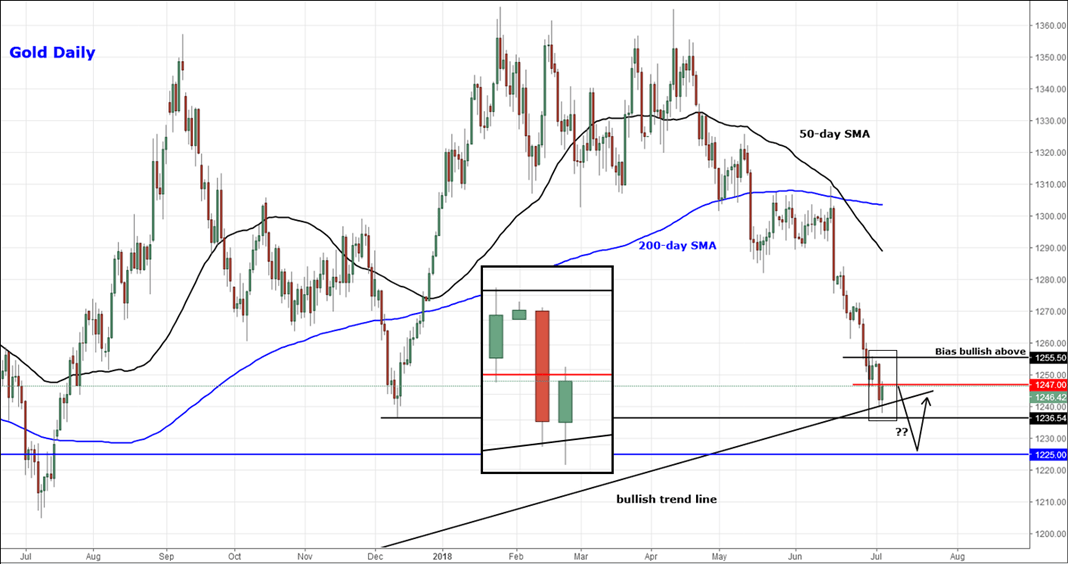