The GDPNow forecast plunged from +0.7 percent to -1.0 percent today. It's ugly but not as bad as it looks, at least yet. 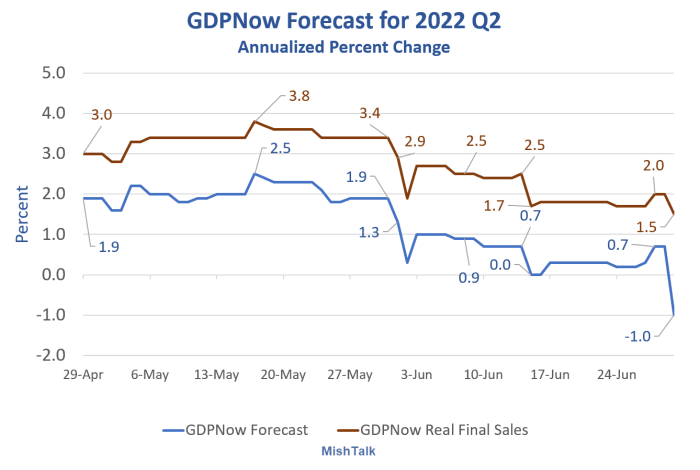 GDPNow data from the Atlanta Fed, chart by Mish

The GDPNow model estimate for real GDP growth (seasonally adjusted annual rate) in the second quarter of 2022 is -1.0 percent on June 30, down from 0.3 percent on June 27. After recent releases from the US Bureau of Economic Analysis and the US Census Bureau, the nowcasts of second-quarter real personal consumption expenditures growth and real gross private domestic investment growth decreased from 2.7 percent and -8.1 percent, respectively, to 1.7 percent and -13.2 percent, respectively, while the nowcast of the contribution of the change in real net exports to second-quarter GDP growth increased from -0.11 percentage points to 0.35 percentage points.

The previous forecast was on June 27 at 0.3 percent. The model rose from 0.3 percent to 0.7% on June 28 on Advance Economic Indicators (inventories and international trade in goods).

The overall number is not what matters although the -1.0 percent estimate looks ugly.

What does matter is real final sales. The rest is inventory adjustment that nets to zero over time. That number is still an acceptable 1.5 percent, assuming it holds.

But how likely is that?

File this under: What a difference a month can make.

This is why it’s critical to appreciate the final input to Q2 GDP hitting the wires August 17th later this summer. It’s ALL about the revisions when it comes to U.S. GDP math. pic.twitter.com/QTTAsIjZmT

I have been harping for two month that I expect negative revisions.

We subsequently had negative revisions to retail sales and today to personal consumption expenditures.

CFOs on average expect real gross domestic product to grow 1.5% over the next 12 months, down from an expectation of 2.5% in Q1. Final estimate for Q1 GDP released Wednesday showed slightly worse contraction than first reported DUE TO SHARP DOWNWARD REVISION TO CONSUMER SPENDING” pic.twitter.com/zkXWbnA5fo

At least, they are not telling us the "Consumer is Strong."

I am not sure what some of these economists are smoking with expectations ranging all the way up to a 1.1% rise in PCE.

We already had negative revisions to retail sales in May, so why would PCE rise?

It didn't, in real terms. And as expected and announced by me in advance, we had negative revisions and then a weak report on top of it.

The net result of all the activity since June 27 was a dive in the baseline estimate to -1.0 percent.

However, and more importantly, the GDPNow forecast of Real Final Sales only declined to +1.5%.

That's not recession territory if it holds, but why would it?

The second quarter ended today, But the data lags.

We have a key ISM number next week, another retail sales report, more housing reports, and another personal income and outlays report.

Look at the trend folks. Where is it headed? And there is still a month's worth of data coming in.

Personal income and spending: The latter much weaker than expected in May

Real PCE decreased 0.4 percent in May; goods decreased 1.6 percent and services increased 0.3 percent. And we had big negative revisions to April.

I've Seen Enough, the US is in Recession Now, Q&A on Why.

On June 22, I commented I've Seen Enough, the US is in Recession Now, Q&A on Why.

This report and the negative BEA revision to first-quarter GDP strengthens my conviction that recession started no later than May.

It's possible a recession started in the first quarter given negative BEA GDP revisions,

On June 29 I commented The Odds of Recession Starting in the "First" Quarter of 2022 Just Leaped.

Despite a huge negative Q1 revision, I am still sticking with May as the recession start. See the above links for an explanation.

In case you missed it please see Powell: "We understand better how little we understand about inflation”.

Powell: “Is there a risk we would go too far? Certainly there’s a risk. The bigger mistake to make, let’s put it that way, would be to fail to restore price stability.”

Powell is committed to whipping inflation even at the expense of recession. That means a recession is now baked in the cake, sooner not later.

EUR/USD has tumbled below 1.0300 amid a notable recovery in the US dollar. Risk remains in a weaker spot amid US-Sino tensions and China's covid woes, underpinning the dollar's safe-haven appeal. Investors reassess Fed rate hike expectations after soft US CPI.

GBP/USD remains pressured around 1.2200 heading into Thursday’s London open, having witnessed the most significant daily jump in two months the previous day. US Jobless Claims, PPI will also be important for intraday directions.