GBPUSD buyers remained unstoppable for the second straight week, despite a lack of bullish impetus from the highly-anticipated United Kingdom Autumn Budget. The Pound Sterling also stood resilient to the recent rebound in the US Dollar, as attention now turns toward the US Federal Reserve’s (Fed) November policy meeting minutes in the Thanksgiving week.

GBPUSD extended its previous week’s recovery rally and reached the highest level in three weeks at 1.2028 in the first half of the week before entering a phase of upside consolidation. Despite a pause in the upbeat momentum, the Pound Sterling booked the second straight weekly gain against the US Dollar.

The Pound Sterling investors stayed on the back foot at the start of the week, refraining from placing fresh directional bets ahead of Thursday’s all-important fiscal budget plan from the United Kingdom Finance Minister Jeremy Hunt. Meanwhile, the US Dollar found fresh demand amid China’s growth concerns and hawkish comments from the US  Federal Reserve policymakers. Federal Reserve Governor Christopher Waller said that they were "way out in front,” adding that the 7.7% annual CPI was still "enormous."

Amid a lack of top-tier US economic data, the pair remained influenced by the broader market sentiment, as risk flows returned and pushed GBPUSD to three-month highs above the 1.2000 threshold. The Producer Price Index (PPI) data from the United States, released on Tuesday, dropped to 14-month lows, arriving at 8.0% from a year ago, the smallest annual gain in more than a year, and 0.2% from a month earlier. A softer PPI combined with a decline in the United States Consumer Price Index (CPI) bolstered expectations of smaller Federal Reserve interest rate increases, which triggered a massive sell-off in the US Dollar alongside the US Treasury bond yields. The upside in GBPUSD, however, was capped by the disappointing United Kingdom labor market report. The UK’s jobless rate edged higher to 3.6% in September from 3.5% in August. The Average Earnings Excluding Bonus rose to 5.7% from 5.5% vs. 5.6% expectations.

Persistent US Dollar weakness and red-hot Consumer Price Index (CPI) gauge from the British economy helped GBPUSD preserve some of the early gains. The United Kingdom annualized Consumer Prices Index (CPI) jumped to 11.1% in October when compared to 10.1% recorded in September while beating estimates of a 10.7% figure, the UK Office for National Statistics (ONS) reported on Wednesday. The index rose to its highest level since October 1981. The relentless surge in the UK inflationary pressures propelled bets of supersized Bank of England (BoE) rate hikes in the coming months. Testifying before the UK Treasury Select Committee on Wednesday, BoE Governor Andrew Bailey said "still likely we will increase interest rates further." Markets also digested the geopolitical headlines surrounding missiles landing in Poland, which was apparently shot by Ukraine and offered some comfort to US Dollar bulls.

GBPUSD snapped a two-day uptrend on Thursday, as sellers returned on account of resurgent US Dollar demand and the UK Autumn Budget disappointment. The United Kingdom Chancellor Jeremy Hunt unveiled an austerity budget with 55 billion Pound Sterling in tax hikes and spending cuts. It was Hunt’s emphasizing a recession for the UK economy, which sank GBPUSD below 1.1800. Chancellor Jeremy Hunt told the country’s Parliament that the austerity plan would lead to a "shallower downturn" with fewer jobs lost. The Office for Budget Responsibility (OBR)  said that this (the budget) will tip the economy into a recession "lasting just over a year" as consumers spend less and businesses cut investment.

Meanwhile, the US Dollar was rescued by the hawkish comments from St. Louis Fed President, James Bullard. The hawk said that policymakers should raise interest rates to at least 5% to 5.25%, adding that “the policy rate is not yet in a zone that may be considered sufficiently restrictive.” His comments triggered a staggering recovery in the US Treasury bond yields across the curve, underpinning the demand for the US Dollar while collaborating with the downside in the GBPUSD pair.

The Pound Sterling pair returned to the green zone on Friday, as the US Dollar lost its recovery momentum, courtesy of the sell-off in USDJPY. Japan’s Consumer Price Index surged to a 40-year high and fanned expectations of a hawkish Bank of Japan (BoJ) pivot, putting a bid under the Japanese Yen at the USDJPY’s expense. However, the choppy price action in the US Dollar continued, leaving GBPUSD in a familiar range at around 1.1900, even though the United Kingdom Retail Sales data came in mixed for October. The UK Retail Sales arrived at 0.6% MoM in October vs. 0% expected and -1.5% previous. The core retail sales, stripping the auto motor fuel sales, rose 0.3% MoM vs. 0.6% expected and -1.5% previous. On an annualized basis, the UK retail sales plunged 6.1% in October versus -6.5% expected and -6.8% prior.

With the UK Autumn Budget and the Consumer Price Index out of the way, the focus shifts to the economic events from the United States in the holiday-shortened Thanksgiving week.

Bank of England Deputy Governor Jon Cunliffe is due to speak on Monday, although he is going to touch upon digital currencies. There are no significant data releases from both sides of the Atlantic on the first two days of the week. Federal Reserve Bank of Cleveland, President Loretta Mester, will take up the rostrum on Tuesday. Her comments could have a high impact on US Dollar valuations.

Wednesday will be eventful, with speeches from the Federal Reserve policymakers on the cards ahead of the Preliminary Services and Manufacturing PMIs from the United States and the United Kingdom. The Federal Reserve minutes, however, will hog the limelight on Wednesday. The Federal Reserve board members’ thinking on the pace of future rate hikes will be of interest to market participants. The University of Michigan’s revised Consumer Sentiment and Inflation expectations will be also closely eyed.

A bunch of Bank of England policymakers will entertain Pound Sterling traders on Thursday amidst the release of the United Kingdom CBI Industrial Order Expectations data and a Thanksgiving holiday in the United States. A data-dry Friday from both economies will wrap up a relatively busy week. 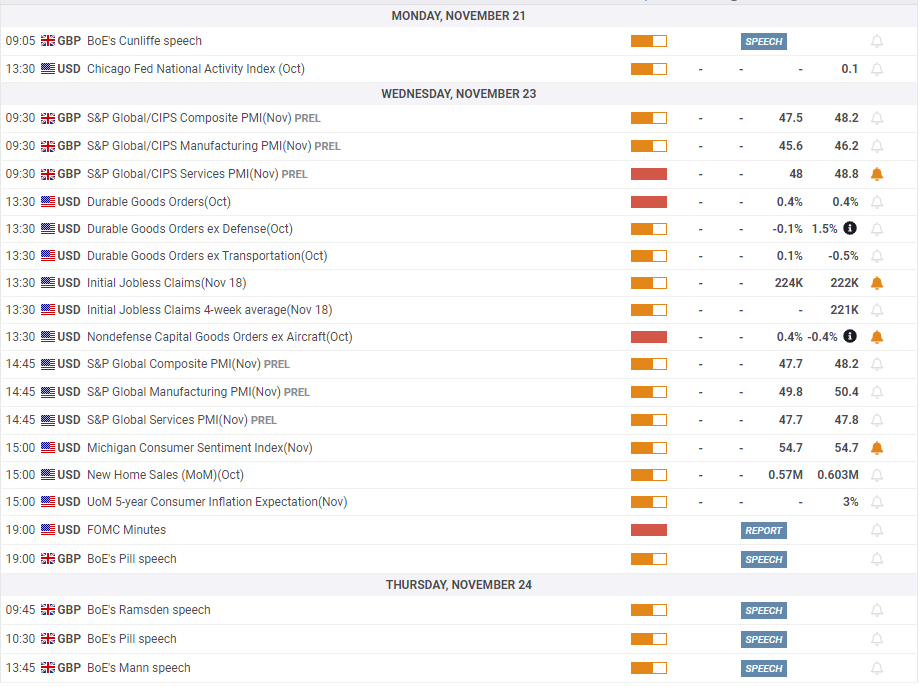 GBPUSD faces initial resistance at 1.2000 (psychological level, static level). In case the pair rises above that level and starts using it as support, it could target 1.2200 (200-dau SMA) and 1.2300 (static level) afterwards.

FXStreet Forecast Poll points to an overwhelmingly bearish bias in the one-month and one-quarter views with average targets for those time frames aligning at 1.1279 and 1.1196, respectively. 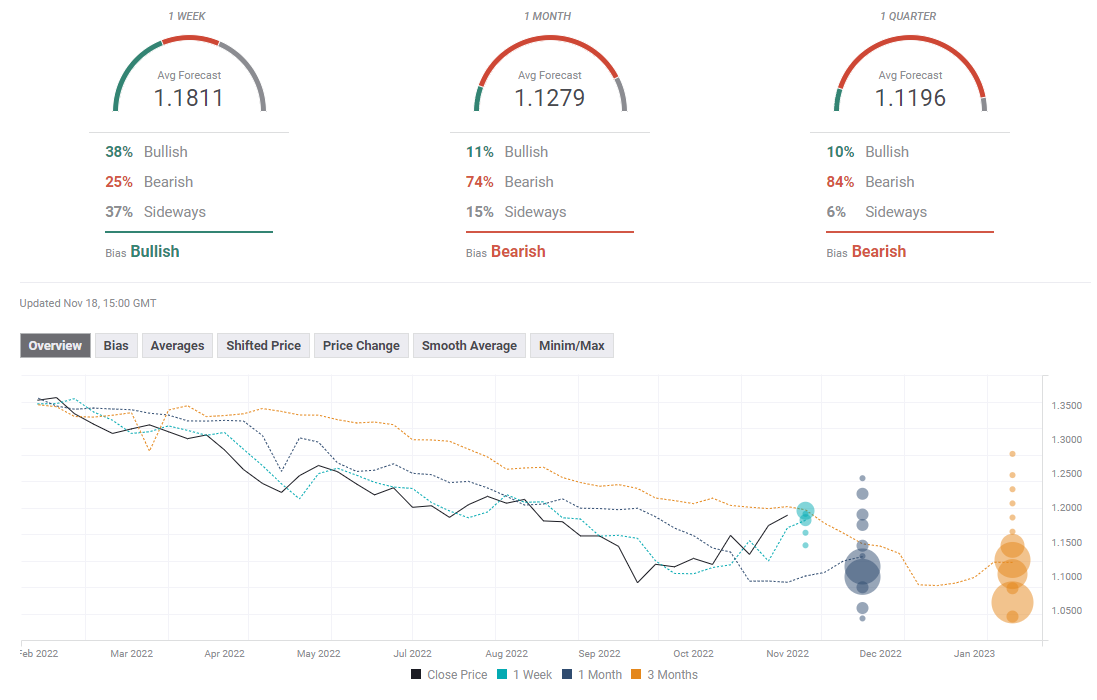 EUR/USD is consolidating the latest gains below 1.0600, in the early European morning on Friday. The US Dollar extends weakness alongside falling Treasury yields amid a tepid risk sentiment. Investors await the US PPI and inflation expectations data for fresh cues.

GBP/USD marches towards 1.2300 on softer US Dollar ahead of key data

GBP/USD is heading toward 1.2300, staying on the front foot for the third consecutive day on Friday. The Cable capitalizes on weaker US Dollar and Treasury yields amid mounting US recession fears. US economic data are eagerly awaited.