The British pound rose slightly after a hawkish statement from Andrew Bailey, the Bank of England (BOE) governor. Testifying in parliament, Bailey said that the UK economy had staged a remarkable recovery even as he warned against complacency. He also warned that the country’s economic growth was flattening. Another notable statement was that he remained optimistic that the BOE will hike interest rates in the next few years. The testimony came at a time when the UK is deliberating on Boris Johnson's decision to hike taxes to fund the NHS. His administration expects to raise about 12 billion pounds by taxing companies, individuals, and dividends.

The euro stabilized as investors shift their focus to the European Central Bank (ECB) interest rate decision that will come out later today. Analysts expect the bank will leave interest rates unchanged even after a surprise increase in inflation. In a statement this month, Eurostat said that the bloc's inflation rose to 3% in August. The key mover for the currency will be the bank's statement on the pandemic emergency purchase program (PEPP) or quantitative easing program. The bank will likely leave the QE policy unchanged as it waits for more data about the impact of the Delta variant.

The Canadian dollar declined sharply against the US dollar after a modest interest rate decision. The currency then erased some of the losses after the strong US vacancies report. Data by the Bureau of Labor Statistics (BLS) showed that US vacancies rose to almost 11 million in August. Meanwhile, the Bank of Canada decided to leave interest rates and quantitative easing policies unchanged. The cautious tone happened as Canada prepares for a flash election later this month.

The USDCAD pair initially rose to 1.2767 after the latest BOC interest rate decision. This was its highest level since August 23. The pair then stabilized to the current 1.2670, which is substantially higher than last week’s low of 1.2670. The pair is still above the 25-day moving average while the Relative Strength Index (RSI) rose to the overbought level. Therefore, the pair will likely keep rising as bulls target this week's high at 1.2767. 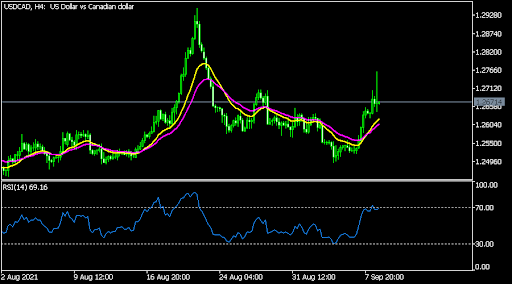 The EURUSD pair was relatively unchanged in the overnight session as traders waited for the upcoming ECB decision. On the four-hour chart, the pair moved below the 25-day moving average and entered the Ichimoku cloud. At the same time, the DeMarker indicator moved to the oversold level. Therefore, while the bearish trend may continue, a rebound cannot be ruled out in the near term. 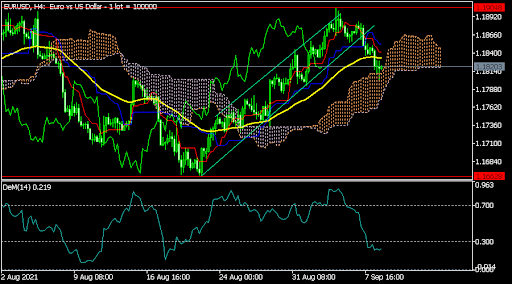 The GBPUSD pair made some modest gains in the overnight session as investors reflected on the statement by Andrew Bailey. The pair rose from an intraday low of 1.3726 to 1.3783. On the hourly chart, the pair is hovering at the same level as the 25-day EMA. It is also slightly below the lower line of the ascending channel. At the same time, it has formed a head and shoulders pattern. Therefore, a bearish breakout cannot be ruled out. 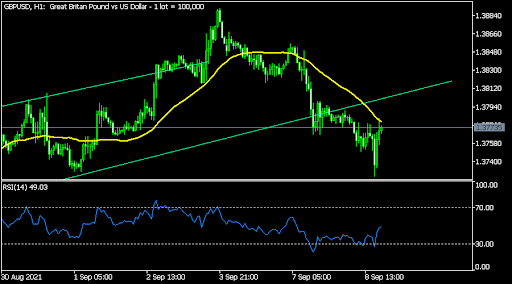 GBP/USD lost its traction and fell into the negative territory below 1.3500. The greenback seems to be capitalizing on FOMC Chairman Jerome Powell's hawkish remarks, causing the pair to continue to edge lower.

Tesla (TSLA) reported earnings for Q4 after the close on Wednesday. Earnings per share came in at $2.54 versus the average estimate of $2.26. Revenue was $17.72 billion versus estimates for $16.35 billion.