GBP/USD booked a third straight weekly advance and gained over 200 pips on the week, as broad-based United States Dollar (US) weakness emerged as the key driver amid a holiday-shortened Thanksgiving week. GBP/USD buyers now look forward to a fresh batch of top-tier economic events from the United States for the next push higher.

The US Dollar’s pain was also exacerbated by a slew of discouraging economic data from the United States published ahead of Thanksgiving Day. The United States preliminary S&P Global Composite PMI Output Index, which tracks the manufacturing and services sectors, fell to 46.3 this month from a final reading of 48.2 in October, signaling heightened recession risks in the world’s largest economy. The US weekly Initial Jobless Claims hit three-month highs of 240K, in the face of rising layoffs in the United States technology sector. Markets ignored the 1% jump in the US Durable Goods Orders data, as they see a slowdown in the American economy as inevitable.

Further, Thanksgiving Day-induced thin trading conditions followed by a partial holiday on Black Friday allowed the Pound Sterling buyers to have an upper hand over the US Dollar bulls. Federal Reserve policymakers also voiced their support for slower rate increments during their appearance throughout the week, rendering US Dollar negative.
On the British Pound side of the story, Brexit headlines once again came to the fore after Bloomberg reported that the United Kingdom Prime Minister Rishi Sunak is starting to have second thoughts about Brexit even after more than six years of division with the European Union (EU). Some sources reported that UK Finance Minister Jeremy Hunt is said to have privately pushed for Britain to have closer ties with the European Union. Countering the rumors, Prime Minister Rishi Sunak said that Britain will not pursue any post-Brexit relationship with Brussels "that relies on alignment with European Union laws”.

Meanwhile, several Bank of England (BoE) Monetary Policy Committee (MPC) members also took the rostrum, delivering hawkish messages and keeping the Pound Sterling buoyed. Bank of England (BoOE) policymaker Catherine Mann said that “the BoE has communicated effectively that rates need to rise and that market expectations before the November meeting were too high.” Bank of England Deputy Governor Dave Ramsden noted, “my bias is towards further tightening, but depends on the economy.”

It’s a data-dry week for the United Kingdom, and hence, the high-impactful United States economic data will be closely followed for fresh trading incentives on the GBP/USD pair. Monday is a quiet day on both sides of the Atlantic, except for the speech from New York Fed President John Williams.

On Tuesday, the only meaningful data in the United States will be the release of Conference Board Consumer Confidence in November. Traders will brace for a wholesome Wednesday, with a handful of top-tier macro news on the cards from the United States. The preliminary reading of the US quarterly Gross Domestic Product (GDP) will be published alongside the JOLTS Job Openings and Pending Home Sales data. Ahead of that, the United States ADP Employment Data will also drop in.

However, Federal Reserve Chair Jerome Powell’s speech will steal the spotlight. Jerome Powell is due to speak about the economy and labor market at the Brooking Institution, in Washington DC. His speech will be closely scrutinized ahead of Friday’s Nonfarm Payrolls release.

On Thursday, OPEC and its allies (OPEC+) meeting will grab attention, especially after last week’s oil price volatility and reports of increased OPEC production. The oil price action on the OPEC+ decision could impact the market sentiment, in turn, influencing the risk-sensitive Pound Sterling.

The United States Core PCE Price Index, Weekly Jobless Claims and S&P Global final Manufacturing PMI will be released. But the US ISM Manufacturing PMI and the prices paid component will hold the key for the US Dollar trades.
The US labor market report will stand out on Friday, which will provide fresh insights on the Federal Reserve’s future policy course. 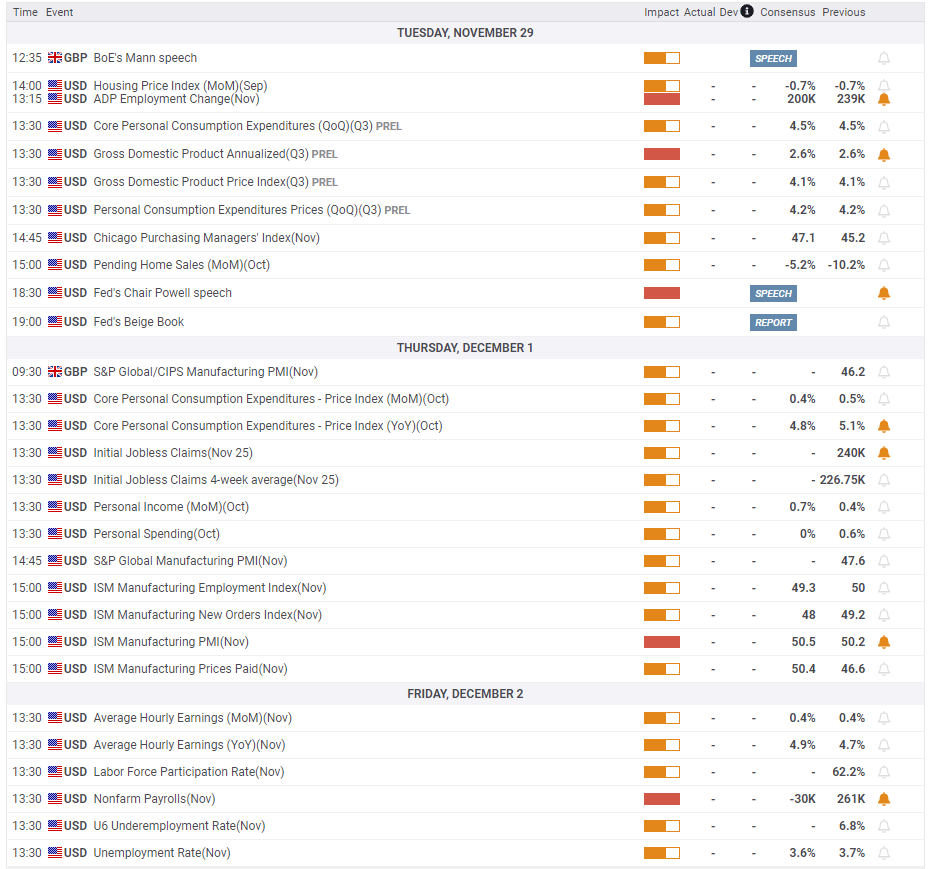 GBP/USD’s daily chart technical setup favors bulls. The pair’s price has now broken well above the key September highs, in the mid 1.1730s, and thus established a new rising sequence of peaks and troughs suggesting the start of a new broad uptrend. A further break  and daily close above the critical 200-Daily Moving Average (DMA) at 1.2185 would seal the deal for Pound Sterling bulls.,

Acceptance above the latter would probably then lead to a test of the horizontal trendline resistance connecting the August 10 high at 1.2276. The next relevant upside target is seen around the 1.2400 round number.
The 14-day Relative Strength Index (RSI) has turned flat while above the midline, suggesting that bulls are gathering strength for a big break higher. Further, the 21 and 100-Daily Moving Average (DMA) bullish crossover remains in play, providing credence to the bullish potential.

Alternatively, any retracement will test a strong resistance-turned-support at 1.2000,  a break below which could trigger a corrective decline toward the recent range lows at around 1.1770. The last line of defense for GBP/USD buyers is in the lower 1.1700s, where the September highs, the 21 and the 100 DMAs are located. A break below these would cast the nascent uptrend into doubt.

Despite GBP/USD relatively upbeat performance in the past few weeks, the FXStreet Forecast Poll shows that the majority of experts see the pair suffering large losses on a one-month and one-quarter views. For these time frames, average targets align at 1.1429 and 1.1312, respectively. 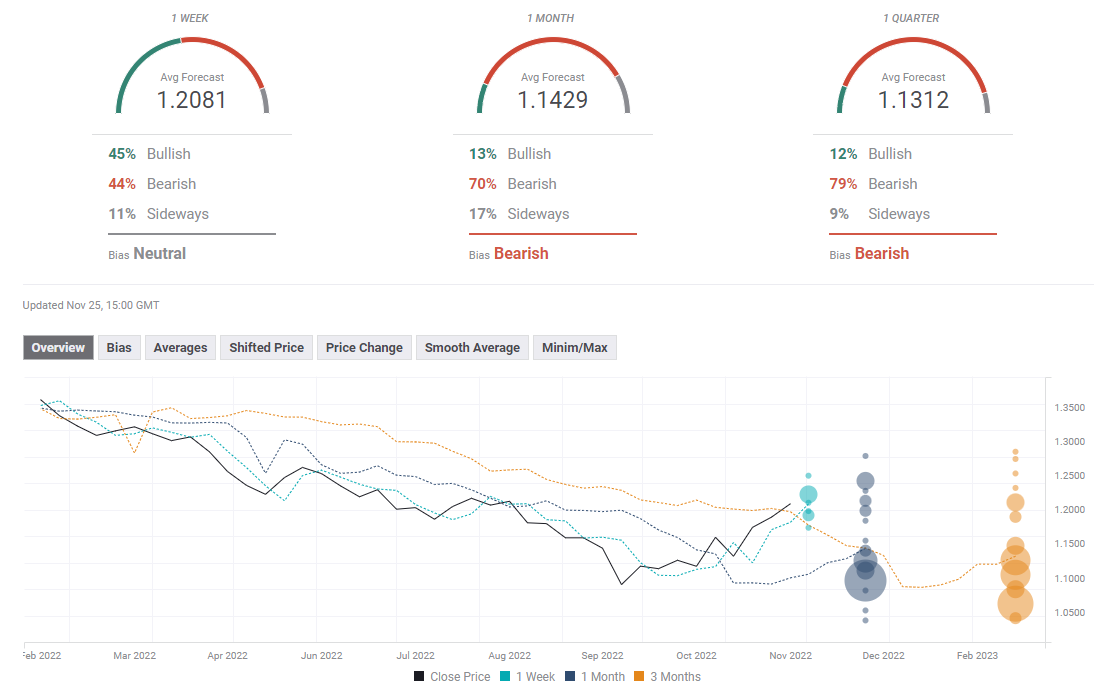