GBP/USD booked the second straight week of losses, as bears refused to give in amid hawkish Fed-driven sentiment and risk-aversion. Cable touched its lowest level since November below 1.3000, as King dollar reigned supreme, partly buoyed by the US bond market rout. With UK and US inflation dropping next week, the downside risks for the currency pair remain intact.

The risk-off flows and the dollar’s demand remained the central narrative this week, which revived the downside for GBP/USD after witnessing a consolidative phase a week ago. GBP/USD stood resilient at the start of the week, in the face of the heightening tensions between the West and Russia over Ukraine. Over the weekend, Ukraine accused Russia of mass killings of civilians in the Ukrainian city of Bucha. Russia declined committing any war crimes. These re-ignited tensions and prompted the US, Europe and the UK to propose additional sanctions against Moscow. Meanwhile, the greenback continued to cheer Friday’s upbeat US labor market report and hawkish comments from San Francisco Fed President Mary Daly, which fanned expectations of a 50 bps May Fed rate hike.

The major, however, changed its course and tumbled towards monthly lows, as risk-aversion bolstered haven demand for the buck amid increased expectations that the European Union (EU) will call for a ban on Russian energy imports. The sell-off extended into Wednesday, as the pair hit fresh monthly lows below 1.3050 on the renewed US dollar’s strength, in the wake of the relentless rise in the Treasury yields across the curve. Fed Vice Chairwoman Lael Brainard’s calls for a bigger rate hike and the balance sheet reduction in May, added extra legs to the rally in the yields as well as the dollar.

The pain for GBP bulls deepened after the Fed March meeting’s minutes delivered a hawkish surprise. The minutes revealed that the board members outlined plans to reduce the balance sheet by more than $1 trillion a year while hiking interest rates. This alongside the hawkish Fed commentary and upbeat US Services PMI data cemented a deal for a 50 bps lift-off in May, underscoring the monetary policy divergence between the Fed and the BOE.

Adding further to the pound’s misery, the UK announced a full asset freeze on the largest Russian bank while announcing to end all imports of Russian coal and oil by the end of 2022. St. Louis Fed President James Bullard said on Thursday, the central bank needs to hike its benchmark short-term borrowing rate to about 3.5%, which propelled the US dollar index to the highest level since May 2020 and the yields to a three-year top.

After a relatively data-light week, markets are bracing for an action-packed week ahead with top-tier economic data slated for release from both sides of the Atlantic. Nevertheless, it should be noted that it will be a holiday-shortened week, as the UK and European markets will be closed on Friday, in observance of Holy Friday.

Monday sees the UK monthly GDP dropping alongside the country’s Manufacturing and Industrial output data. The EU is set to discuss further sanctions on Monday, with an oil embargo on Russia likely on the cards.

Next of relevance for GBP traders will be the Kingdom’s labor market report due on Tuesday. The all-important US Consumer Price Index (CPI) will be also published later in Tuesday’s American session. That will be followed by the critical UK inflation data on Wednesday, with the rate already sitting at 30-year highs above 6%. The US Producers Price Index (PPI) will also hit that day.

On Thursday, the US Retail Sales, weekly Jobless Claims and Preliminary Michigan Consumer Sentiment data will keep traders busy amid a data-dry UK docket. Apart from the economic data releases, the Fed commentary and the incoming updates on the Ukraine crisis will drive the market sentiment. 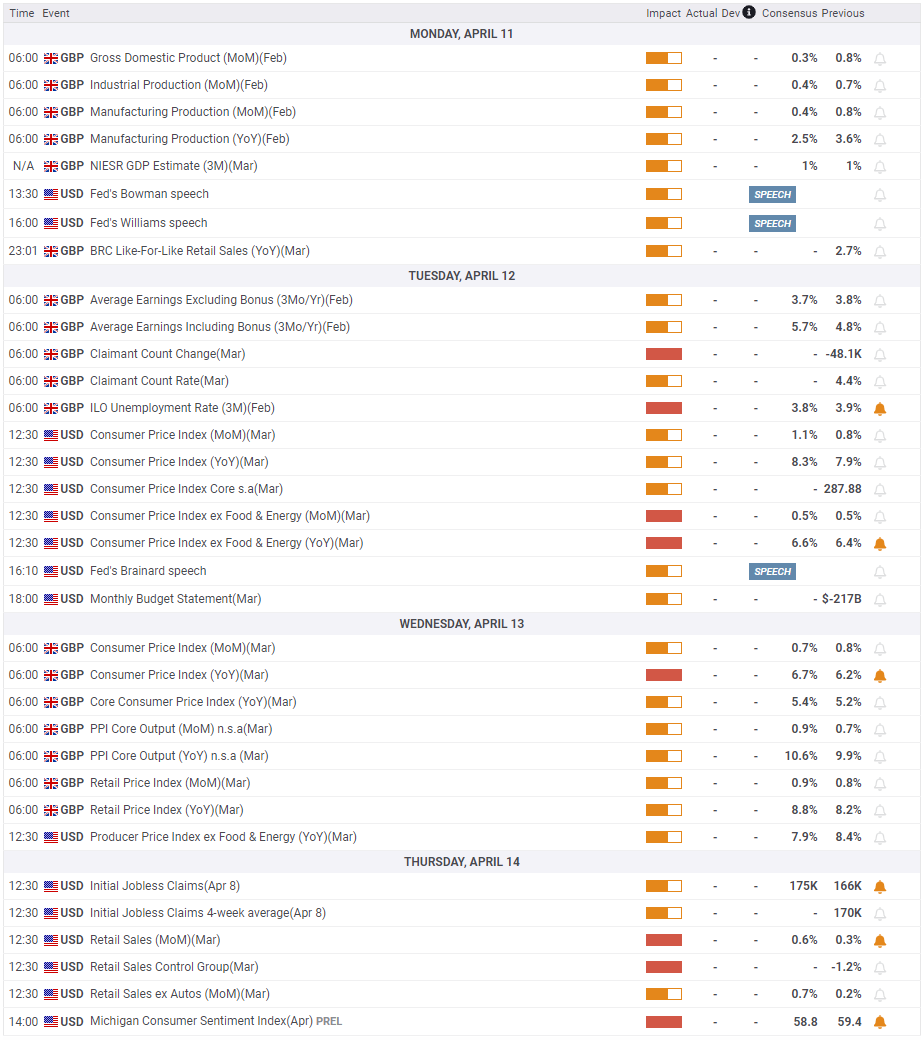 On the upside, 1.3100 (descending trend line, 200-week SMA) aligns as key resistance. In order to attract buyers, the British pound needs to clear that hurdle. In that case, 1.3150 (static level) and 1.3200 (static level, psychological level) could be seen as the next recovery targets.

Despite the fact that GBP/USD suffered heavy losses this week, experts see the pair staging a modest rebound toward the mid-1.3000s next week. The one-month outlook paints a mixed picture and the average target of 1.3052 could be seen as a sign pointing to a near-term consolidation. 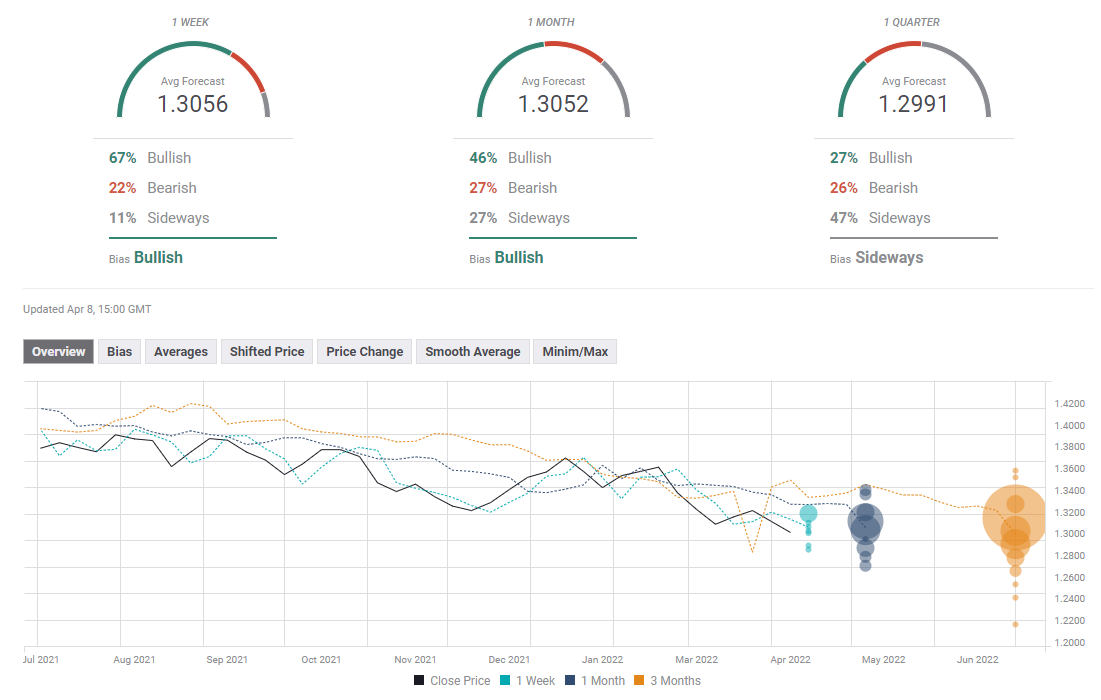