The US Dollar selling bias - led by the Fed Chair Jerome Powell's dovish sounding statement for the semi-annual Congressional testimony, remained unabated through the early part of Thursday's trading session and assisted the GBP/USD pair to extend its bounce from six-week lows. The pair climbed to weekly tops, around the 1.2570 region, but then started losing steam in reaction to hotter-than-expected US core CPI print.

In fact, the so-called core CPI - excluding food and energy prices, jumped 0.3% in June and marked the largest increase since January 2018, while the yearly rate also edged higher to 2.1% as against consensus estimates pointing to a stable reading of 2.0%. On the other hand, the headline CPI decelerated to 1.6% yearly rate in June as compared to 1.8% recorded in the previous month but was in line with market expectations.

In a delayed reaction to the latest US consumer inflation figures, a goodish pickup in the US Treasury bond yields helped the greenback to recover the early lost ground and turned out to be one of the key factors that kept a lid on any strong follow-through up-move for the major, rather exerted some intraday downward pressure. The pair, however, managed to regain some positive traction during the Asian session on Friday, though persistent fears of a no-deal Brexit and the UK political uncertainty might continue to cap the upside.

Currently hovering around mid-1.2500s, market participants now look forward to the BoE MPC Member Gertjan Vlieghe's scheduled speech for some impetus. Later during the early North-American session, the US PPI print for the month of June and comments by Chicago Fed President Charles Evans might further collaborate towards producing some short-term opportunities on the last trading day of the week.

Looking at the technical picture, the overnight upswing stalled near 38.2% Fibo. level of the 1.2784-1.2440 recent downfall, albeit the pullback remained support near the key 1.2500 psychological mark. Hence, it would be prudent to wait for a convincing break through the mentioned range before traders start placing any fresh directional bets. Momentum beyond the 1.2570 region (38.2% Fibo. level) is likely to confront a stiff resistance near the 1.2600 horizontal zone, above which a fresh bout of short-covering has the potential to continue lifting the pair further towards 61.8% Fibo. level - around the 1.2650 region en-route the 1.2700 round figure mark.

Alternatively, a sustained weakness below the 1.2500 handle, leading to a subsequent break through the 1.2480 horizontal area might turn the pair vulnerable to accelerate the slide towards the recent swing lows support near the 1.2440 region. A follow-through selling will pave the way for a move back towards challenging yearly lows, around the 1.2400-1.2395 area - coinciding with a four-month-old descending trend-channel and should act as a key trigger for any further near-term depreciating move. 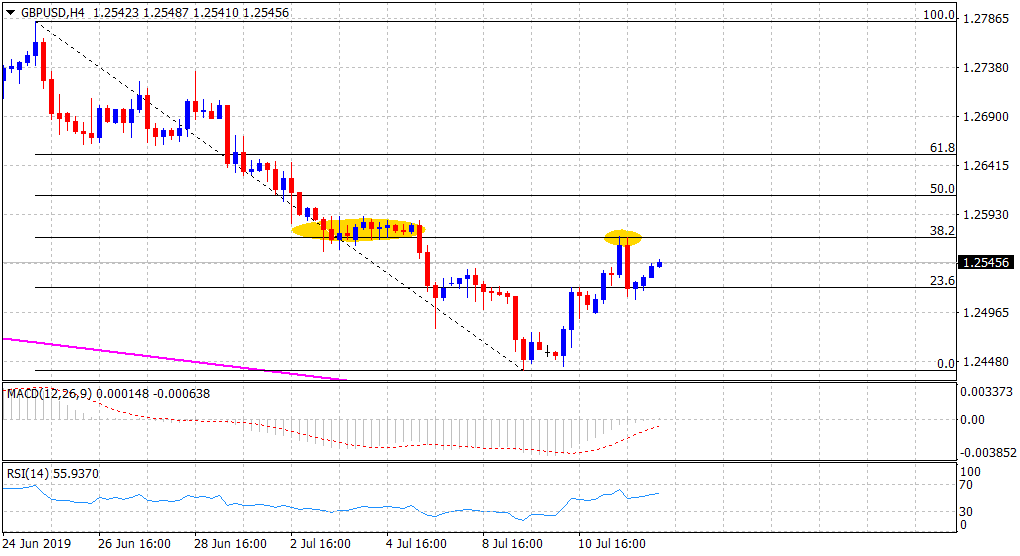 AUD/USD bulls stepping in on the US dollar's stalling, prospects are technically bullish

AUD/USD bears bailing out as price consolidates the down move. US dollar giving back some ground, could give rise to healthy upside correction in AUD crosses. Despite the market chatter about Reserve Bank of Australia cuts next month, AUD/USD is performing the bid in improved risk appetite.

EUR/USD bounces from fresh lows, risk skewed to the downside

EUR/USD trades in the 1.1670 price zone, as demand for the greenback eased during US trading hours, following dismal US employment-related data.

Gold has been moving in a downward trajectory since the greenback strength kicked in on 1st September. Since then, the greenback has broken out of consolidation zones in EUR/USD and most of the other majors.

WTI holding the $40's, but a fade on rallies is the technical playbook

WTI bulls taking the baton from the bears on Thursday against an otherwise technically bearish backdrop. Demand-side fundamentals demand greatly on a vaccine. Commodities are performing well as ...

Bitcoin and Ethereum rebound strongly and are poised for further gains

Bitcoin confirmed a 4-hour bear flag that got almost no continuation and went straight into a massive move towards $10,700. Similarly, Ethereum also bounced back up, although its bounce is comparatively weaker, it is trading at $347.