The GBP/USD pair broke down significantly on Tuesday and reached a fresh 2018 low level of 1.3150, weighed down by Brexit uncertainties. The UK Prime Minister Theresa May lost a key vote on her Brexit legislation in the House of Lords and an amendment to ensure a “meaningful vote” for Parliament on any deal with the European Union, leading to a lack of sweeping power for Brexit ministers, was seen exerting heavy downward pressure on the British Pound.

This coupled the ongoing US Dollar rally, despite escalating US-China trade tensions and flattening of the US Treasury bond yield curve, further collaborated to the pair's downfall to seven-month lows. The pair now seems to have entered a bearish consolidation phase and was seen oscillating in a narrow trading range through the Asian session on Wednesday. Traders now look for any signs of bearish exhaustion to take some advantage ahead of the BoE monetary policy decision on Thursday.

Technically, the pair on Tuesday fell below 50% Fibonacci retracement level of the 1.1987-1.4377 upsurge and hence, remains vulnerable to extend the downfall even below the 1.3100 handle, towards testing its next support near the 1.3040-30 region. The bearish break has the potential to continue dragging the pair further below the key 1.30 psychological mark towards testing 61.8% Fibonacci retracement level support near the 1.2910-1.2900 region.

On the flip side, any meaningful recovery attempt might now confront fresh supply near the 1.3200 handle, above which a bout of short-covering could assist the pair to make a fresh attempt towards reclaiming the 1.3300 round figure mark with some intermediate resistance near the 1.3250-60 region. 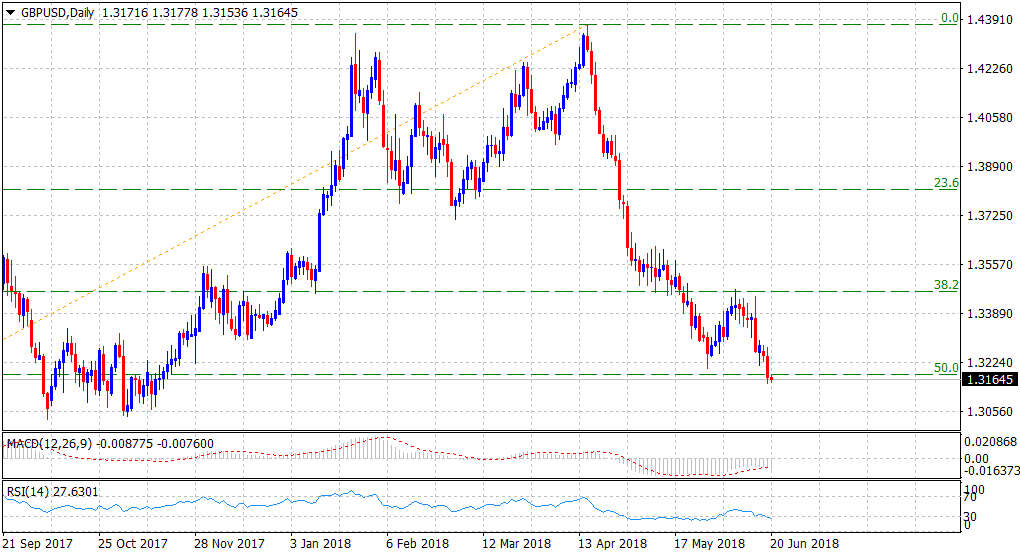